With episode 9 leaving off on the heated moment of Tanya and her armed forces launching several rockets into key Republican areas, I fully expected this episode to be the way that it was. The foreshadowing of Sioux in episode 8 and the beginning of this one heavily screamed “He’s got a bone to pick”, and I felt this whole episode was a build-up to his anticipated appearance. Earlier in the series, I wrote about the fantastic battle between Anson Sioux and Tanya in episode 7 and how it became this battle of ideological differences on war. Sioux was once a noble man, being one of few “morally good” characters we’ve had in the show. However, after his battle with Tanya, it’s obvious now that his mindset has completely changed, or perhaps it would be more accurate to say that this change was brought out by Tanya.

His inevitable confrontation of Tanya was something that was bound to happen, but the way it was handled so far seems a bit hollow and empty compared to previous ones. Because of the episode attempting to build up to this key moment, there was an immense amount of focus on the incline to the climax, rather than exploring the other ideas that this show normally never hesitates to bring up. That doesn’t mean this episode didn’t have its high points though.

After seeing what Sioux’s planning, we tread a lot of familiar ground with the war efforts, showing how the Empire continues to brutalize the Republicans into a losing situation with “Shock and Awe”. We see Tanya leading her battalion to search for the Republican bases to explode, treating the soldiers in her company rigidly as she continuously shouts to them, and interacting with her troops between battles in a lighthearted fashion.

Pretty typical results for anything Tanya’s battalion does.

While what Tanya was doing was crucial to the success of the Empire’s strategy, what interested me far more was the meeting the generals were taking part in during this operation. Back at the Empire headquarters, it seems some issues have arisen with the treasury about running out of funding before the war is over. This has been mentioned before, but now it has become a much larger issue, with the Empire fighting with no definite progress being made to win the war. The generals are confident that the plan will be executed and the war will soon end, although the treasury doesn’t seem convinced by their statements without any proof. What makes the interjection of these scenes a good choice on the episode’s behalf though is that we’ve seen very few scenes of the generals’ discussing war plans in the briefing room. This is the first time in the show that we’ve seen the military heads become pressured into a situation where they may not be able to win, even if that battle is a monetary one between the Empire’s government and the Empire’s military. This immensely adds to the political intrigue of the series, which hasn’t necessarily been the focus of the series too much in the 10 episode we’ve gotten so far.

This is one of many aspects of this episode that I have mixed feelings about. While I think it is cool that it’s another aspect of war being touched upon, I think the show is becoming a bit too scattered in terms of the ideas it wants to drive home, with many of the prior ideas (religion, morals of war, ect.) left completely untouched in this episode. Not to mention that beyond this single chain of scenes, these moments of political intrigue, which could easily become an important part of the narrative later, haven’t really played a huge part in my interest for the series, nor have I been given a reason to care about these generals failing due to lack of screen time and importance given to them. We had episode 4, with Zettour being a main focus, but he’s only played a minor role in the grand scheme of events. Tanya and the opposing armies have had much more influence on this show than anything the generals have done, besides maybe when they’re smoking in the briefing room laughing together at what they have planned next for Tanya and the Empire’s army.

Speaking of smoking, we find out that “Shock and Awe” has succeeded, which means the Empire can now execute their plan to eliminate the rest of the Republicans flank via a dynamite explosion triggered by a lone Republican cigarette. 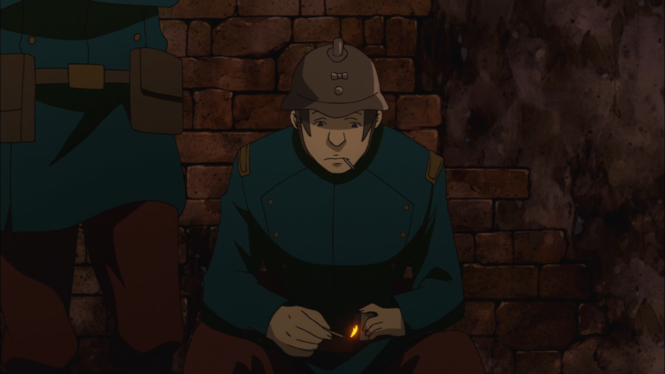 Seriously, whoever’s the writer must really hate smoking, since we’ve seen several instances of negative commentary on smoking within the series.

With this final piece of the puzzle in place (or I guess out of place, depending on how you look at it), the Empire can now lead into the final stage of the Empire’s plan, “Revolving Door”, which consists of taking over the exploded Republican camp and using that area to surround the advancing Republican flank on both sides.

However, our wounded mage lieutenant from the battle of Arene, now a messenger of the “Whiskey Dog” Republican forces, just so happened to see the atrocious explosion caused by the blatant ignorance of the Republican troops and the Empire’s cunning execution of a plan that went better than expected, and he’s not exactly thrilled to see an entire Republican unit blown to pieces by the same army that gave him his injuries. At first glance, this situation may seem remotely similar to the one Sioux experienced with his battle against Tanya, and while the similarities are there, as I’m sure “Whiskey Dog” will also enact his rage on Tanya if he had the chance, I would expect that his situation will be different, based on his actions and responses to events we’ve seen. “Whiskey Dog” seems a lot more terrified of the Empire army than Sioux is, whether that’s a difference in their scruples or how they view the Empire based on their experiences, and therefore, would probably react to an appearance by Tanya far differently than Sioux would.

As the episode comes to a close, the Empire and Tanya have both declared the Empire victorious before the battle is even won, and just as the blatant foreshadowing would suggest, Sioux uses this opportunity of weakness in Tanya’s unit to make a preemptive strike on her battalion unit as she’s attempting to flank the backside of the Republican forces. It’s clear from Sioux’s actions and demeanor that he means business, and he’s definitely not willing to play the noble hero this time around.

Poor Grantz. He can’t seem to catch a break when Tanya’s around.

While Tanya and company were obviously surprised by this attack, the show itself made this sort of setup seem obviously apparent to us, which is a bit of a disappointing for this series. On top of that, the unnecessary foreshadowing at the beginning, beyond the fact that it was unnecessary since they already showed him being rescued earlier in the series, allowed the show to leverage this moment in order to create a cliffhanger for the next episode to deal with. I don’t have a problem with the usage of a cliffhanger in this case, but I do have a problem with how it ended up being portrayed, as the surprise element of Sioux’s return would have been far more effective than seeing him early on, basically confirming that he’ll make an appearance at a point of overconfidence in the Empire. The cliffhanger itself could have been used effectively, creating the high tension and suspense of Sioux’s return, if it were not for the beginning of the episode. However, the foreshadowing at the beginning made nearly every major event that followed it, such as the Empire winning all of its battle, highly predictable and made this episode lacking in the exact thing a cliffhanger would be meant to create.

Comparing this episode to the other I disliked, episode 1, there were some striking similarities between them, one of which being that the battles in both were impressive and amazing to witness unfolding, but had no real meaning to them outside of that. In episode 1, I talk about the battle not meaning anything to us because we don’t know anything about it, but here, these battles don’t mean anything because there’s only one real outcome (for the Empire to win) in order to allow the events to unfold the way that they were foreshadowed to. Granted, there were other ways the battles could have theoretically unfolded, such as allowing the Empire to have their explosion backfire, but that would have created a thematic gap in what the Empire has displayed to us throughout the entire series, their extreme cunning ability to carry out brutal and gruesome plans that are effective in ways that no other army even attempts because of their questionable morality.

I’m glad to see his return, but not like this!

To avoid this situation entirely, the show should have just left out the beginning scene with Sioux, since the idea that he was already back was shown in episode 8. Personally, this would have made the cliffhanger felt rewarding to me as Sioux would have been out of sight for a while and also would have been unexpected and surprising, things that this episode seemed to be lacking in.

This episode was only new in terms of plot points and progression and had some new things to bring to the table, but are left up in the air as to what will actually become of them. Although, I don’t think it was terrible despite the problems I have with it. I also think the end of season production issues could be shining through a bit, as we’ve already seen the series go through a recap episode, which is a pretty sure sign of what’s happening behind the scenes. I’m not surprised that problems like this are happening, although it’s disappointing that we had many on-point episodes up until this one. However, I think it’s highly possible that this is a one-time fluke and that the show will bring back its fully glory next episode. We do have the battle against Tanya and Sioux happening next, which is something I’m extremely excited to see, even if the journey to get there was a bit rough.

I’m sure this battle will consist of more moral conflicts and ideological shifting on both of their behalves.

2 thoughts on “Youjo Senki Episode 10 – Back with a Vengeance”