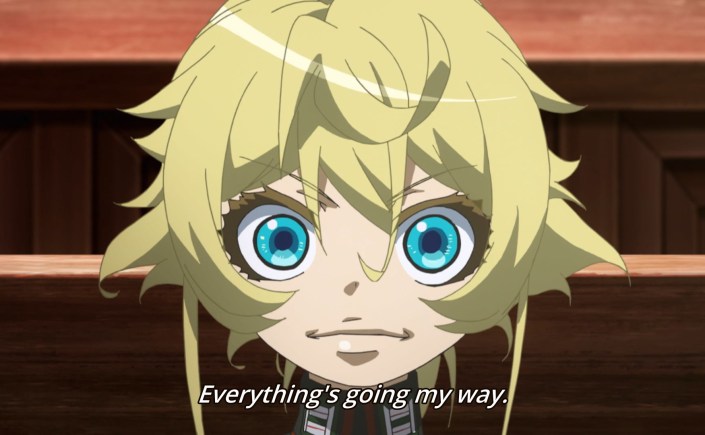 Before I began writing these episodic articles, I never realized how much a show could change over just the course of a few episodes. From episode 1 to episode 4, Youjo Senki has gone through an unbelievable transformation from a show with a disorganized lack of information to a more thrilling show about politics, religion, and morality. Some of the original complaints I had in episode 1 were only those of that episode, and others weren’t really relevant to the upcoming story, if only because I had no idea what kind of story this was. While I think the show’s themes are still a bit mixed, episode 4 has started really delving into Tanya’s personality beyond the fact that she’s an evil militaristic girl that just wants to follow the rules.

One of the facets of her personality that we see in this episode is how her devilish personality interacts with other people at the military academy, including superior officers that have more control of her situation than she does; something we’ve yet to really see from this show. So far, Tanya has had only a few factors being put against her, such as having a necklace of powers that can only be controlled by religious spells, and religion is something she obviously cares less about than the lives of the soldiers she’s purposefully killed off in previous episodes. We’ve also seen Tanya getting promotions based on her merits and her getting away with some of the more evil actions she’s done, simply because she’s effective at her job. This all changes within episode 4.

In episode 4, we get to see this transition from how the world may seem to be tilted in Tanya’s favor, but in reality, she controls very little about her own situation, and we get to see her frustration that stems from that loss of control. Near the beginning of the episode, we have a scene in a lecture hall that displays Tanya’s usual personality when presented a fictitious military scenario by the officer instructing the class. When asked what the appropriate course of action to take regarding a unit that disobeys a commanding officer’s orders, she suggests to punish them all, but if a senior officer was present, then they should solely be blamed for their unit’s course of action. This response is an interesting telling of Tanya’s personality though, as it not only shows her strict stance regarding how rules should be followed, but also how quickly she passed the blame to a commanding officer, despite them having little to no influence on the situation at hand. Perhaps Tanya is just that unforgiving on rule breakers, but my theory is that this is a telling moment of her true personality, which also may explain why “being X” has placed her in this situation to begin with. 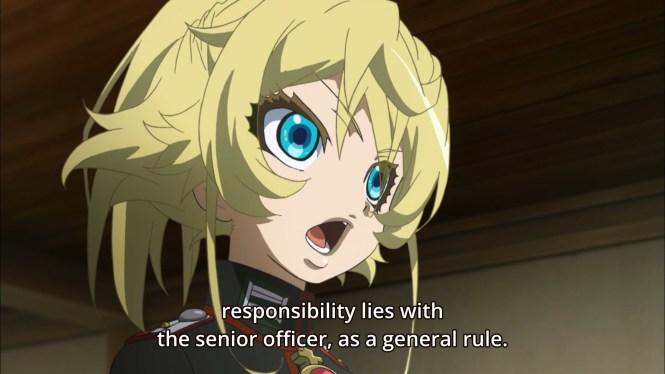 One question that I’ve constantly had since the reveal of her salary man backstory in episode 2 was “Why does Tanya act the way she does?”. Sure, people can just follow the rules because that’s the kind of person they are, but Tanya’s case seems to be too extreme for only this to be an influencing factor. Besides, I doubt having an evil character that succeeds all of the time without any limiting factors as the main protagonist of a show wouldn’t exactly be a very captivating thing to watch (i.e. episode 1). However, this episode seemed to have hinted at some underlying reasoning as to why Tanya is so against the concept of religion and, by proxy, having her actions manipulated by factors she cannot inherently influence. Tanya is extremely selfish when it comes to benefiting from her own situation, and any scenario out of her control that poses a threat to her benefiting is seen as a detriment to her and will do anything to eliminate this threat.

This can be seen from a scene in Episode 4, with an introduction to Hans von Zettour, a highly respected CO military strategist. Tanya’s first major conversation with him discusses the future possibility of a full-scale world war, and Zettour asks her what she would do to circumvent the possibility of them losing with minimal losses to resources and manpower. During this conversation, Tanya feels like she has full control over the situation, as being from a similar alternative reality with a similar history, she can use her knowledge to effectively plan what the best plan of action would be. However, as the conversation continues, Zettour continues to constantly challenge her ideas by asking her why she wouldn’t try to all-out win the war instead of just trying to win via attrition. 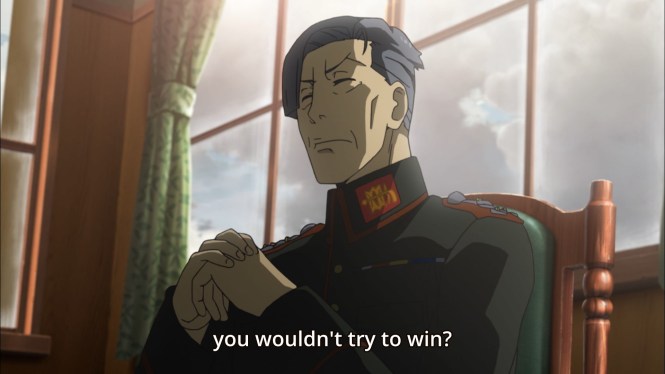 To counteract this remark, she had to present a brave and outlandish idea to him, which is why she suggested a small battalion of mages to specifically be used for strategical strikes, thinking there’s no way anyone would accept the idea of a whole unit designated to be used specifically for suicide missions. In reality though, she only suggested this idea to prevent herself from being on one of the front-line units. You can even see in her eyes and expressions from this conversation that this is a true, genuine fear of hers. So why would one of the strongest forces of the military be afraid of returning to the front lines, if it were not because of fear of losing control of her future, and possibly her life? 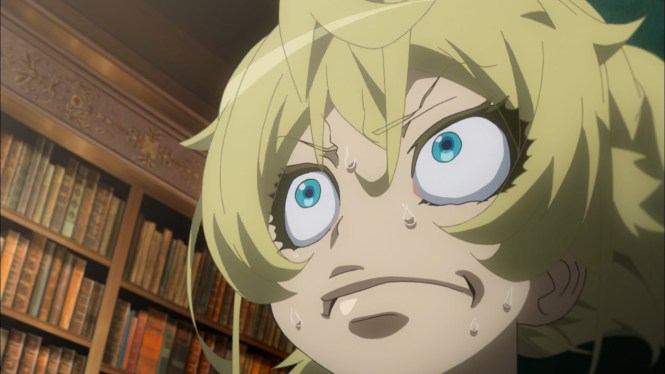 The expressions of this scene were really spot on in portraying Tanya’s fears.

Zettour, just like “being X”, seems to have this ability to manipulate Tanya in doing what he wants her to do, as later in the episode, he forcibly pressures her to take a suicidal job on the front lines, even for one of the best soldiers in their army. She also easily cannot go against what these officers say either, as her precarious situation would become even more life-threatening and dangerous to not only her life, but also her gained prestige and favoritism among the higher-ups. While it’s still unclear what the exact reasoning of her fear may be, it is clear that Tanya does somewhat fear a higher being’s influence, whether that be because of the possibility of an unsavory reincarnation by “being X”, or because of her loss of status and power via the higher-ups of the military, such as Zettour.

Near the end of the episode, we see one last instance of a higher power’s influence, which really seals the deal that this is definitely something beyond her control and cannot even actively or willfully fight at this point. While sending out flyers to recruit for the new front-line strategical battalion she’s commanding, something she ironically came up with to avoid front-line combat, she made the flyers in a way that would be unappealing to the recruits to prevent her from having to actually form this battalion. Yet surprisingly, she received abundant amounts of applications, so many that she complained that it would take forever to go through them, inevitably delaying her deployment onto the battlefield (which, of course, she was perfectly fine with). Yet again, almost perfectly after she comments about this, help is sent to her (in the form of Viktoriya) to help sort through the applications quickly, negating that factor as well. The world shown to us in the previous episodes may have catered to Tanya, but quickly the tables have turned against her in almost every circumstance. 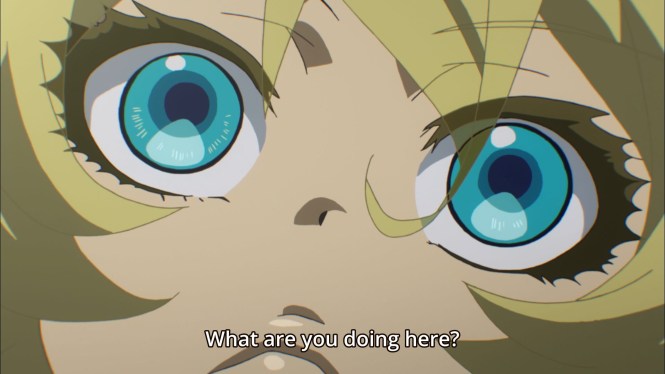 Whether this may be because of “being X”s influence upon this world, or Zettour’s mighty strategic capabilities and connections with other military higher-ups (both of them being somehow connected is also a possibility), it seems like Tanya won’t be getting any easy breaks anytime soon.