For the week or so leading up to this week’s episode of Youjo Senki, I had been honestly pretty excited to see how the end of the previous episode would pan out. I found myself largely in the camp of Owningmatt93 with regards to my expectations for the ensuing battle between Tanya and Sioux; though the buildup and the climax of episode 10 did feel a tad hamfisted in introducing Sioux’s return, I felt pretty confident that “[the] battle [would] consist of more moral conflicts and ideological shifting on both of their behalves,” and that, in general, it would just be a pretty impressive showdown. With the way the show had been slowly creeping up on how Sioux had supposedly gained the power of Being X and was making preparations explicitly to take Tanya down, the resolution of this grudge match had to be something impressive, right?

In what seemed to be a bizarre turn of events, episode 11 began with the last two minutes of episode 10. No editing, no re-cuts, nothing. Just a wholesale copying and pasting of what happened last week. There’s nothing necessarily wrong with this, and plenty of other shows have done so before to a fairly decent effect. What was wrong with this particular instance was that for the next minute or so before the opening credits, we simply had Sioux’s company reporting that they can’t get through to command via radio and that they need to engage and take out Tanya’s force, and we also see Tanya and her company scrambling around and firing off shots, with Tanya emphasizing extreme caution due to them being outnumbered and ambushed. In essence, nothing happened. Roll opening credits. One OP later, we’re five minutes into the episode, and more or less, nothing that is either new or terribly important has happened. I don’t want to seem overly nitpicky about this, but it just feels odd that after so much buildup beforehand, the show would essentially throw away a good quarter of its airtime.

Buddy, do I have some bad news for you.

This empty start isn’t the core of my beef with this episode, though. Odd pacing for the first few minutes is not a sure-kill blow for an episode, as it is more than possible for amazing things to happen later on and carry the rest of an episode to new heights. The issue is that there aren’t many other heights for the episode to climb to, and especially not with the battle between Tanya and Sioux. Honestly, we don’t even see Sioux until a good two minutes after the episode really begins. Up until then, it’s pretty standard stuff – Tanya’s force, though under pressure and outmanned, manage to use their wits and skills to take out a good chunk of the enemy, with only two generic soldiers of their own being gunned down. The stakes do appear to raise a bit when Sioux makes his re-entry, however. His treaty-defying trench gun (which in this case becomes a magic-powered shotgun) causes Tanya some trouble, and it does down Koenig and Neumann. After some flashy dogfighting, Tanya and Sioux come face-to-face in single combat among the clouds, Sioux staring Tanya down with his trench gun, and she with his automatic rifle from his daughter. Tanya expertly disarms Sioux and follows up with a trench knife to the gut, except this does not kill him – it almost (almost) seems as though he planned for this to happen. Instead, with a huge grin on his face, he decides to go full Being X-powered magic nuclear, attempting to make himself into a bomb using his newfound power and holding Tanya within the blast range. In what seems like a last-minute save, though, Viktoriya fires a shot through Sioux’s chest and Tanya’s left arm, freeing her from his grasp, after which Tanya unloads a staggering amount of blasts into him. As if you expected anything else, though, he’s not dead, and he still kamikazes straight into Tanya as his final effort against her. This explosion is enormous. It’s actually ridiculous how much power is packed into this thing, given its source. 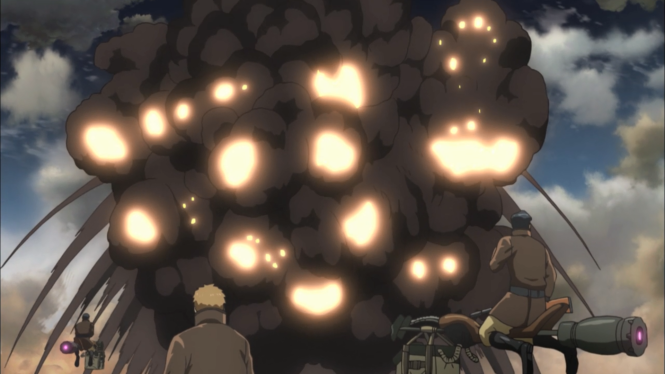 And, of course, Tanya isn’t dead.

She’s a bit bloodied up from the explosion that vaporized Sioux and she wipes away the smoke, spouting some one-liner about supposed to be having the upper hand. In fact, aside from Sioux and a few others of his crew, nobody is dead! Tanya, who is bleeding from her head and has a hole through her arm? She’s just dandy. The members of the Rapid-Response Mage Battalion that Sioux shot down? They’re fine. They’re in a bad place, but they’re sprouting grins and thumbs-ups as if the whole thing was just one big joke. Frankly, it feels that way. Really, this is where my biggest issue with this episode, and so far with the entire show, comes into play – Sioux ends up being a joke in this episode. 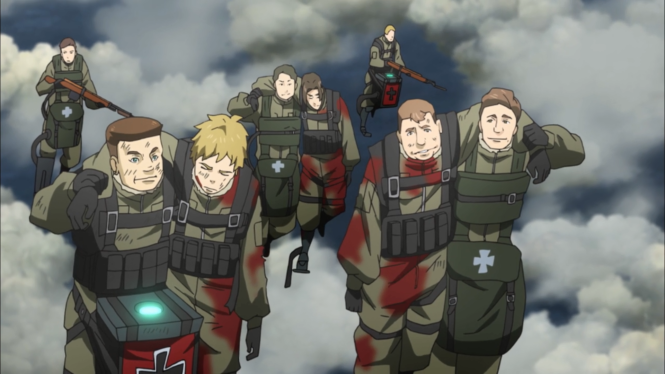 Everyone is fine, that’s just a lot of spilled ketchup.

We were introduced to Anson Sioux in episode two, when Tanya cemented herself as an ace and laid waste to his company. From then on, while he wasn’t a main focus of the series, we saw Sioux continue to develop as the series went on. We learned about him and his family. We found his convictions, and his thoughts about honor, being a soldier.. We saw him promoted. We even saw him seem to die at the hands of Tanya, who batted him away almost effortlessly and stole his gun from him. We saw his seeming resurrection and recruitment by Being X, and by that point, I expected great things. However, despite all of this, despite his fairly fleshed-out character, despite the divine aid he is given, he fails to kill several mages who are caught off-guard, his parting blow is essentially a light bonk against Tanya, and he is given, I believe, a whopping two lines of dialogue in the entire episode, both of which you would expect some unimportant NPC to say. It’s seriously crazy how hard Sioux gets shafted in this episode, because all of the foreshadowing and character development and buildup we received over the rest of the series is resolved in essentially three minutes with him essentially amounting to nothing.

It’s such a shame, because man, did he get some cool points here and there.

Now, I realize that, in a way, it is just a continuation of his and Tanya’s history – Tanya would almost effortlessly dispatch him or his subordinates, and this was no different. Also, this follows the pattern for Tanya’s ongoing struggle with Being X – X throws something Tanya’s way, and she fights it off, again, without an extreme amount of stress. I realize that Sioux’s sad attempt at vengeance continues these narrative threads, but that doesn’t keep it from feeling as though this confrontation and ending of Sioux’s cycle was rushed and entirely lackluster, considering the history that his character built up over the course of the series. Now, granted, I have not read the light novels, and for all I know, maybe we actually get a more detailed view of Sioux and his state of mind leading up to his confrontation with Tanya. Perhaps time was short for what they wanted to cover in the anime adaptation and Sioux’s story simply got cut for time. I certainly hope that this is the case, but I just don’t know.

Oh, right, and the other half of the episode happened.

To keep this brief, the Fatherland won the war, a treaty was signed, and the Empire’s forces began, as they term them, “cleanup operations.” While our mage battalion boys show off their chiseled bods in the shortest simulacra of a beach episode ever, Tanya finds herself still at the office, bored with nothing to do. However, after a brief chat with Viktoriya, Tanya discovers that a full-stop end to the war has not been declared, only an armistice, and that the Republican forces have converged at Brest Military Port, where their Navy is slated to withdraw. She realizes that the Republican forces are retreating in order to regroup, and that the war is far from over if they do not eliminate the rest of the Republican forces at Brest. However, after pleading with the upper command to allow her to go, and even after threatening to instead simply engage in “force reconnaissance” of her own will, Tanya is commanded by the highest of military authorities to stand down by way of armistice order. In short, if Tanya were to engage the forces at Brest Military Port, she could be executed for disobeying superior orders, and if we have learned nothing about Tanya through this whole series, she is quite stringent about following the orders of superiors.

Yeah, wow, super weird, right? Maybe something you might want to investigate! Or be wary of! No? You’re good? Just going to get sloshed and sign some papers? Okay! You’re the bosses!

Despite the enormous diatribe above against the first half of the episode, the thing is, I genuinely enjoyed this latter half of the episode. I ended the episode feeling genuinely curious about what the Republic could possibly be planning to do with its short window of opportunity, and I’m left wondering what the show plans to do to top what it has set forth in previous episodes. We are left seeing Tanya perhaps be the most emotional she has ever been in the show. She screams, almost cries, and punches her knuckles red alone in the barracks. After fighting so hard for so long, she could have ended the war for good. She saw her chance, and it was snatched away from her. It’s devastating, and it’s fascinating to see Tanya losing this degree of control, with such potentially huge consequences. In a way, I suppose this episode brought with it two forms of disappointment – the first is of disappointment in the show and its nonchalance in killing off Sioux, and the second a sense of unease and disappointment that Tanya was unable to enact what she felt was necessary to prevent any future bloodshed in the war. I’m conflicted about this episode, finding that I hold polar opposite feelings about its two halves, and I genuinely hope that this is not the trend as the season draws close to its conclusion.

If nothing else, we got to see battlemage booty.