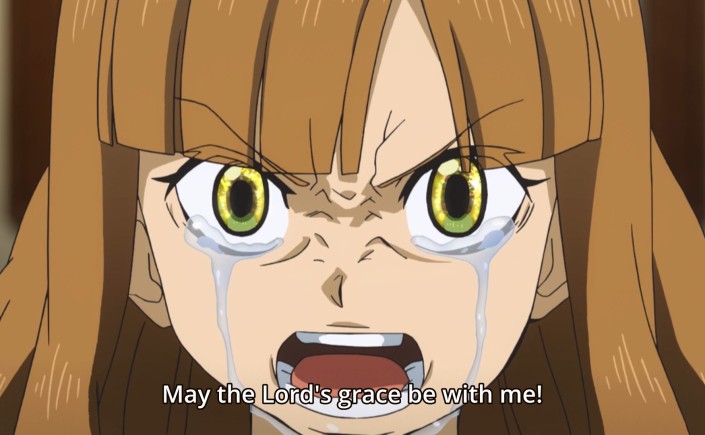 So now we’ve reached the conclusion of this season… of sorts.  I can actually appreciate that for an adaption of a much longer light novel series, they were unafraid to leave the door as wide open as they possibly could make it.  In fact, strangely enough, I’d argue that this whole ending episode may start as a wrap-up but then immediately takes a left turn and becomes a massive build-up that left me desperately craving a second season in the best of ways.  With the initial war wrapped up, we suddenly find the Empire exhausted and pushed to the limit as forces on all sides, fresh and new, gear up for round two.  On top of this, we have a hint at some real shit coming Tanya’s way straight from America in the best way possible and I cannot wait to see that showdown.  Kudos and applause for giving me that craving, Youjo Senki.  Now don’t leave me hanging for that season two.

“…Please don’t let this studio go under till I get more.”

END_OF_DOCUMENT_TOKEN_TO_BE_REPLACED 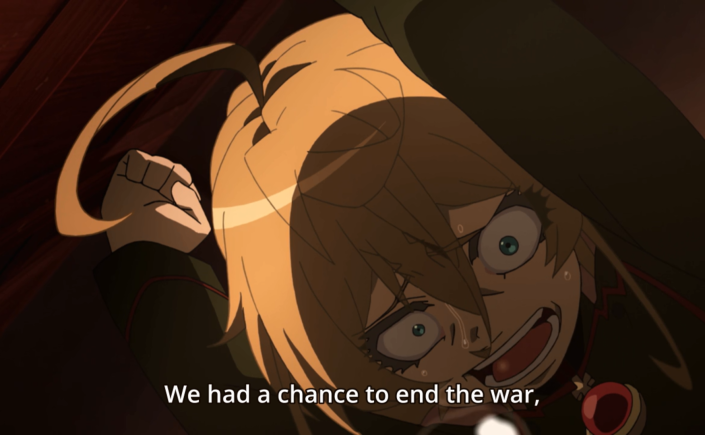 For the week or so leading up to this week’s episode of Youjo Senki, I had been honestly pretty excited to see how the end of the previous episode would pan out. I found myself largely in the camp of Owningmatt93 with regards to my expectations for the ensuing battle between Tanya and Sioux; though the buildup and the climax of episode 10 did feel a tad hamfisted in introducing Sioux’s return, I felt pretty confident that “[the] battle [would] consist of more moral conflicts and ideological shifting on both of their behalves,” and that, in general, it would just be a pretty impressive showdown. With the way the show had been slowly creeping up on how Sioux had supposedly gained the power of Being X and was making preparations explicitly to take Tanya down, the resolution of this grudge match had to be something impressive, right?

With episode 9 leaving off on the heated moment of Tanya and her armed forces launching several rockets into key Republican areas, I fully expected this episode to be the way that it was. The foreshadowing of Sioux in episode 8 and the beginning of this one heavily screamed “He’s got a bone to pick”, and I felt this whole episode was a build-up to his anticipated appearance. Earlier in the series, I wrote about the fantastic battle between Anson Sioux and Tanya in episode 7 and how it became this battle of ideological differences on war. Sioux was once a noble man, being one of few “morally good” characters we’ve had in the show. However, after his battle with Tanya, it’s obvious now that his mindset has completely changed, or perhaps it would be more accurate to say that this change was brought out by Tanya.

His inevitable confrontation of Tanya was something that was bound to happen, but the way it was handled so far seems a bit hollow and empty compared to previous ones. Because of the episode attempting to build up to this key moment, there was an immense amount of focus on the incline to the climax, rather than exploring the other ideas that this show normally never hesitates to bring up. That doesn’t mean this episode didn’t have its high points though.

END_OF_DOCUMENT_TOKEN_TO_BE_REPLACED For a show I was mixed about at the start, I have to say they’ve sold me on this story.  This has gone on to be an incredible ride and this episode was definitely my favorite so far.  We have action, comedy, evil, struggle for survival, and an explosive ending that teases the end of a world war!  Tune in at ten for the action!  (Check your local listings for channel information.)

To be serious for a moment, Tanya has come a long way since the beginning of her journey, rising through ranks and becoming an accomplished leader.  Yet we also see why this show has such a dark and enticing title, especially with the horrifying decisions our protagonist decided to make last episode, sweeping away responsibility and hiding behind a very apathetic defense that wouldn’t quite hold up in the Nuremberg Trials. 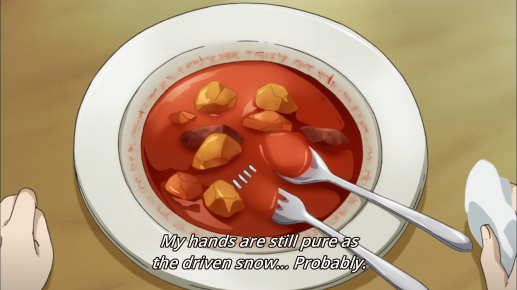 “And my stew is as bloody as the innocents I’ve sentenced to die.  Man, I love contrasting metaphor!”

END_OF_DOCUMENT_TOKEN_TO_BE_REPLACED 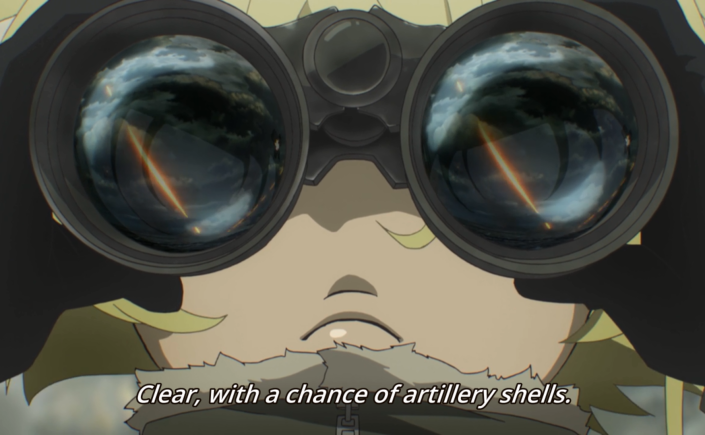 Episode 7 of Youjo Senki presented us with a view of the ongoing war not just from the perspective of Tanya and the Empire, but also from that of Entente soldier Anson Sioux. Among other things, such as giving a perspective from outside the Empire, expertly weaving in tonal shifts that made for a rather dramatic and fantastic episode, and fully fleshing out Sioux as a solid, memorable side character, episode 7 used these factors to give the viewer pause and to really consider the morality of the war.

END_OF_DOCUMENT_TOKEN_TO_BE_REPLACED 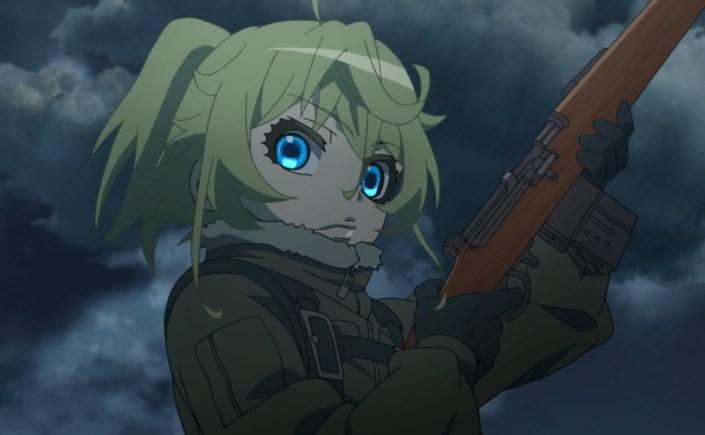 In previous episodes, we’ve seen Tanya constantly struggling to have more influence over “Being X” than it does over her, and episode 6 was yet another beautiful example of this. Youjo Senki seems to definitely be letting the viewer decide which side is actually the “good” or the “evil” sides, as both sides have their own stories to tell. This can be seen throughout most of the show, with “Being X” forcing these continuous brutal punishments upon her for just merely not believing in a higher power, and also in the past two episodes, seeing a more light-hearted and less merciless side of Tanya than ever before. Similar things could be said about the escalating war between nations. Which side is actually the “evil” one and which side is “good”?

END_OF_DOCUMENT_TOKEN_TO_BE_REPLACED And now we reach that wonderful halfway point in the series.  In my experience, it’s when things start to make sense or it’s usually when I drop an anime.  Luckily for our adorable little salary man, this show has grown and developed significantly since that first episode, with episode five definitely ending on a high point.  Tanya has risen through military ranks and has combated hardships brought on by a controlling deity to now be in charge of her own battalion.  With their first taste of action in their last battle (although you could call it a slaughter), Tanya and company are off to where the real fighting is, ready to show the world who the hell they think they are.

END_OF_DOCUMENT_TOKEN_TO_BE_REPLACED

Episode 1 of Youjo Senki introduced us of Tanya the Evil through the eyes of Viktoriya Serebryakov. We saw her battle prowess as a hardened Lieutenant for the country of the Fatherland, and we also saw her ruthlessness in terms of management and her drive to do whatever is most in line with efficiency for her country. However, we had no idea how Tanya got to this point, and the mysterious backstory of Tanya as a reincarnated salaryman was only briefly touched on. All in all, while the episode itself was solid in terms of hooking me into the show, it didn’t give us a strong frame of reference to base anything off of.

In the first post in this series, Owningmatt mentioned that “The underlying issue with this episode’s focus on characterization [. . .] is the massive amount of exposition being done about various events taking place in the setting, yet none of it really seems to explain the details needed for the viewer to really grasp the workings of the world itself.” This is a fairly unsavory issue for a first episode to have, to be sure – an unsteady flow of ideas and information about a series and the world that it attempts to build can be greatly detrimental to grabbing and holding the attention of viewers. Although this is the case for the series premiere, episode 2 of Youjo Senki corrects this janky world-building with a far more in-depth history of Tanya’s time before and after her transportation to this new world. And there aren’t any vague, unhelpful maps, either.