Episode 7 of Youjo Senki presented us with a view of the ongoing war not just from the perspective of Tanya and the Empire, but also from that of Entente soldier Anson Sioux. Among other things, such as giving a perspective from outside the Empire, expertly weaving in tonal shifts that made for a rather dramatic and fantastic episode, and fully fleshing out Sioux as a solid, memorable side character, episode 7 used these factors to give the viewer pause and to really consider the morality of the war.

In much the same way, episode 8, “Trial By Fire,” sends up another consideration about whether or not the war being fought and the acts required by the higher-ups of the Empire are just. While this episode is in some ways a return to form in that it focuses largely on Tanya and her response to the situations she finds herself in unwillingly, we also see it loosely focus on Second Lieutenant Warren Grantz – a promising but somewhat headstrong officer of the 203rd Mage Battalion. In the beginning of the episode, we find that Grantz is rather enthusiastic about his wartime position, as he seems to enjoy his deployment and the way that he and his company can so effortlessly eliminate the military forces of Entente. There’s a youthful sort of gusto about the way in which he carries himself on the battlefield, and in some ways, it is slightly reminiscent of Tanya, though admittedly much, much less maniacal in his enjoyment of fulfilling his duties as a soldier of the Empire. He genuinely doesn’t seem to question the orders that he is given, and freely goes along with whatever comes his way via Tanya. We see this change, however, when he receives word of the next mission he and the Battalion are set to carry out. 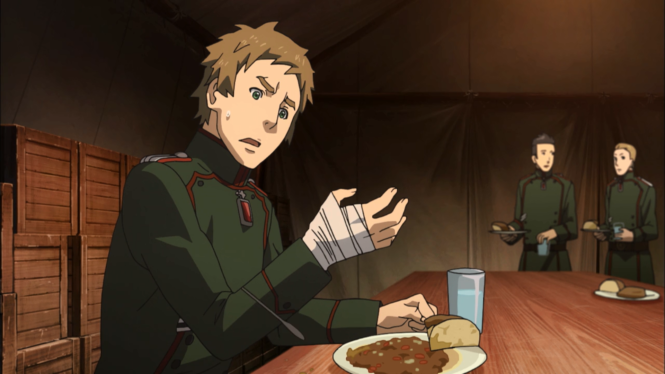 By the end of this episode, dropping your spoon is going to be the least of your worries, my dude.

In an unexpected turn of events, the city of Arene, which was captured not long ago by Empire forces, is taken over by rebel civilian forces and a band of Republican force mages that have assisted in the re-capturing of the city. Being the Empire’s ace in the hole, Tanya and the 203rd are tasked with taking back the city by any means necessary. There is a problem, though – the city was taken initially through the defeat of military forces outside of the city, and thus, no fighting was to be done within city grounds. Now, however, Tanya is faced with the mission of taking a city, which currently houses civilians as well as Entente mage forces, through armed measures. Firing on civilians is, of course, a definite no-can-do. We’re talking war crimes here. However, using a paper that Tanya wrote in Army Academy as a basis for tactics, the Empire found a loophole of sorts to make doing so “legal”: if they send out an evacuation order before they begin their assault, everyone that remains in Arene is, according to their reasoning, technically a Republican soldier. And since they are technically enemy forces, they fall under the order to “eliminate all hostile forces in the city.”

If this isn’t a good sign for the rest of the episode, I don’t know what to tell you.

We’ve already seen that Tanya is ruthless; this is hardly a point that is up for debate. What we have not seen, however, is that Tanya is ruthless to the point that she will happily go along with shaky reasoning used to mow down civilians in order to advance the military expansion of the Empire. That is, not until now. When briefed about this plan, she states, with a smile on her face, that as a soldier, “if orders say to burn beautiful Arene to the ground, that is what we must do.” There is some obvious discomfort among the 203rd Battalion when the mission is given to them, but perhaps most so in that of Second Lieutenant Grantz. Grantz is understandably upset by the thought of potentially firing on civilians in Arene, and he asks flat-out, “Is this really okay?” Slight spoiler for you: no, but you’re going to do it anyway.

As viewers, at this point in the show, we might be asking the same thing, though if we are being completely honest, such a development shouldn’t really come as a surprise to us when the show itself is called The Saga of Tanya the Evil, and when the show itself has taken upon itself to give us solid proof to see that that name is justified. Episode 7 gave us an opportunity to consider whether or not Tanya’s actions were truly good or evil through how she approached her battle against the ambushed Entente forces, but this episode gives us a completely different reason to reconsider this. Is the decision to fire on the citizens of Arene really okay? 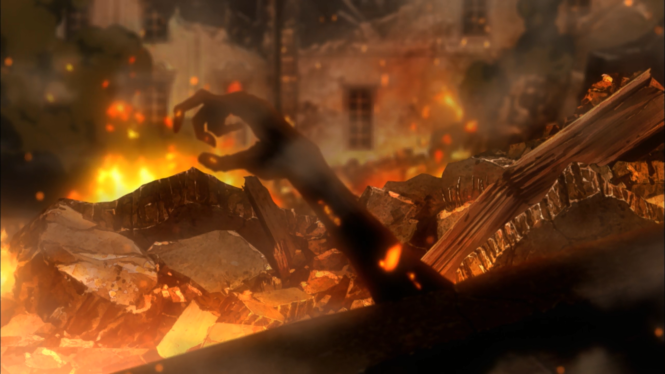 If we are to go by the way in which the episode depicts the during and after of the assault, it most definitely is not. Once the evacuation order goes out, the artillery fire begins, and it is gruesome. The show does not shy away from the horrors that are committed, whether it is showing lone children staring down their burning homes, bloodied bodies buried under rubble, or black-charred corpses in mangled positions. Grantz has a tough time reconciling this. There are times when the genuine horror on his face as he carries out his duties is honestly haunting. For a time, he attempts to tell himself that it’s for the best, and that he is doing what he is doing in order to help people. This only lasts so long for him, though, before he finally breaks and confronts Tanya, trying to convince her not to fire on the mages guarding civilians. In the way that only Tanya can, she beats Grantz into the realization that if they let those civilians go with rage in their hearts, that they will come back in years ahead to face the Empire. What it ultimately comes down to for Tanya, however, is that it is an order from their superiors. To break that chain of command, to go against that rule, is unthinkable. In the end, Grantz cannot defy this order, and with tears in his eyes, he complies.

Bet you’re wishing for that dropped spoon by this point.

Closing out this episode, we find that both Tanya and Grantz have followed orders because they are orders. However, this submission has obviously affected the two in quite different ways. Grantz is, to say the absolute least, quite shaken by the experience, and it is uncertain whether or not he will ever be the same. Tanya, however, does not so much as bat an eye. As she puts it, she followed the conventions she needed to in order to make her tactics legal and to make her mission accomplishable. If she had to take the lives of some civilians in the process, so be it. In this, we have seen Tanya at perhaps the cruelest point in the series so far. Being ruthless in the training of her soldiers is one thing. So too is the nonchalance with which she annihilated the Entente forces as well as countless others in episodes prior. But the killing of civilians with her only hesitation being that it would be difficult to make doing so legal gives us an entirely new perception of her title of the Devil of the Rhine. Perhaps in response to this, it is fitting that, in the last minute of the episode, we see that Being X has chosen another champion – and he has been given the mission of destroying Tanya. Only time will tell how this plays out, but if nothing else, this episode has shown us the extent to which Tanya’s callousness reaches, for now, at least. And of course, shit is about to get very real in the next few episodes.