For any of the 3D YouTube video links, up the resolution as high as will run on your computer. It’ll look like garbage otherwise because 3D uses a different standard for resolutions.

Also, I have not seen the full performance.  These ideas are taken from what parts are available online and what research I could find after diving into articles written about the show.

It’s a dark venue.  The stage is set up sparsely, with no instruments present, only three backing screens against the wall and a veiled screen on center stage.  All of a sudden, the music starts and the three screens light up to display very ethereal and blue landscapes that don’t follow conventions of design or reason.  Amongst the cacophony of electronic sound and imagery, a blue light materializes on the veiled screen and from the light emerges a girl, an idol in virtual form with humanoid features, but not nearly human enough.  She begins to sing. 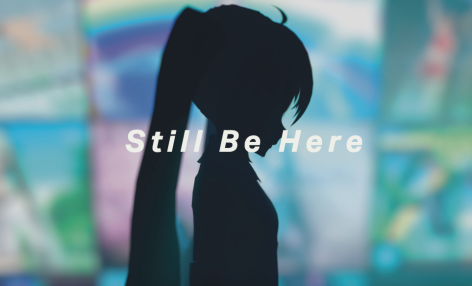 At first glance, it almost seems like I’m describing a modern version of the opera scene from The Fifth Element and honestly, the alien nature and style wouldn’t be far off from this performance. In fact, though, I’m referring to an art show put on at the CTM Festival in Berlin that was all about Hatsune Miku.  If you tend to tune out when people start to go Ga Ga for Vocaloids, bear with me. This show might interest you specifically.

See, something was different about this show, and it wasn’t just that the exhibitors were calling it an art exhibit instead of Miku’s typical “concerts”.  It was something about the performer herself that seemed off.  Where Vocaloids (characters initially created to advertise synthetic voice software) are typically displayed as peppy holograms singing and dancing to rock ballads and pop music amongst massive laser light shows and expertly made realistic choreography, this exhibit had none of that.  The thousands of hours of time taken to replicate human movement and performance for each show were stripped away and the little holographic girl felt a little less… human.

That was the intention behind the art show put on by artist Mari Matsutoya, music producer Laurel Halo, visual artist Darren Johnston, and many more who all collaborated to do something a little bit different.  They decided to deconstruct what being a virtual idol meant and shove it in the faces of the expectant crowd.  The exhibit takes away the peppy attitude, it gets rid of the realistic dancing, and it asks us what is left after we take her apart.  According to them, it seems what is left is an empty avatar, a tool.  A Vocaloid is a piece of software to make music, and the exhibit never wants us to forget that.  The whole performance was very self-aware.  The typically lifelike and expressive Miku was intentionally unnerving and robotic. Miku danced literally like a marionette (Hit that CC button), singing different verses about being a puppet to others wishes and an empty shell for others creative freedom, all done to the backing of a very cool mixture of experimental electronica mixed with R&B vibes.  There was even a moment in the performance where she sat down on a virtual stool and watched the screen behind her as her creator appeared and talked about her as a piece of software, directly made as a vessel for creativity.  Other visuals were very interesting like a virtual camera that came from behind Miku and stared out over the audience, the real character on display for this show, directly breaking the 4th wall to drive home the point of our necessary part in this formula that is Hatsune Miku. 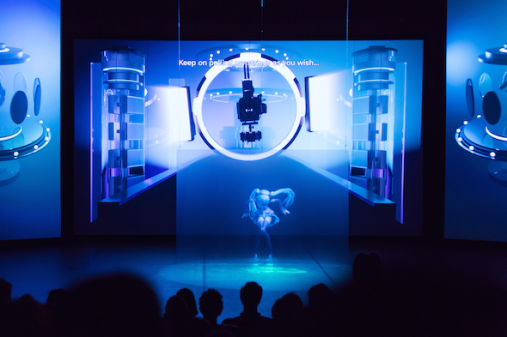 Hal 9000: “Dave, although you took very thorough precautions in the pod against my hearing you, I could see your lips move.  You like anime girls.”

From an outside perspective, the idea that Miku isn’t real seems obvious.  Hatsune Miku is a collection of software that can be purchased and used to create music or choreograph dance routines.  She isn’t some Jem and the Holograms or maybe Gorillaz where there’s very much a human behind the digital character.  Even Virtual Tupac was real at one point. Miku is different. She isn’t physically real nor does she have any sentience, so why should we view her as “alive”?

But it’s not that simple.  Miku is an international success, selling more releases than any artist in history and having worldwide concerts that attract thousands of fans every single show.  To a wide group of people internationally, her performances are just the same as going to a live concert for a human performer.  In fact, because most of her songs are created by those very same fans, there is even more stake in this “person” than, say, going to see Lady Gaga.  Imagine composing a song and then seeing it performed for you live on stage by your favorite artist.  To these people, she is very much alive and while no doubt everyone realizes her actual nature, there is a suspension of disbelief that is given to the situation.  Once the band begins to play and Miku takes the stage, she very much is her own person.  In this way, the fans through their songs and adoration give her life. And this is what this art show has targeted. 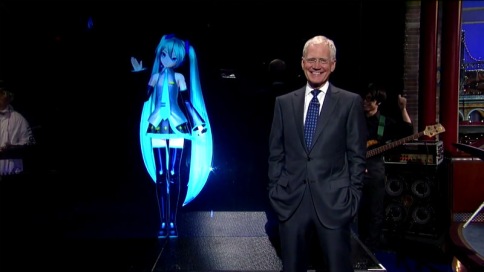 One of the few times Letterman wasn’t sure if he should try to shake hands.

For the people present in Berlin, many of whom were fans of Hatsune Miku, the experience was unnerving.  On the one hand, there were those that enjoyed the interesting twist of the event and the ideas that the artists were trying to get across.  There were also those that didn’t quite get it (which thankfully there was a Q&A after the performance to remedy this), and others that just didn’t like it, as it’s understandable to have a distaste for what may seem like sour treatment of their favorite character.  However, there were more who elicited the exact response the creators seemed to be going for:  Shock with a side of shaken faith, their suspension of disbelief having come crashing down.

The idea of the deconstruction of this pop idol isn’t about removing agency or stripping away and laying bare the girl herself.  That would be creepy (particularly if taken literally). Instead, the reason for this project is to point the finger at us: The creators and fans.  We are as much a part of this machine as she is.  She would not exist if there was no one to create her music and her legacy. Similarly, she would not be “alive” were it not for those who consume that legacy of music and performance.  Through her, we find entertainment and artistic expression, but none of this is done by her.  It’s done by us.  So what does that make Miku? 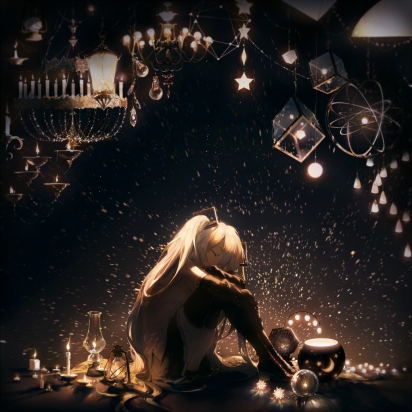 The exhibit creators seem to state that the answer is a hollow shell, an avatar to graft our own personas and ideas to.  Yes, she will always be a teenage girl with crazy anime hair, but in no way will she always behave or sing in the same way.  She’s the world’s first open(ish) source music idol, meaning literally anyone can make music with her, and any genre is available, even blues.  It’s all left up to us. 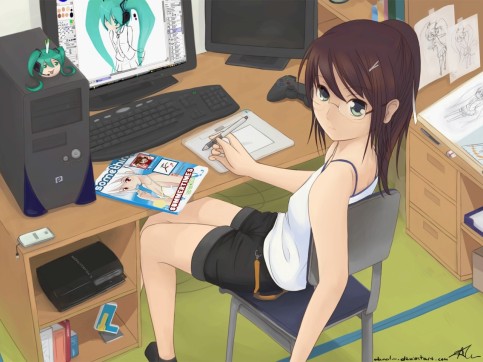 “Who are you?  Why are you in my house?  Also, why do I have an HP computer and not something better?”

This performance forces us to look at who we are, those who create and consume Vocaloid songs, and while the show was intended for Miku fans, it looks at even those that create and consume music at large. We, who want our pop stars and demand so much without viewing them at all as human beings.  Many stars have cracked under that pressure, an animalistic want or need for entertainment that consumes to the point of even hurting those who give us our fix.  This can easily be seen with the self-destruction and mental breakdowns that those who grew up on the limelight are prone to having.  Yes, popularity has its own poison that changes them, but we the fans create the concoction and give them the tools to heighten their own personal issues.

While Miku doesn’t have the ability for late night arrests or drunken binges, that’s kinda the point. In this exhibit, the creators are able to explore that idea of ravenous consumerism and the darker aspects of the music industry, but in a safe location with a performer who can take it.  This speaks especially to the fans of Hatsune Miku, who are more directly involved in her career and therefore feel more unnerved by her deconstruction.  The exhibit also seems to just point out the obvious, that as much as she may seem alive, Miku is still ones and zeros that can be used for both good and bad representation and entertainment.  The choice is with us.  Miku performs in a way that gets under our skin and speaks directly to the consumer in us that wants more.  It’s uncomfortable, but that’s intentional.  It wouldn’t be deconstruction if it wasn’t a little dark and the show plays on this, challenging our concepts and ideas of what is a pop star or idol. 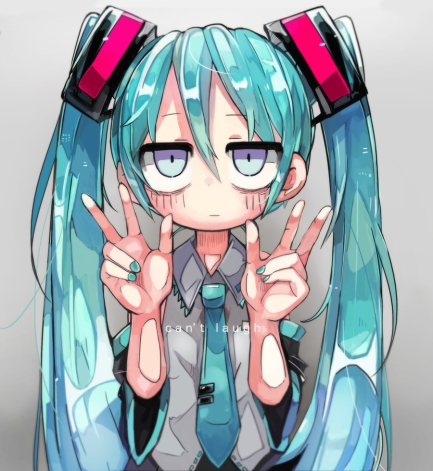 Clearly the darkest of dark characters.  – Art by Teracoot

Needless to say, the creators of the exhibit didn’t make many friends in performing this art piece. However, I personally found the idea fascinating.  Whether the show itself was actually successful remains to be seen as the full show is not available currently outside of the two separate exhibits they had, one in Berlin and one in London.  If we look at what the critics at the event thought, their feelings were mixed, though with a generally more positive vibe. However, regardless of some rating, I feel the ideas expressed and the notions challenged stand to be celebrated.  Hatsune Miku is an international success, a girl who has been able to do so much to change the perceptions and ideas of the music industry.  However, it’s not her own will that has done this.  It’s us, the fans and creators that bring her to life and share in the idea of a little blue girl with a pitch perfect voice.

For another type of Hasune Miku “Deconstruction”:

P.S. ESPN did not make Miku…

Inspiration and research for this topic:

The future of pop music? Hollow shells run by algorithms – and Hatsune Miku is leading the way:
– http://www.wired.co.uk/article/hatsune-mikus-still-be-here

4 thoughts on “The Deconstruction of an Idol”