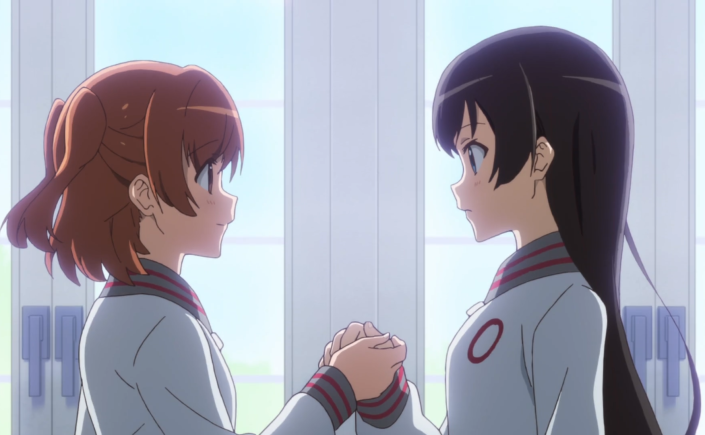 This was the exactly question asked in a Backloggers conversation a few weeks ago, and I have to say that this year is just moving along so fast. I’m not sure if it’s just a thing that’s happening for us here, if it’s just due to the major hits we’ve had this season, or if it’s just because there’s just so much content out there to keep us reading that we just lose track of the time. Despite whichever it may be, we’re here to share some of that monthly content with you guys, as we always do, even when we’re struggling to get our own content out. Anyway, I’ll end the preamble here and leave the blog announcements for later, so here’s some of that content we thought was just boppin’ this month!

For Those Who Remain Behind; The Third Wheel in Revue Starlight and Revolutionary Girl Utena – Isn’t It Electrifying? (@illegenes)

This is a pretty strong post to start with, but I’m so glad that I managed to find this and read this one, as Revue Starlight has definitely been the talk of the season. I still haven’t managed to fully catch up myself, but I absolutely love the connection and explanation that illegenes made to the characters in Revue Starlight and Revolutionary Girl Utena. The topic of friendships, love, romance, and the connections we make are all discussed in this post in absolute elegance.

The topic is amazing, and I think what really makes this post stand out to me is the writing clearly comes from someone that’s been in that position as well, making it an absolute strong piece about the topic at hand. It’s an excellent personal piece, but also remains analytical; absolutely worth a read if you’ve watched either of these shows or have been in a similar situation.

Yonkoma, the four cell manga – A Dash of Dorry (@Dorry_kun)

If you’ve listened to any of the Backloggers podcasts about slice-of-life shows or seasonal anime, you’re already bound to know my general opinion on the aformentioned “yonkoma” or “4-koma” style comics and manga. While I dislike the general format and formulaic aspects of these when translated to anime, I do find the conceptual idea of these when placed into manga and comics as reasonable entertaining at times.

Luckily, Dorry is here to break all of those aspects and origins down for us in this article! It’s a pretty brief, yet interesting read from a structural standpoint, even breaking down the functional aspect of what each panel is/was meant to do, and I think that’s pretty fascinating in its own regard. It’s something I’ll continue to look for in those sorts of formats as I watch/read more anime/manga. Thanks for that!

While this piece is a bit different from ones that I would typically enjoy, Chris from Peach’s Almanac uses this post to discuss the concepts of what the idea of “quality content” really means to someone, and how when we mention “quality content” what sort of ideals that can place upon ourselves and others. It’s a piece of self-discovery in many ways, but in others, it could also be a piece of meta-commentary on how we as a community may place too much of an emphasis on “quality content”, something that I’ve thought about lately as well. Sometimes this idea can bar us from writing more, or pushing out articles that might be good enough, but cause us to second guess ourselves due to not meeting that acceptable “quality” standard, whether that’s to ourselves or the community.

It’s something to think about, as it’s crossed my mind plenty as I’ve gotten too busy to find myself the time to write “quality content” that I would find suitable to my standards. It’s a good post to digest if you’re having troubles writing or meeting that “quality” standard. I’m glad that personal posts like these are still written, even if it was originally just meant to sort out the original poster’s feelings on said topic, as that’s an important part of the writing process too. It’s personally a topic that I needed to read most on right now, so thanks for that Chris!

I think anyone who has seen Puella Madoka Magica and then the follow-up Rebellion Story movie knows exactly what happens when a dark magical girl story kinda misses the point of magical girls in the first place.  Latonya does an amazing deep dive into the issues with being dark for the sake of dark and what good stories with dark magical girls do instead, using this archetype to flesh out the story and overall ideas behind the magical girl genre.  Namely, hope for more diverse young girls and women. Definitely give it a read!

Country Roads, Take Me to Hell: The Spooky Small Town, the “Returning Home” Plot, and the Coming-of-Age Story – The Afictionado (@TheAfictionado)

Honestly, the name was enough for me to click on this one but after going through the game Oxenfree myself, I’ve also become obsessed not just with the settings of small towns, but how those settings can be used to do some really interesting storytelling.  The Afictionado goes into detail about how particularly spooky, small towns can be used for inventive ways of discussing the feelings of something “unfamiliar” about our hometowns, that feeling of uncanniness we experience when things just don’t feel the same anymore as we mature out of our innocent, carefree days.  This one is fantastic.

The Fantastic Freedom of the Aimless Blog – Irina (@idrinknwatchani)

Recently, Irina from I Drink and Watch Anime celebrated an anniversary for her blog (congrats, yo!) and along with some fun words about the adventure getting there, she also had some very good advice for anyone on here on how to enjoy yourself while you create.  It’s fantastic advice with a positive outlook for avoiding burnout or just keeping up the energy for writing and trying different things. Definitely check it out, as it helped me immensely to hear it. (And p.s., I am totally down for that drinking watch party, juice or anything else. :D)

Being a bit of an academics nerd – more recently, being a full-time instructor in higher education – and wanting to help those looking to publish in an academic journal, it should come as no surprise that I’m once again plugging a post from Anime and Manga Studies. Mikhail’s posts often include calls for papers from different journals and institutions related to anime and manga studies, and in part, this post is no different, highlighting an opportunity to publish in the journal New Voices in Japanese Studies. But beyond this call for papers, Mikhail’s piece also offers some helpful ways to focus your efforts in trying to find a journal to publish in; highlighting aspects such as pushing less for anime publications specifically (as those are in short, if not non-existent, supply), and more for journals where your particular piece would fit thematically. It’s a great read if you’re at all interested in pursuing anime and manga studies as an academic interest.

The Value Of Rewatches – Karandi (@100wordanime)

I recently found myself in a conversation about rewatching a few series that I haven’t seen in quite some time; some series I have watched to death, such as Psycho-Pass, some I have watched criminally few times, a la Cowboy Bebop, and numerous others that fall in the middle of the spectrum. Karandi’s piece came at a convenient time, really, and it made me consider some other reasons why one might re-watch certain works. Coming from someone who has pretty exclusively re-watched shows just because they’re a favorite of mine, putting the re-watch into perspective this way was a solid way to consider the concept of the re-watch, which I can’t honestly say that I do much of. The four particular reasons Karandi mention give some solid food for thought, and it’s well-worth going over if you’ve been thinking at all about a re-watch recently.

In another piece I’ve chosen that’s a bit more meta than pertaining directly to seasonal anime itself, Prattle has put together a fascinating post about their blog’s method for seasonal anime selection. If phrases like “text analytics or computational linguistics” or “social listening software” gets you going, then this piece is right up your alley. The thought of selecting anime to cover based on computational data that goes beyond ratings and statistics is absolutely enthralling to me, and it makes for an interesting read, even if you might not put quite as much stock in hard data such as this.

As always, thanks for checking in with us and our monthly picks this time around! If you think there’s just something super cool that you gotta share with us, then please do so through any of the available means possible (Twitter, comment section, e-mail, whatever). We’re always looking for blogs to follow about any sort of media topics, so feel free to share whatever you may find, even if it’s a cool piece that you wrote that may have gotten overlooked! We’ll gladly give it a read!

We appreciate all of those content creators out there and the work you put into creating what you create! Thank you!

As for some brief announcements on our part, we did mention last content round-up if there were any status updates on the… sort of barren landscape of our blog the past month. We’re still going to be producing content, but consider this season as a break for us (and no, this won’t be one of those “forever breaks” either).

Everyone’s work schedules have taken turns for the busier lately so we’re going to be working on developing a plan to give more consistent content. Nothing will be cut from future seasons that we were doing prior to this, so there will be no reduction in content, but there will be a change in structure.

The 3D Kanojo posts may or may not be completed, we have yet to determine what the outcome on these will be, but we’ll tweet about it on @the_backloggers when we find out.

We’re just in the midst of sorting things out, and we sincerely apologize for the lack of content and updates. This is something we’re going to work on in the future as well, and we’re going to be really trying to fix this in the month of September. We hope that you continue to support us and our content as we continue posting about this (and other things, of course) throughout the month, and thank you for understanding!