Continuing with 12 Days of Anime, today’s post features a work that’s nowhere near the quality of A Silent Voice, but still has its own piece to say about the changes we undergo in our lives. Masamune-kun no Revenge is probably not what most people would consider a good show, and while I will argue that some aspects of the show aren’t the most original or well-portrayed in the genre, the show has a lot of cleverness to how it plays itself out.

Rather, having a romance story completely centered around the idea of “getting revenge” is ridiculous in its own way. Although when you begin examining the work in a more meta context and how it’s dynamic works in terms of being a romance story centered around “getting revenge” instead of “finding love”, yet still having it turn into a romance story by using revenge as a vehicle for that romance, becomes pretty absurd in its own right. This type of story does have its own pitfalls, but looking past those can reveal some refreshing takes on the genre itself just by taking some stock character traits and using them in a particular way.

Probably one of the main aspects that’s fascinating is how the characters use facades in order to try and accomplish their own goals, whether that be getting revenge on someone or finding their lost childhood “friend”. While I wouldn’t necessarily put it on the levels of a show like OreGairu S2 in terms of how many levels deep the masks these characters wear end up becoming, the utter messes that are created by our main cast make it far more entertaining than your standard romantic-comedy involving drama and misunderstandings.

It’d be one thing if the characters were just being themselves and all these strange misconceptions happened, but the show uses these facades to give characters like Aki and Masamune more depth than a simple “I hated X, but now I like them after Y amount of time passes and Z amount of drama happens”, as other romance shows tend to learn towards doing.

Early on in the show, you can see how these masks are going to play an important role, simply from some of the more detailed moments of the show. Masamune’s personality of being “the cool guy” is played up so much in the first few episodes that it’s pretty much a given that it’s a major factor within the show. However, one of the first moments we get to see an actual facade affect someone’s feelings in the show is during the “confession” between Masamune and Tae Futaba, where Masamune ends up rejecting Tae in order to begin enacting his “revenge plot” on Aki. Instead of a more traditional approach of building up Tae’s character, allowing the “confession” to happen, and then letting it crumble, this was a relatively short segue from the story itself in that it happened and Tae ends up just mostly hiding the pain that this causes for her. This may seem like a small decision that really plays no part in the actual show or the manga (as far as I’ve read anyway), but really it’s just setting the stage for the types of behavior we should expect from the characters and the narrative itself, using characters that obviously mask their real feelings behind masks and facades that they’ve placed upon themselves to deal with their own issues in an indirect way.

For example, there are several instances where if Masamune was just himself, Aki would be able to figure out his true identity, which would allow Masamune to enact the revenge on Aki that he desires so much. That’s not how the show decides to play itself out though, as Masamune continues to act like a tough, cool guy and Aki instead just brushes him off as arrogant and annoying. Masamune thinks playing this cool character may be able to assist in his goals, while in reality its his main downfall. He uses these masks in an attempt to accomplish a goal, yet as the series progresses, he slowly become more aware of how harmful his persona is in regards to his own goal, and becomes more aware of the real problems of having a facade hide his true self and feelings.

I think probably though one of the strongest examples of this sort of internal conflict is Neko, one of the more complex characters within the entire show. There’s all sorts of ins and outs as to what her real intentions and goals are, and her methods are definitely cunning in their own way, using the facades of the other characters to her advantage when necessary. Any time Masamune is forced to interact with her, many questions arise in his own methods, wondering if his facade is really the right way to do things or if it’s even fooling anyone besides himself.

This becomes a main topic of discussion during episode 8 as well, with Masamune wondering if acting the way he acts in front of others is even worth anything. Of course, this mentality also fights his own complex about his weight and why he underwent this persona change as it was, which adds even another layer of complexity to the mix. This also ends up backfiring on Neko as well though, dealing with similar personal issues because of the painful facade she placed upon herself, showing the true dangers of being unable to live up to what may be expected of your masked self.

But one thing remains consistent with all of these characters using these “masks” to shield their feelings from others; they’re all preventing the execution of their own goals, and that’s what makes this entire show fascinating to unfold.

Even though everyone is playing the exact role they need to playing, all of them are rendering themselves ineffective in terms of accomplishing those goals, which brings up the interesting topic of “can you really live a facade if you don’t fully believe in it yourself?”. It’d be one thing to say that “wearing these different masks is utterly ineffective” or “if you play the role well enough, you’ll get the part” (metaphorically at least)”, but are you really able to fool yourself into thinking that your life will suddenly become better and problems will disappear solely because you act like you’re a changed person?

They say “actions speak louder than words”, but sometimes the heart speaks louder than both. Some things just can’t be overcome with sheer willpower. While you may be able to change your physical identity, your mentality remains the same unless you actively attempt to overcome that.

It’s something which many characters in this show struggle with themselves. Take Neko, for instance, she struggled with her persona so much that she placed herself in danger to be able to cope with it mentally. Masamune isn’t much different, as it’s not uncommon for him to suffer a full-on crisis because of the trauma he suffered from as a kid. It’s not easy to mentally overcome these things, even if you do everything you can to change yourself in every other way; something which Masamune-kun no Revenge as a story nails pretty well.

Changing yourself is more than physical, you must have the mindset to be able to make those changes happen as well. That’s the real challenge. It becomes more than just a situation of “thinking you’ve changed” and becomes more of a question of “has this really changed me?”. Ultimately, all of the characters within this show have yet to completely realize this, and perhaps that’s why the situation of these characters remains as it is. I wouldn’t doubt that no actual progress can be made in these stories until the characters figure out that their facades are exactly that, facades, and that the facade doesn’t help deal with the root of the issues they’re facing.

It seems such as a simple situation to resolve, but this can happen so easily in real life as well. Everyday, people have different masks for different aspects of their life, and when you’re trying to overcome a shortcoming that you have, it can become even more difficult to do so.

As a personal anecdote, this is something I tried during high school in order to become a more outgoing person, but just putting on a mask wasn’t enough to do so; it took several years of mindset changes alongside the mask in order to finally get to a level that was tolerable for myself. I’m sure I’m not alone in this sort of situation, as there’s plenty of situations that call for masks of some sort and not everyone has the same level of strengths for particular tasks, and strength to overcome those shortcomings isn’t built overnight. 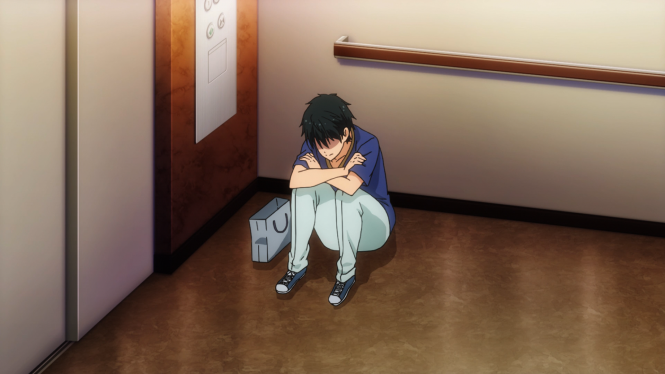 It’s easy to say to make a change, harder to put on the act of making the change, but it’s most difficult to fully change your way of thinking. Not to mention that you can only keep on the mask for so long before you reveal your true self unless active changes are made in how you mentally perceive yourself. True colors always bleed through the paper eventually, after all.

That’s not to say that facades and masking yourself can be all bad either, and I think that’s something that Masamune-kun no Revenge also comments on through this. There’s nothing inherently wrong about these characters having these facades, which is likely one of the reasons they as close to each other as they are. These sorts of false personas can help facilitate change. It can be mentally challenging to overcome certain aspects of yourself without either motivating yourself to pursue an active change, or using a sort of facade to kick-start this type of mindset, if the person realizes and desires that for themselves. This is likely something that the characters will have to deal with later on in the story, if this is the sort of idea the author is aiming for, that is.

No matter the story’s ultimate outcome, using it to reflect on how someone’s perception of themselves can affect their actions, for better or for worse, has been an enjoyable, chaotic ride, and I encourage those that want to make changes for themselves to continue pushing towards those changes.

3 thoughts on “12 Days of Anime 2017 [Day 2]: Masamune-kun no Revenge – How Our Identity Can Affect Personal Motivations”