A brief note – I have gone into this show completely blind. I have not even read a summary of the show’s main plot. Everything I relate in this post should be taken as such.

This Spring anime season, there’s a surprising number of shows that at least look pretty promising – though as we all probably know by this point, there are a lot of series that look and seem fantastic from their PVs, which show off cool animation sequences, try to entice you with their (hopefully) endearing characters, attempt to seem like they could bring something new to the table, or some combination of the above. There’s a lot to wade through, so let me pitch a show to you for this season. It’s a LN adaptation set in a fantasy world with- hey wait, stop, I’m not done yet! Let me finish!

For those who may not know and need a strongly-paraphrased summation of the show’s premise, Shuumatsu Nani Shitemasu ka? Isogashii desu ka? Sukutte Moratte Ii desu ka?, or as the anime community at large has mercifully deemed it, SukaSuka, is a fantasy/sci-fi Light Novel adaptation taking place in a world of sky islands, where humanity was wiped from existence. In this story, we follow young Willem Kmetsch, who has taken on the job of being a military caretaker for a warehouse of advanced weaponry. What he doesn’t know, however, is that the weapons are, in fact, young girls. While the show might sound on the surface to be a groan-fest of typical fantasy isekai trappings and other tropes that tend to make shows less-than-enjoyable experiences, SukaSuka actually delivers in its first episode a surprising amount of good reasons to give it a chance – and by god, do I have high hopes for this one.

In the pilot post for the last series we covered, Youjo Senki, Owningmatt93 talked at length about how shows distribute information about their world, story, etc. to an audience, and how crucial it is for a show to nail that as early on as possible. Youjo Senki, as many other shows have, suffered from an astoundingly “meh”-worthy first episode, largely because of the heaps of expository dialogue and bona-fide infodumps that it tossed onto the viewers, and because even after those shallow attempts at worldbuilding and development, it was difficult to come out of that first episode knowing much of anything about the show that was of any real worth. We had some nebulous idea about the Fatherland and the surrounding nations, and we knew that Tanya was a bad person. Evil, if you will. We already knew that. SukaSuka, on the other hand, avoids these pitfalls, and gives the viewer a reasonable amount of information to go off of for our first dip into the world of the show.

Like, it has neon signs powered by crystals. Crystals!

So far, SukaSuka’s dispersal of world-building information comes in the form of what seems to be key concepts in a slow trickle, as opposed to a great deal of extraneous details in one flood after the other. Judging by the first scene, an airship-based battle interspersed with bloodied young men and women, guns, and magic which one can gather is most likely a flash-forward, and from the title (which is, roughly, WorldEnd: What do you do at the end of the world? Are you busy? Will you save us?), we can presume that some decidedly rough things are going to go down in this show. We don’t see any of that come to fruition in this first episode, but we’re at least given an indication that something’s brewing. Store that away and save it for later. 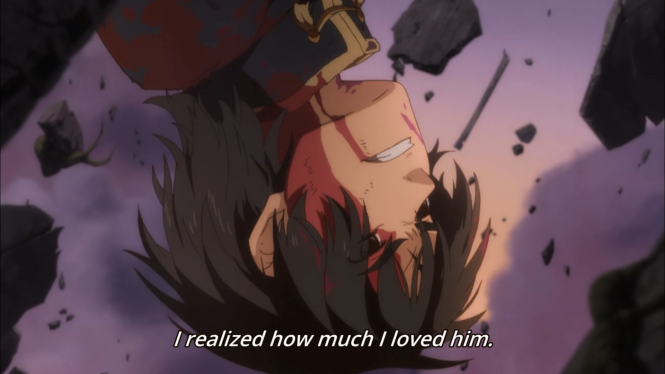 Hon, loving a guy that’s bloodied, battered, and falling through the sky like debris sounds like a pretty bad starting point.

We also learn a few other important details about the show in this episode. One of the more interesting facts is that, in certain locales, there is a pretty pervasive sentiment that any people who are not scaly, furry, or otherwise bestial in appearance (pretty much anyone who looks vaguely like a basic human) are referred to as “disfeatured,” and are seen as social outcasts, for some yet-unexplained reason. Also very pertinent and mysterious is that Willem is quite a bit older than he seems – by the count of the episode’s last scene, at least 526 years older. And for the purposes of worldbuilding, the end of the episode gives us a brief glimpse at what appears to be one of the most important points in the show so far – we see Willem the night before he goes off to some fateful battle, conversing with a young girl that calls him “Pops,” only for us to be told by a narrator that “within a year of that night, humanity was wiped out.” We aren’t yet told how humanity was wiped out, what the battle was over, the identity of the girls Willem was with, why Willem was involved in the battle, or why, 526 years later, he is still alive and kicking. Beyond that, the show leaves some important nuggets of information completely unstated. Where does this show take place? Does this world have a name? Do we have any major continents, or nations, or cities that we need to know about? Any larger ruling powers? What more do we know about these medieval-style cities with airships flitting about them?

No idea. The show has yet to really give any explicit, concrete information.

How did they get the licensing for Not Pac-Man™?

All of these concepts, as one might imagine, seem to be pretty darn important points for this show. However, I think that it is fine that we don’t have the answers to them yet. What this first episode did was give SukaSuka a world that is ripe to be discovered in subsequent episodes, as opposed to having many of these questions answered in an infodump-ish manner. Had we been given an overview of the world by some nebulous narrator giving us the “this is the world, this is a very important nation, these are the races and peoples at play, this is why they hate each other,” etcetera etcetera etcetera, my eyes would have rolled so far back in my skull that I would be having a staring contest with my gray matter. In not dedicating a ton of time to some boring expository sections, SukaSuka has done a few things. One, it has indicated that the show trusts that its audience can be patient, and that they can actually wait for information to be given out about the show and its world. It is not necessary for a show to have all of its major information given out in the first episode; in many cases, doing so makes for a communication of information that is often garbled, confusing, and all-around not helpful. Instead, by leaving so many of these core ideas open, it gives the audience space to think about the show, and to later on be given these answers in a more natural progression of information and events.

Hopefully, this is an acknowledgment of nonsensical killing off of characters, and not foreshadowing of many ridiculous deaths to come.

Secondly, SukaSuka’s lack of excessive exposition has given its first episode a lot of time to develop its characters. I’m a pretty firm believer that no matter how solid or well-developed your world is, if you have some garbage, poorly-developed characters, then your amazing setting is going to amount to diddly. The way that the episode was paced, we were introduced to a reasonable amount of central characters, and it was done so in a way that has given us a pretty good (or at least not garbage) sense of who these characters are. We have enough information about Willem, Chtholly, Nygglatho, and the four other little squirts that are in the care of Willem to actually have some characters that we care about enough to hold on for the second episode. 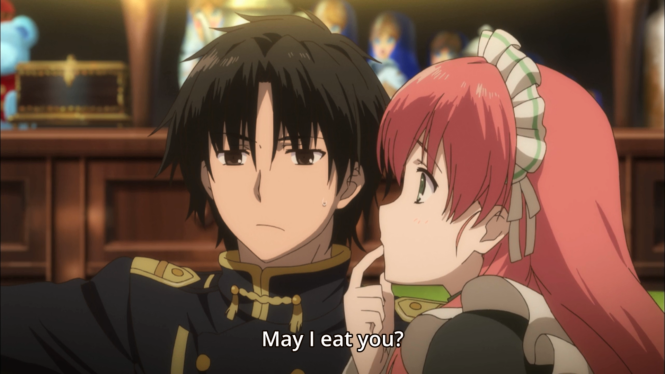 What bits of the world SukaSuka has shown us so far are fascinating, from the mix of seeming high fantasy and technology to the warm characterizations of our main cast, and it has honestly not left me leaving its first episode thinking “this is definitely a fantasy Light Novel adaptation.” I am genuinely curious about many of the mysteries that the show has posed to us, and for the time being, and am more than willing to let the show take its time and unfurl them before me. As I stated earlier, I have high hopes for this show, and from what we’ve seen thus far, I do not think that those hopes are misplaced. If nothing else, get hype for intense fight scenes.