When I sat down to watch Princess Principal, I couldn’t tell you what I thought it would be, but damn if I wasn’t surprised.  I guess I expected some kind of “cute girls doing edgy spy things” and, to some extent, that’s sort of the zoomed out view of things.  However, it’s so much more.  As The Afictionado put it when we were talking on Twitter earlier, this show is more of “a steampunk fantasy full of spy intrigue and reminiscent of Baccano!”

Take a steampunk setting in turn of the century London, split London with the idea of post-WWII Berlin (including the wall), add in a helping of fun pseudo-science, pour in a cast of charming characters, and then top the whole thing off with a great soundtrack and you’ve got yourself what I’m watching this season.  This dish was delish, and if this rest of the series is anything like the first episode, then I’ll be craving more and more over the next few weeks.

So, to get this out of the way, our cast of characters are girls who currently all go to a prestigious school for nobles and higher class, though not all of them seem to come from that background.  Set in an alternate version of London, the school hosts a few spies for the government on one side of the London Wall, a wall that separates the “Kingdom of Albion” and the “Commonwealth of Albion”, a division not just in physical location but also in ideology, if the communist-esque banners in the quick expository intro were any indication.  The cast work as one of two (so far) groups of spies employed for various missions.  Using the school as a home base, the girls are given various missions that see them heading to the other side of the wall for reconnaissance, assassinations, rescuing defectors, and whatever else needs done.

What I’ve enjoyed so far, is that with so much going on, the show gives us the info only when we need it, never getting too lost in details and forgetting the plot.  Because of this, aside from a relatively quick front load of exposition, all the other information is given out about as often as the girls get it, purely on a need to know basis. This assists the pacing but also matches the tone of the show, in that we’re purposefully left out of the loop to enhance the tension and uncertainty of everything that’s being shown.  We never really know if we’re following the good guys or even what are the true motives of the powers that be.  While we’re clearly meant to empathize with the main cast, because of a lack of information and the inherently deceitfulness of the characters, we really don’t know a damn thing.  Even when we’re given a small clue as to the backstory of Ange, by the end of the episode, we’re second guessing this as well.

Except this guy.  Everyone clearly knows what’s up with this guy: 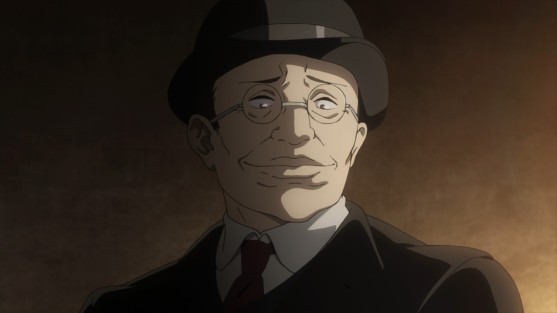 Glad to see the bad guy from Raiders of the Lost Ark got work after the film.

This fits right into what appears to be the theme of the first episode:  Lying.  All the discussion on lying, I felt, was done very interestingly.  Of course, it’s normal for spies to lie.  However, it’s not just on the job that we see the crew showing their forked tongues. The cast at one point discuss how their relationships to each other are built on lies, noting with humor that it’s technically normal as even parents lie to their children.  The defector even has a few lies of his own, and we see the big four in charge of operations intentionally keeping information from one of their members until an operation concludes.  However, more interesting than that is Ange, the character we spend the most time with this episode, is shown to compulsively lie, to the point where the princess even comments that she may not even know that she’s doing it.  Not entirely, anyways. This creates a powerful moment at the end that showed perfectly the darker actions and tone this show seems planning to go for. 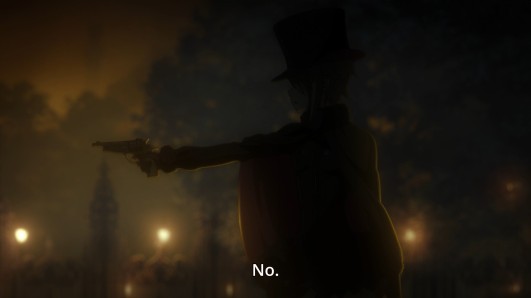 This was such a beautiful moment.  This is what hooked me.

All of this adds up to a great first episode that gives just enough information and pizazz between its writing, action, setting, and music to draw me in.  I’m very interested to see where this goes, especially because this is all anime original, meaning this show is breaking new ground, in a sense.  However, this isn’t the first rodeo for the crew behind this show.  (Shoutout to Owningmatt for researching and letting me know!)  While Studio 3Hz doesn’t have a lot of titles to their name, Flip Flappers being the only one of the four they’ve done that I’ve seen, the actual people in charge of this have a long list of credentials and experience to pull from.  To name a few, we’ve got the original creator of Code Geass and script-writer for Planetes and several others.  The director has worked on Stand Alone Complex, Barakamon, and assisted in Evangelion 1.0.  We’ve also got the original character designer from Kino no Tabi and onboard is the sound director from Psycho-Pass, Sword Art Online, Baccano!, and hundreds more.  Lastly, among several other established people, we also have composer Yuki Kajiura, a woman who fittingly grew up in West Berlin, whose credits are in the hundreds, doing music for the Fate/Stay series, ERASED, Sword Art Online, Madoka Magica, and even that beautiful ending song for freaking Baccano!

This is a good crew holding the reins on an anime original series, which has me super excited to see what all they come up with for this series.  That said, it’s only the first episode so could it be bad?  Sure.  And I think the intentional lack of information could definitely be a double-edged sword if it turns out that way, hooking us in but failing to give sustenance past the first episode.  However, more than last season’s pick for our site, I think we’re showing a lot more promise on this one, both in what was actually shown and who’s behind it all.

Y’all better not be cluing me into something about yourselves, Studio 3Hz…

Between the setting, the writing, and some really damn good art and animation, I think I can easily say I’m so excited to be watching Princess Principal this season.  Yes, it could be said this show is cute girls doing spy things, but in my opinion, it’s layered on by a fascinating setting and some damn good writing so far, refraining from going too cutesy and instead showing some of the harsh life of spies.  Plus the music and art are so good.  I’m super stoked for what’s in store.  No lie.