(After publishing edit:  After reading, be sure to check out the comments below as there are some corrections about characters’ ages that should be considered.)

Well, with an intro as damn good as that last episode was, I dove into this episode head first, ready to devour any and all that it could give me.  I just couldn’t stop drooling over that teaser for the end of the series that had my jaw drop back in episode one.  The show is definitely still keeping its tone and wonderfully paced story and as things slowly unravel about this world, I’m enjoying the characters more and more.

Picking up right were the last episode left off, our main character, Willem, ponders how these children could be weapons as he begins to acclimate to his new job.  Not an easy thing to do when all the kids are scared of you as the new adult in town but luckily, as has been hinted at before, our protagonist has worked with kids before and knows a thing or two about winning them over.  i. e. The fastest way to a child’s heart is through their stomach.

I know he won me over with his Giga Pudding.

There’s a decent amount of time spent in this first half showcasing Willem working with the kids and watching over them, very quickly adopting the role as their guardian.  Meanwhile, the teenagers are together making fun of Ctholly because she seems to be crushing hard on Willem.  All light-hearted antics and fun so far, though hints have continuously been dropped that there’s more than meets the eye when it comes to these girls.  While no single kid really sticks out besides the three teenagers, the group as a whole feels very much like an adopted family, all very cute and happy.  So it’s all the more dramatic when this suddenly and twistedly changes in a single moment. 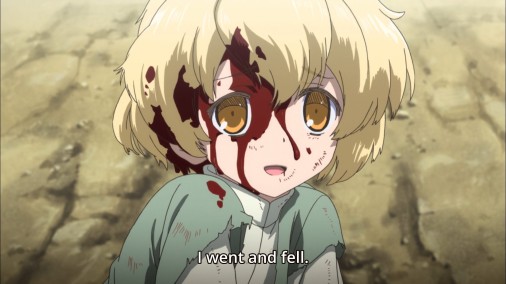 The suicidal lack of disregard the children show for their own safety makes for an incredibly unsettling twist and causes Willem to demand an explanation from Nygglatho. It’s explained that the girls are leprechauns, fairies that have mimic humans, allowing them to use human weapons that were used against the “seventeen beasts” that wiped out all of the surface world, leaving only those species alive on the floating islands.  Since humans (Emnetwihts, as the show calls them but I definitely will not for obvious reasons) lived on the surface, this means they were completely wiped out while other species survived.  The leprechaun girls are being made specifically to have no fear for their own life, expendable troops to fight off the attacks made by the seventeen beast against the floating isles.

This midsection of this episode becomes a bit of an info dump.  However, we’re still not given everything and the information we receive is small in comparison to other shows, only lasting a couple of minutes before going right back into more character-driven plot.  This segment also flows very naturally between what happened, the explanation, and then back into further story development.  Rather than two characters dropping everything to explain the history of the world, the scene feels like a normal conversation.  It doesn’t last long nor does it really explain everything, just what was necessary to get the ball rolling.

In this way, this chunk of world-building is mildly expository rather than an giant information suppository.  We still don’t know a lot about Willem’s past or why this whole military program was started for the girls, or even who’s behind it.  The show is giving us the information we need by spoonfuls rather than having us down the whole gallon jug. I appreciate that the anime is keeping the mystery building and focusing on the characters, especially given how weirdly rare that can be from light novel adaptations.

When it’s going up against names like Insania and Ignareo, I feel bad that Percival got the short-end of the “Bad-ass Sword Names” stick.

Following this, Willem is obviously disturbed by the information at hand, particularly since he’s shown to know the history of these special human weapons used against the seventeen beasts.  Afterwards, Willem finds out that Ctholly and Ithea “went out” and are not heard from for several days.  When we finally see them again, they are both badly damaged, Ctholly is even passed out after what only can be assumed was a fierce battle with the spawn of the seventeen beasts.  Willem walks them home and discusses the leprechauns’ situation with Ithea, who comments at how disgusted she is being forced to use a human weapon. Willem takes offense but covers this up, still hiding his actual race from the girls.  Ithea jokes around to ease the situation while they walk the rest of the way home.

I have a place in my heart reserved for snarky, fourth wall-breaking characters like her. :3

Once home, Ctholly wakes to find Willem had been watching over her in the infirmary, making sure she’s safe and overall not helping her massive crush.  With the cat out of the bag about her and the other children, Ctholly asks to have one final request from Willem as she will die on her next mission in five days, explaining that attacks from the spores, or the expelled parts of the seventeen beats can be tracked.  Ctholly will channel all of her power in order to destroy the beast at the cost of her own life.  She asks for a kiss before she goes but Willem refuses and ignores her request, treating her like a kid and still talking to her as if she won’t die. Angry, she pushes him away when he tries to help her and asks her to lay on her stomach.

Honey, there are several laws against this very specific thing.  I can’t imagine it’s that different in your world either.

In order to get her to cooperate, Willem gives her a kiss on the forehead before flopping her over and massaging her back to “get rid of the poison the blade has left in her from its use.”  Finally, with her all tired out, we receive one more end of episode flashback to show two people who seem to be the original owners of Ctholly and Ithea’s swords, who Willem knew well.

And here is where we begin to really drill down on something that makes me very hesitant for where this show may go:  The relationship between Ctholly and Willem.  Willem is a full-grown adult well over Ctholly’s fifteen years. (He’s also pretty much well over everyone’s age, being 500+ years old.)  While it is normal for teenagers to have a crush or two while growing up, the emphasis this show has had on this relationship makes me nervous about what exactly it’s trying to do.

So far throughout the show, Willem has been nothing but respectful and a proper guardian, even understanding that Ctholly has feelings for him but never giving her a hint to act upon them.  However, while he doesn’t seem to be acting on any sexual urges, the camera sure as hell is.  Given that she’s only fifteen years old, at least a little care should be taken not to paint this as a relationship between an adult and a minor.  Crushes from younger people can happen, as I’m sure many can admit to thinking one of their teachers growing up were attractive, but these relationships shouldn’t be acted on nor should they be celebrated or accentuated.  This scene and a few others in this episode seem to be doing just this and it makes me apprehensive.  Once again, Willem shows absolutely no interest in the girls from a romantic or sexual perspective but damn if the show isn’t doing its best to make things awkward with the way the director has set up these shots and the actual focus of the scene, particularly here are the end with Ctholly squirming half naked on a bed from a massage. 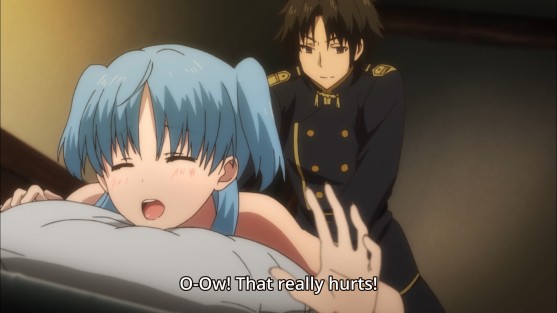 An argument could be made that this is to more avidly show the awkwardness and confusing feelings Ctholly may be going through but at the same time, should that be the focus of the scene when a minor is involved?  It’s pervasive throughout this episode as well, especially egged on by Ithea who loves to tease about it.  However, teasing is one thing, and even a crush for someone older can happen.  So I can accept that in the story, but depending on how much they try to push this one-sided love as a form of legitimate romance, I’m nervous about what may happen next.  That said, none of that really detracted from how much I’ve enjoyed these two episodes.

Outside of this one personal issue I have, the anime is hitting all the right points for me.  Within two episodes, we’ve managed to get a significant amount of very natural world-building as well as we’ve better fleshed out the characters and their relationships.  On top of this, we’re starting to see those darker elements to the story at play that were hinted at previously, slowly unwrapping them as we delve deeper.  Between Willem’s past and the messed up use of little girls raised to fight and die, this show is balancing this very interesting feel of a darker story with much lighter and hopeful moments.  Plus sweet freaking goodness, that soundtrack is so good.  I could listen to that fiddle and classic folk singing all damn day.  The show also does such a good job of interweaving this music into its very pretty scenes so that the whole tone of this show has such a beautiful atmosphere to it.

Overall, the promise episode one showed is very much continuing through episode two. While the OP seems to show that we will be getting to the battles and action in the future, I very much am enjoying that these have yet to show up.  In fact, most of the anime so far has been around what happens in the down time between the fighting for these girls.  Rather than taking an action-packed approach, the series is purposefully pacing itself to allow us more time to care for the characters we have and get to know them better.  The continuation of episode one’s character-driven story is such a nice thing to see here in episode two and I hope this continues onward.  The well-paced and developed series so far makes me feel like that teaser for the finale at the beginning of the show will be such an amazing and emotional climax when we get to it.  I am very giddy to see what happens next.

Enjoy another song before you go!