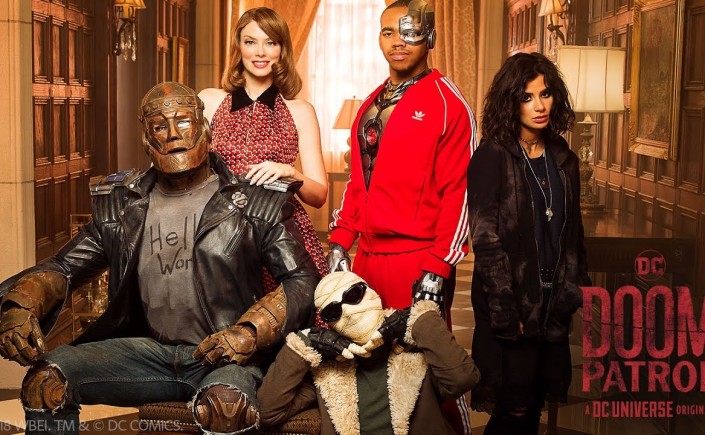 It’s been a bit but I wanted to make a piece.  Partially because of the extreme guilt of not being vocal and sharing with you guys who have supported us but also because I’m trying to turn that guilt into something really beautiful, if I can. So, I’ll do what I do best:

DC recently decided to wall off a lot of their content on their own streaming platform called DC Universe, possibly because they saw Disney do the same with Marvel.  Now, granted, I’m sure that there are some benefits for doing this. For instance, with a branch specifically for assisting shows to get created, there are some things that may not have had the money or chance otherwise.  That said, it really sucks for a lot of people because there’s no reason to pay for another service that you’ll probably check out once every blue moon.

Well let me tell you about how freaking blue that moon is for me right now.

I have a massive love for series that try something weird.  My favorite superheroes when I was very little were less the Batmans and Supermans of the world and more of the Freakazoids, The Ticks, and The Masks of the world.  Don’t get me wrong, I love a well told serious story but what spoke to me the most were those properties that were based on the bizarre.

In DC’s history, they have definitely allowed for the absolute bizarre.  This is super easy to see if you catch any of the DC’s Young Animal line of comics that they’ve put out specifically targeting the Young Adult to Adult age groups and in collaboration with Gerard Way of My Chemical Romance fame and now the highly celebrated adaptation of his comic series The Umbrella Academy.

Holy hot shit, did Gerard dig deep.  Young Animal has decided to revisit in brand new ways multiple comics from DC’s century old library and center them in the modern age.  Comics such as Shade, the Changeling Girl, Cave Carson has a Cybernetic Eye, and Doom Patrol were long forgotten gems that have new names and new protagonists with all new style.  And adding onto that are amazing new series like Mother Panic and Far Sector, created by one of the great writers of our time N.K. Jemison.  Young Animal is incredible. Every single one of these series deserves a post onto its own.  Sadly, I don’t have time for that but suffice to say each one of the beautiful creations given to us from gods follows a few rules:

1.) Pull from what made the old and bizarre DC comics work.

2.) Handle and discuss mature themes with both humor and very real openness.

3.) And be the fucking weirdest you can possibly be.

So let’s talk about that.  And because we’re short on space and I’m mostly just building to the TV show, let’s stick with Doom Patrol.

Doom Patrol is a comic that follows the conventions of a group of superheroes banding together to be a family for each other and fight some bad guys.  Well, okay, I guess they’re not superheroes and more just a bunch of accidentally empowered people. And, okay, they’re not much of a family since they usually kinda hate each other.  Oh, right, and I guess it gets a bit awkward when you realize that a lot of them were originally kinda sorta maybe forced into it?

But let’s not dwell on the Mr. Negatives.  This is a gush piece so… Doom Patrol!

The comic is basically an experiment in the avant garde and it’s new iteration is no different, with an explosive first chapter that includes brains in robots, a world inside a gyro, a sentient street, and even a race of aliens that are really just figments of the imagination.  And this is why I enjoy this series. Doom Patrol has always been an exploration of the weird and bizarre.  It’s a group of oddballs that end up saving the world from fever dreams that never should have existed, a mixture of Lovecraftian existential dread if the dread looked like puking unicorns and rainbow hellfire.

And that is the best way to start talking about this TV show.  My gosh, it’s weird. And I mean that in the best of ways.

The fact of the matter is each of the people on the Doom Patrol have been broken, both physically but also very much so mentally.  Most of these people were not good people in their previous lives, nor are they really the best people when the show starts, but they were given a second chance by a man called Niles Caulder, a general scientist type who somehow holds expertise in multiple forms of science and engineering.  However, everything changes when Niles is taken from them by a person calling themselves Mr. Nobody.

The writers and directors for this show really took the time to nail that very, very strange tone of the original 1960s series but mix in a lot of very frank discussion of some messed up topics.  The character’s mental issues and trauma are the main focus of the series, and how they both deal with and then hopefully overcome them. Most of show is this group, that’s ended up together, at each other’s throats, sometimes very much literally.  It’s only when they finally stop yelling and listen to each other that they’re able to deal with the extreme trauma they’ve all been uniquely afflicted with.

However, their main antagonist doesn’t make it easy for them.  Mr. Nobody is not only an evil psychopath but an almost omniscient one at that.  Mr. Nobody acts as the narrator of the series, a title he gives himself, and talks directly to the viewer about the story as it happens.  The twist being, his narration has the ability to become the reality of those involved, adding for some very interesting and incredibly strange twists for our heroes along the way, that we are privy to through the villain’s very humorous monologue.  It also helps along the series that while he could have taken his power and changed the world to his way, there are limits to what he can do, the biggest of which is his own chaotic nature that keeps him toying with the people around him rather than doing something progressive.  Like destroying the world.

This show has been fantastic so far, with incredibly beautiful moments of deep, emotional pain and healing peppered liberally with humor throughout, which helps wonderfully but hot damn this show gets dark.  Cable, this TV show ain’t, and they use that to their advantage with plenty of very brutal fighting, a cornucopia of curses, and a relentless want to never dance around a touchy subject. The writing for each character is spot on as well.  I both love and hate this cast so much because of how human they are, which is surprising when the very first protagonist we see is Brendan Fraser playing a recovering self-obsessive, violent brain inside a robot. These characters are very three-dimensional and develop wonderfully over the course of the show.  Larry, for instance, is a character who was a gay veteran in the 1950s, but in no part does his sexuality become his main trait. He’s a hurt pilot who’s escaping the horrors of what he’s done and what’s been done to him in his past while dealing with an ethereal stowaway that lives in his body. His sexuality is only a part of that, but a very important one just the same.  The treatment of each character and what they bring to the table about themselves, whether it’s grief, multiple personality disorder, or just being different in a time when it wasn’t accepted, are all just aspects of very self-realized characters. I mean, there is a freaking genderqueer sentient street and they’ve been one of my favorite characters (partially because I loved them in the comics as well).

Also, as it’s definitely obvious from what I’ve said so far, the chaotic nature of the original property also holds true in the series, with donkeys that are doors, roaches that prophesize the end of the world, and even speech bubble-style words that are then grabbed and used as swords to kill some nazis.  The show embraces the camp and leans on how strange it’s free to be. It’s a helluva package and the writing does a wonderful job of working with that chaos and making a solid plot with character development through it, particularly through the fact that most of the Doom Patrol are just as groundedly flabbergasted as we, the audience, are.

I realize that this show is stuck behind a paywall for most, but if you ever get the chance, maybe even a free trial for a few days, marathon this show.  You will not regret it. (You also get 20,000 comics to read for free with a subscription so, hey!)

Like, really, I probably could have just explained this series by showing you this clip of a 1950s Air Force pilot singing Kelly Clarkson with a drag queen in a sentient cabaret and that would basically describe this show.