I don’t know if anyone else does this but every now and then, I go back and reread my articles I’ve written.  It’s not for any narcissistic reason. (Though, that’s exactly what a narcissist would say.) I’m not sure if it could be a smaller side effect of my anxiety disorder, but it’s more for fear.  I get so nervous that something I’ve said before will come back and haunt me. Other times, I worry that I’ve written something I completely disagree with now or, just as bad, that I’ve written it so poorly, that my ideas could be misconstrued or actually are terrible in some way.  To be fair, thanks to Facebook constantly bombarding me with “Your posts from 9 years ago!” reminders, I feel I have my reasons to get nervous about what I’ve said in the past. Hot damn, high school me was a dumb shit.

Me gesturing to my dumb-ass past self.

The article I constantly go back to more than any other, though, is my Kill la Kill article, my very first one I ever wrote for this blog and the one that started the whole dang project of The Backloggers.  I think this one, more than anything, I get so nervous about. For one, it’s been one of the single most trafficked articles for our blog, and has been referenced not only in the blogosphere but also on Reddit as well as on a Chinese forum discussing Western and Eastern ideas about sexism.  Which… HOW FUCKING COOL IS THAT?! The Internet is amazing!

However, that’s what scares me.  Even after I wrote it, I didn’t feel as hot about it compared to how I wanted it to be.  And as time has gone on, I constantly think back to what I said, particularly when it comes to the themes of objectification and sexism versus equal treatment and empowerment.  And I’m still not sold. Kill la Kill, to me, has been really complicated in that I feel it does so many genuinely cool and amazing things, particularly when it comes to multiple badass female characters that are so different from each other and fun to see be the leads in a fighting genre anime.  However, while at the time of writing it, I tried to have a good answer for various scenes in the show, looking back, it’s a problematic piece on the whole.  And after recently reading a discussion about these very same feelings from someone else, I finally caved in and decided I needed to review my earlier ideas. 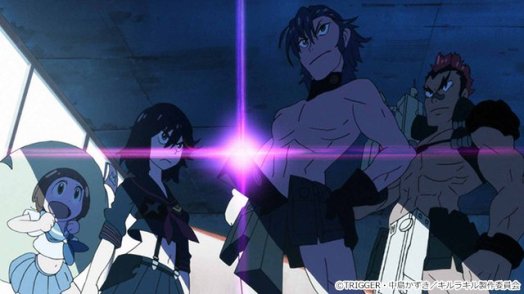 In the original article, I pointed to male characters in the show who also go through many a sexualized scene, stating that the show treats its male and female characters equally in that both are stripped at times and both have screen time dedicated to sexualizing them.  However, the issue in stating this is that in almost every scene that a male character is sexualized, it’s done as a joke. Mikisugi as a character isn’t even seen as serious until we find out he’s the leader of the resistance group Nudist Beach, and that’s well into the show by then.  And even after this fact, most of the show puts his sexualization as a joke for us to laugh at. The feeling that we should be turned on by him is an afterthought.

Compare this to the treatment of Ryuuko and Satsuki, who the camera ogles all the time.  Yes, this is because they’re more important characters than Mikisugi so they have more screen time but they’re also treated differently.  A lot of the fight scenes have them literally rubbing their breasts against the lens of the figurative camera and many times throughout the series they’re seen with various other characters drooling over them or attempting to get a peek.  This doesn’t happen for the male characters, and in fact, most of the time the male characters are nude, the characters in the show avert their eyes rather than eye them closer.

Sellin’ those nonconsensual photos of a minor ’cause, you know, that’s not creepy.

That said, I do think I nailed a point of the show being that we should feel more open and comfortable with nudity.  Outside of sexualization, the show seems to take a stance that people should be more comfortable with their bodies, both men and women alike.  And yes, also that in general everyone should be way more chill with nudity rather than slapping a hard R rating on something for showing someone’s body when a PG-13 can show a mass shooting.  I don’t think the ideas of being more comfortable with your body and everyone in general being more comfortable with nudity are bad things. However, that message becomes muddied when the show trips on its camera shots and decides to objectify rather than empower its main heroines.  This isn’t a constant but it happens and happens more often than can be sanely excused.

I attempted to address the creepier scenes of sex and sexual metaphor of this show later on in the article, stating as an excuse that it’s used in other shows like Game of Thrones but that’s a fallacy in itself.  Just because a work does it and that work on the whole is celebrated, doesn’t mean that either work is correct.  It just means both use scenes and actions in the plot that are pretty messed up. My argument at the time was that “Yeah, it’s supposed to be messed up that Satsuki’s mother sexually abused her”, which… I mean, yeah, that’s fucked up.  Still doesn’t mean it needed to be in the show. There are a million other things that could have been done there. Same could be said for how Senketsu assaults Ryuuko in order to force her to wear him. Still not okay. The fact that assault was played up for a laugh is more than a little skeezy.

All of this said, I still enjoy this show.  The vast majority of the comedy, action, and plot are still incredible.  One of the hardest things I had to learn over these past few years since I wrote this piece was that it’s okay to like things that have problems, to see the problems that are there, not excuse them, and still enjoy something overall.  That was hard to learn and I feel like it’s a continuous process for everybody. When I wrote this article, it was because people had made me mad. I was angrily writing about a show I enjoyed that others online stated was disgusting sexist garbage.  I still don’t think those people are correct. However, the anger I felt coupled with my inexperience with feminism meant that as much as I had good intentions, I was so determined to prove the show wasn’t sexist, I forgot there was a whole gray area in between “holistically perfect representation” and “genuine complete sexism.”  This anime shows that you can have a lot of great things going for you but still mess up in some serious ways.

My largest point is that while I still agree with the overall ideas that I was trying to write originally, my inexperience on this topic and my own ignorance with sexism had me look past the mistakes the show has and attempt to label it broadly as relatively perfect in its execution.  That unfortunately isn’t the case. There are genuine issues with this show that I can’t just explain away under a banner of “sexualizing isn’t just about objectification!” While I do think that overall the show manages to take a high road as far as representing some badass ladies and having a lot of different types of women in different roles, it still suffers from ogling its own cast as well as intentionally objectifying in scenes (either playing it off as a joke or otherwise).

I looked up objectification in the thesaurus and uh… I mean, this is it.

Do I think it’s a sexist show?  I’ve fought with that time and again as I’ve gone back to reread the article and rewatch the show.  However, I still have to say no.  I think overall, at least for me, the anime still succeeds in showing some really badass and interesting female characters, coupling that with some pretty good messages on empowerment and body positivity, and wrapping the whole thing up in a package about fighting back against corporate greed, fascism, and hyper-conservatism when it comes to nudity and censorship.  But that said, it still stumbles along the way multiple times.  That’s okay, though.  Nothing is perfect and I’ve learned that even my favorite shows can have issues.  Just like any human is still just human, our human works will always be as imperfect as their authors.  However, we should always strive to do better.