Episodes one and two were a great introduction to this series and definitely laid the groundwork for what is to come. However, this show very early explained to the audience that it was going to be a slow build and we see that build executed well in episodes three and four as we take a bit of a detour from the posts’ offices and crew to build on our individual characters.

As we left off, Violet is learning to be a better auto memory doll and as such, she is enrolled in a doll training course with several others students. Very early on, we see her excel in her technical skills but as we’ve seen in the previous episodes, when it comes to the basis of the job, understanding and effectively conveying the clients’ emotions, Violet crashes and burns. It’s not until a fellow classmate, Luculia, reaches out and works with her, that we see her progress and beautifully, as they work together, we see both this Luculia and Violet understand each other as well as their own emotions better, eventually leading to Violet successfully writing a short but emotionally effective letter from Luculia to her brother.

This episode and the soon to be talked about episode four seem to share the theme of developing empathy and understanding, from characters within the show, but more importantly, the show seems to also be asking the same from us the audience to the issues certain characters face. This brings up a main point I wanted to talk about, here that I think is important in understanding our main character and the issues she struggles with. That it appears Violet may be autistic.

This wasn’t my idea originally as I watched through episodes one and two. To be completely honest, I’m not exactly well qualified to talk about this as I’m horribly ignorant on this particular mental condition. However, what I’ve learned through others that have more authority on this, I find the fact that Violet Evergarden seems to be tackling this mental condition, or at the very least a similar situation, fascinating. While I originally thought this was an interesting theory when viewing episode three, episode four seems to solidify that this is exactly what the show is doing and, personally, that seems wonderful to me. 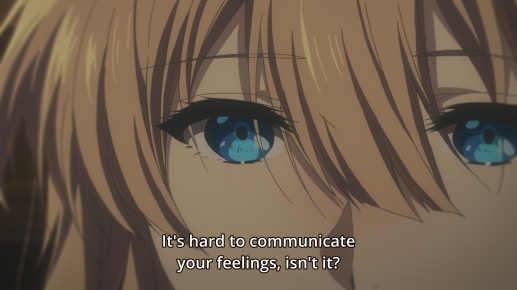 In episode four, Violet ends up through an accident having to type for Iris and is brought back to Iris’ hometown. It’s discovered that the woman that was supposed to be their client was a named borrowed from a deceased relative and in reality, Iris’ family had gotten together to “hire” their daughter so that she’d come back for her birthday. As the story progresses, we see that Iris is not happy to have her family lie to her but is also guilty about the lies she’s told them, embellishing her life as greater than it is so as to seem better off and successful as an adult (an idea I don’t think I’m alone in thinking isn’t out of the ordinary for many). On top of this, a lost love is invited to her birthday party by her parents, with no regard to their child’s feelings on the matter.

This story is very much about Iris dealing with her family and allowing us to expand our understanding of her and the main cast as a whole. However, our eyes and ears throughout this journey are Violet, who throughout this episode is shown to miss the mark in most situations, not quite realizing the nuance and tact that is needed to disarm this massive family-issues bomb she has in front of her between parents who won’t budge and a daughter who is hurting. However, in one of my favorite moments, towards the end of the episode, Iris explodes at Violet and Violet lays it all bare, showing us just how much she comprehends of her own condition. She apologizes that she doesn’t understand, explaining that humans have very complex and sensitive emotions. Because we lie and can’t always express how we truly feel, because we as humans contradict ourselves, it makes it difficult for her to grasp what’s true or not. She struggles to understand and no one is giving her the helping hand when she’s floundering in the complexity of emotion, a sea of completely new ideas to her

This, above all else, explains effectively the struggle Violet deals with and as has been pointed out by others,https://t.co/9P6Ds4oQPm …

the struggles many others deal with. This was such a great moment. pic.twitter.com/OYgXFKhVKc

In this very moment, we have the definition of the mental issue she struggles with and how openly she lays it out enables Iris to understand, if only a little, the fight Violet deals with every second. In empathizing like this, both Violet and Iris are able to work together to fix their situation and leave this town with better relationships, both to each other and Iris to her parents. In their last dialogue to each other in the episode, Violet asks if the letter she wrote from Iris to her parents was good. Iris, without thinking, sarcastically asks Violet “Can’t you tell from seeing their reaction?”, to which a single look from Violet forces Iris to realize the accidental hurt she has caused and to learn to be more open and straightforward with her. She tells Violet it was good and the truth very obviously touches Violet deeply as she realizes the growth she is having. In this way, both characters grow in their relationship and grow as people.

Hot damn, this show knows exactly what it's doing. This is some really good stuff. pic.twitter.com/PtJg1GOs8Q

Now, I understand that the original intention may not be to fully represent autism by name, and I tend to always be cautious of looking too hard for mental health representation from a medium that doesn’t have the best track record, and barely one at that. The writers for this show and the original work could simply be stating that Violet’s lack of understanding on emotion is the result of the terrible life she’s lived through from her previous abuse and the horribly dehumanizing she went through in the war. However, whether this is a born issue or a learned developmental one, that the show in any way acknowledges this is an issue for some people and seems to be working for a positive and gradual overcoming of this issue is fantastic to see portrayed in a medium that rarely deals with mental health at all. And while others much more capable and understanding of autism have stated that the representation is well done, though not perfect, I’m so happy to see a studio tackle this topic in such an accepting and positive manner.

It also should be a case of celebration that this show is expanding on the idea of “love” that it’s been touting around so far. Within these two episodes, we and Violet see the love of a sister for her brother, and the want for him to heal from the brokenness he feels after war and the loss of their parents. We see the love of parents just wanting to bring joy and happiness to their daughter. And though they fight, we see in the letter Violet writes for Iris the love of a daughter returned to those parents. While very obviously, Violet is responding more to the love she sort of knows about, a romantic one, the show itself definitely seems to be pushing a much broader definition. I still fear that the trite and overdone “romantic love changes her” idea is very much alive in this series but damn if the story isn’t branching out from it, and that makes me very hopeful. 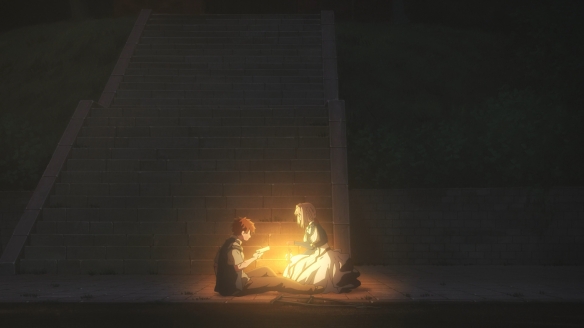 This show is gorgeous, musically beautiful, wonderfully and carefully animated, and it would be beating a dead horse to bring this up in every discussion of it. That is why I don’t mention this but please understand that is in no way an indication of a dip in quality for this show. What this anime does, it does with the level and pedigree that I would expect out of a KyoAni production in which they’re able to pull out all the stops. And this is the same for the deliberate slow pacing and building that we see with each episode of this show. Not just in animation but in direction and story, we see KyoAni doing what they do best.

But that is what makes us so cautious, between myself and Tofu in the previous post. Because this show is so good, and because we’re so captured by the ideas presented, we are cautiously optimistic. We want this show to succeed and the fact that it’s doing so much so well makes us nervous for the one or two major themes we feel apprehensive for. However, that is a good feeling as it means so much is going right for us only to focus on the few points, and I feel like others should be cautiously optimistic too, rather than the pessimism found online for this show that is only just short of a quarter through the series. Rather than expect a failure for something that’s just started, it may be healthier to see this show for what it is so far and hope for the slow build this anime is designed on to pay off.

Outside influences aside, I love theses two episodes and the fact that we see more interesting ideas expanded on and added to the narrative. This all makes me stoked for what’s to come. I greatly enjoyed the emotional moments we see each letter of the dolls bring to those that need it and I’ve adored the fact that through those moments and many others we have a better understanding of Violet and how she operates, allowing us to appreciate all the more what growth and strength we may see from her as the series continues. It says something to feel that this show is a standout in a season of very strong hits and I definitely need my next episode fix soon. 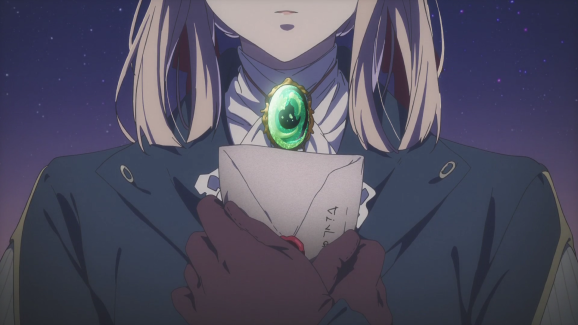