I wasn’t really sure what to expect from a show that basically has the synopsis of “girls join a tank club and fight with tanks”, especially since I heard some rather good remarks concerning the recent film that the series had gotten, but I ended up being pleasantly surprised with the series as a whole. While I still don’t think that it’s the best of its kind and other anime, such as High School Fleet have expanded on this sort of “genre” (if you want to call it that) in a much better way, it’s always good to see the roots from what those newer, better shows were built off of, something I addressed in my previous 12 Days of Anime article.

Girls und Panzer isn’t a complicated story, although it has a lot of guts in making the sort of statement it wants to make. It’s not uncommon in our lives that we need support from others in some way, whether that’s physical, emotional, ect., and there’s not really a better way to help deal with complicated issues that we face except with other people that face similar issues or perhaps have dealt with those issues before. Sometimes it doesn’t even take that much; it just means something being there for you as you’re trying to deal with the heavy stuff. This story isn’t an overly dark one by any means, but the issues that our main cast faces aren’t exactly easy ones to deal with alone.

For example, we have our main character Miho that really struggles with some trauma from her past experiences with tanks, both because of some terrible events that took place during one of the events, but also because of her family pushing her to become similar to her sister, someone that also partakes in these tank battles to a highly competitive degree. This becomes an issue in the first episode as Miho actively is against joining in these sorts of events for the above reasons, and while her new friends are wanting to join, they would rather give up their own passions in order to be together with Miho in their activities. Through that sort of camaraderie though, eventually Miho feels that she can overcome her past fears and decides to participate in these tank events with her friends.

This becomes a sort of running trend throughout the series, as multiple events arise and issues become apparent with various characters in the story, it all boils back to some main thematic elements of “we’re together, we can do this”. Much of the character development that they undergo during this series is because they decide to work together, help each other, and overcome their weaknesses by using each other to enhance their strengths. It’s sort of a standard story that you would expect from one of these anime about all-girls clubs and teams, but that doesn’t mean that the story itself becomes any weaker for that reason.

The tank competitions aren’t any exception to this theme either. There are many instances when a particular group operating a tank wants to try their own strategy instead of sticking to the plan developed as a group, or perhaps the enemy’s strategy is to get them to separate the team into individual units in order to easier take down the tanks and secure a victory.An important part of a club is maintaining that sense of “being together we can accomplish certain goals”, and even in tank competitions, this isn’t an exception. A tank can’t be operated by just one person either, it requires good cooperation, communications, and coordination from your squad as well, which is probably why the subject matter worked so well in complimenting the theme of the show. Furthermore, it wasn’t uncommon that because of the lack of those qualities, teams during the competition would either lose or straight-up underestimate a certain group’s power when they were participating. There were instances where it would seem that a team may have the upper hand in terms of skill, tactics, or manpower, but then it would backfire because they would undergo circumstances that would cause them to lose the valuable power of teamwork, which could end up costing a specific team the entire match.

It sometimes became overbearing at times with how powerful the theme of teamwork was pushed by the show, although if you enjoy shows where “the power of friendship” can triumph over everything else, this show would probably satiate that desire rather easily. Just because it’s overused and sometimes ridiculous to think about though doesn’t mean that it’s not effective. I’m sure we’ve all had times in our lives where things seem to be overbearing in terms of having to deal with them by yourself, or perhaps that you feel that you’re the only one having to deal with those issues. It’s important to know you’re not alone in whatever situation you may be dealing with, and just sometimes having the comfort of others around you can be enough in knowing that everything will work out just fine.

Just remember, you are not alone. 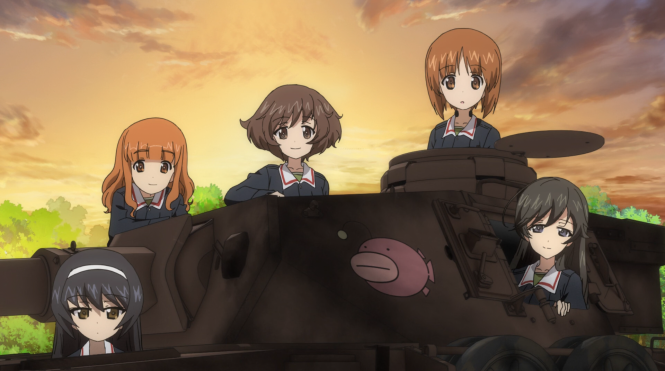