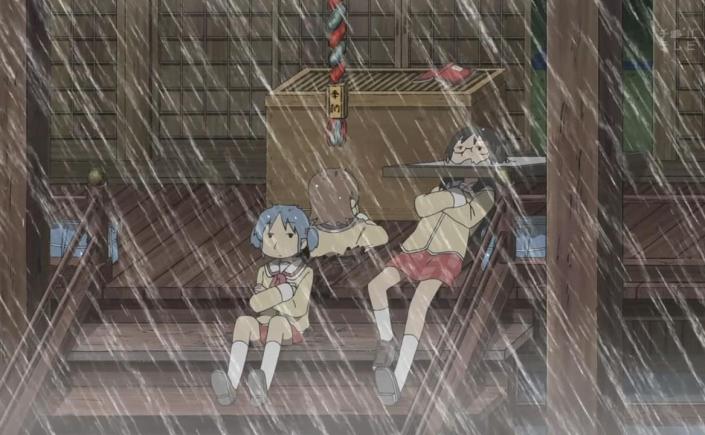 Hey everyone, Mythos here.  November went by and you may have noticed a lack of updates on our part.  It’s funny, the three of us started this blog specifically because we enjoyed talking with each other about anime so much, we wanted to share our thoughts and talk to others about it.  Sadly, we’ve been pretty mute, haven’t we?

First and foremost, I’m sorry that happened.  You’d think three people writing for the same blog could fill in when one of us can’t make a post but a calamity of errors happened all at the same time which ended up with us down for the count and a lack of updates.  So before we head into some honestly amazing articles that happened this past month, please bear with me.  I want to explain what happened here and fully apologize.

Owningmatt has been fighting the good fight and trying to keep on track but he just got a new job that has the most insane hours I’ve ever seen, constant inconsistent scheduling and having to travel hundreds of miles sometimes in the middle of the night.  Even still, he’s been committed to getting our podcast out on a consistent schedule, doing the best he can with everything else with what time he has, and crashing when he gets the chance.  He’s probably the hardest worker out of all three of us when it comes to this blog (but don’t tell him that).

GeneralTofu has been off dealing with personal issues I don’t have the right to really talk about.  For the time being, I’m not wanting to push him into anything ‘cause I love him and want him to get better, but he’ll be back up and going.  He’s strong like that.

I’m uncomfortable talking about it but for me, I’m at the lowest point I’ve been at in my life, mentally.  I’ve managed my issues decently for a while but I scared myself recently after hitting rock bottom and considering some things I shouldn’t.  So I’m getting some professional help and trying to spend time healing but after sitting on my hands for so long, I think a part of that healing is finally doing something for myself.  So here I am.

None of these are excuses, however.  I’m sharing all of this to say we promise not to go on an accidental hiatus again.  Whatever bad times come our way, I don’t think it’ll knock us all out like this again.  I’ll make sure of it if I have to.

We’ve only been at this for a little under three years now but it’s honestly been one of the best things that’s ever happened, for me at least.  I’ve met people online in this community that have deeply inspired me, I’ve even been able to meet up with online people and verify that they’re real (so validating), and I know it’s sappy but the biggest thing I’ve found is a sense of community that I can be a part of.  People in this community are constantly interacting and talking to each other about what they love, celebrating a medium that damn well deserves it after all these years.  I’m thankful for that so much and I hope I can be more of a part of it and talk with you all more moving forward.

So I promise we’ll get back on this horse and keep racing, starting with this post.  We started this blog to try to share our thoughts with others and hear from them about stuff we loved.  And I shared my thoughts.  Time to hear what other people are saying.

THIS IS HOW ANIME BREAKS — kViN from Sakuga Blog

kViN over at Sakuga Blog dissects what the hell happened to the production of Dynamic Chord that’s caused even people in the industry to scratch their heads.  While I haven’t seen the show itself, it’s been talked about a lot around me and kViN does an incredible job breaking down the ins and outs of the people in charge, the issues they’ve faced, and the strange choices that have lead to some of the weirdest art and animation I’ve seen in a full production.

The Afictionado has just been destroying it this past month between the posts she’s put out on AniFem and her own blog.  As someone who’s usually ignorant on a lot of things I really should know something about, it’s been great to get an education on ideas I completely missed watching through shows like Flip Flappers, here.  The Class S genre was something I had maybe heard referenced before but I head no idea what it was.  It’s mind-blowing to hear how effectively this show critiques an entire genre to its core in one episode, taking the elements and style of the genre in question and jarringly inserting them into a hellscape that shows where the cracks in the mask lie.  I loved Flip Flappers for its mind-bending visuals and clever representation already but this made me appreciate it so much more.  This is a good one.

The Superheroes Who Saved My Life — LaKase Perry on Kotaku

This one isn’t anime but it’s important for everyone.  There’s nothing I can say here that wouldn’t cheapen the story and context of what’s said.  Just please, everyone take a little bit of time to read this piece.  It’s powerful and deeply moving, especially, I think, for anyone who’s ever needed a fictional character they can relate to or draw strength from, regardless of medium.

Lastly, I just wanted to share a playlist I made of songs and a couple spoken pieces I’ve listened to over these past two months I’ve been down.  It’s a hodgepodge of genres and styles but each one on here is for the emotional value it has or gave to me, whether happy, sad, or anywhere in-between.  I thought it’d be nice to listen to if anyone’s interested.  It’s mostly just audio, so if you wanna pop it on in the background and hit shuffle, I’d recommend it.

How to Watch “Kino’s Journey” — ZeroReq011 from Therefore It Is

Kino’s Journey may not exactly live up to its predecessor in terms of quality, but that doesn’t mean there’s not anything valuable within the series itself. ZeroReq011 talks about how Kino traveling around the country can be similarly equated to a tourist traveling to a new country, learning about customs and how people live by directly observing their actions. This is something that Kino does in the anime as well, and by doing this, we can learn a lot about how a specific society functions in their day-to-day life and about how humanity survives as a whole just by observing these things. It’s a thought-provoking read for sure, and if you enjoy those sorts of discussions, there’s plenty more at ZeroReq’s personal blog, Therefore It Is.

On a different note, Blackatron talks about some more personal experiences relating to seasonal anime and writing about seasonal anime weekly. Seasonal writing is definitely a major part of the Aniblogging community at this point in time and it’s not been the first time where I’ve heard mentions of it being harder to garner interesting about non-airing shows due to them being… well, not airing. I think this is something we as a community should be aware of, as this method does allow us missing out on good older shows as well. I know we at The Backloggers attempt to balance talking/writing about airing shows and non-airing ones (even though that’s been a bit skewed as of late), and I think as a community, we should definitely try and balance the two, as there’s just so many great shows out there.

And as a brief response to Blackatron’s post, I personally think you should write about what you’re passionate about, whether that’s airing or non-airing shows, as those pieces can make some of the best writing experiences you’ll have. Despite whatever I say though, always do whatever works best for you!

Finally, as a little bit of an informational article instead of one that’s more personal, here’s one that Kim Morrissy (aka Frog-kun) wrote about mobage. If you’re keeping up with current events within gaming and anime communities, these sorts of “gatcha” systems in games are definitely a current topic of discussion over the past month, and this article explains a bit about that along with some other key aspects of how these sorts of games are successful and created. How specific aspects are marketed, how companies prepare to license these games, are just a few topics that are discussed. I encourage you to give a read-over, especially if you’re playing Fire Emblem Heroes, Fate/Grand Order, Love Live! School Idol Festival, or any other mobile games out there. No matter what you’re playing though, always remember to try and keep safe spending practices in mind.

Mythos here to finish us out.  November was seriously amazing for content out there and it was really hard to pare down to just a few things.  Coming up this month of December, we’re hoping to add to that trend with a lot of articles we’re building up to release.  Stay with us here, we’ve got a lot of really great stuff on the way.  Thanks for being here with us and hope you all enjoy the holidays coming up.