Western culture isn’t alone in this.  Japan has infamously been way behind the times whenever it comes to certain parts of mental health.  Depression wasn’t even a recognized issue until the 1990s in Japan, where a campaign gave it the name “cold of the soul” to try and raise awareness and relate it to similar issues in physical health.  And while they’ve rapidly improved since then, there is still massive stigma surrounding depression in Japan, many arguing that it’s just being used as an excuse to get out of work.  And that’s just for depression.  We haven’t even gotten into the many other issues that can affect a person’s mental health or are the results of mental health.  For instance, Japan’s suicide rate is horribly high for a multitude of speculative reasons only assisted by a culture that practices rarely speaking up and disturbing the mood of the group.

This is why I find Psycho-Pass fascinating.  It seems to be directly speaking on the subject of mental health in Japan while also using the world it creates to explore very interesting ideas like criminal behavior, how effective reintegration is for ex-convicts,  the issues of dealing with PTSD, and the flaws of human bias in a judicial system.  However, for a series based all around psychology and the effects of violence on a populace, it gets a particular thing very, very wrong.

Psycho-Pass, for the uninitiated, is a series following officers of the Public Safety Bureau who investigate issues surrounding criminals and “latent criminals”.  In this world, a highly advanced AI system called Sibyl runs areas of government as well as oversees the general populace’s psychological “hues”, a color-coded readout of someone’s mental health.  Because all of society is based around keeping a healthy hue, thereby allowing everyone happier, stress-reduced lives, a massive importance is put on people taking care of their mental health, with plenty of options and available ways to keep psychologically healthy.

However, where a person might not take care of themselves or find themselves in an unhealthy situation, this is where their Psycho-Pass comes in, a reading of the probability that this person might become dangerous to society.  A Psycho-Pass is an number associated to that person that can change everyday, depending on different variables in their life and personality that might affect their hue.  Go over the threshold, and the Public Safety Bureau department will detain them.  Go even further to a point where they would be or are actively terrorizing the populace, and they’ll be shot dead on site in order to protect the peace.  Did I mention this was a dystopia, by the way? 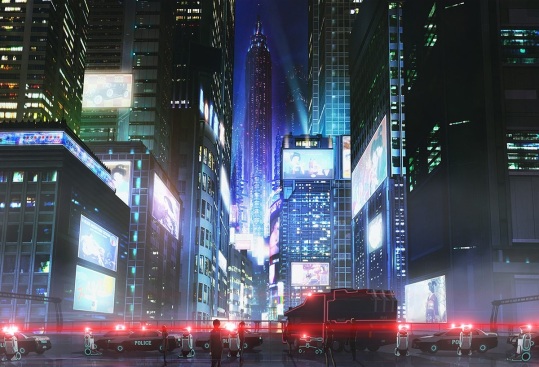 A damn pretty dystopia, though.

This is where the idea of the previously mentioned latent criminals comes into play, an idea that from birth, some people due to their biological make-up are predisposed to be an aggressive sociopath.  Both these people and those who accidentally cross over the line are locked up away from the rest of society.  However, release is unlikely, even if their Psycho-Pass returns to a completely normal threshold.  Most of the focus in this series is on the Psycho-Pass and how it creates a flawed system, permanently vilifying those who may step over the line as well as failing to catch certain individuals if they aren’t correctly identified by the Sibyl System.

When the show is doing this, it is easily one of my favorite stories.  Dissecting a broken system while drawing attention to psychological issues is a perfect blend for a long-story psychological thriller.  This shit is my jam.  However, one idea is spread around in this show that is so horribly misguided, it actually becomes dangerously so in regards to real world mental issues.

The idea that mental illness is infectious. 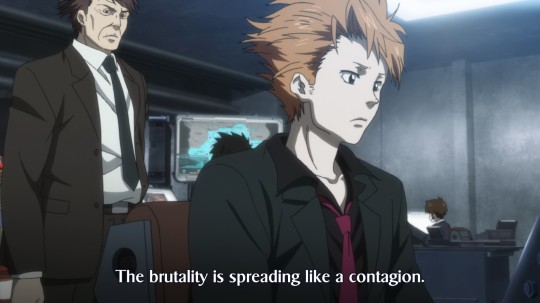 This kinda goes from figuratively to literally pretty quick.

To the show’s credit, some of what it says makes sense.  For instance, in the first episode, a victim is so mentally traumatized by what had happened to her as well as seeing the police brutally murder her attacker, that she’s in a state of utter fear, not trusting the police who so quickly killed someone as well as obviously still disturbed by the horrible abuse she’s gone through.  Very obviously, when they read her Psycho-Pass, it’s well over the threshold for a normal person.  And to the show’s credit, the main character de-escalates the situation and the woman’s Psycho-Pass reduces.  However, this is not the only time this shows touches on this subject nor is it always so nicely done.

Due to a long series of events leading up to it, the main antagonist of the show releases large amounts of criminals onto the streets of the city wearing helmets that don’t allow their psycho-pass to be read, allowing them total freedom to get away with pretty much anything as most police action is automated using robots with very low amounts of actual humans normally needed patrolling the streets.  This causes massive chaos and very horrifying scenes of murder.  However, the town fights back until they realize that in the ensuing chaos, they also can’t be detained and many decide to free roam the city, stealing, smashing, and all around causing havoc.

Now rioting is something that is studied extensively and it is true that crowds can turn from peaceful to crazy fast, with only a few people needed to start mass violence. However, it’s not the setup or the scenes about the rioting that irked me.  It was the smaller scenes of people scared for their lives suddenly snapping, donning insane smiles and mercilessly chopping their attackers and other victims alike.

Apparent infectious insanity as the victims mercilessly murder their abusers with glee.

This is just simply not how human psychology works.  While it is true that for certain scenarios, particularly sexual abuse, previous abuse can be a risk factor for a cycle of violence, but that by itself has shown to not be a direct cause of turning a victim into an abuser nor does it happen so fast and suddenly.  Even people who snap under pressure, rarely suddenly start attacking friends and enemies alike.  On top of this, after everything had quieted down, everyone was sent to emergency shelters to have their Psycho-Pass and hues checked, with the main cast commenting on due to insanity’s infectious nature, these victims of the riot would need rehabilitated.  Something that was further shown with a mentally disturbed victim looking like he was about to snap while being evaluated. 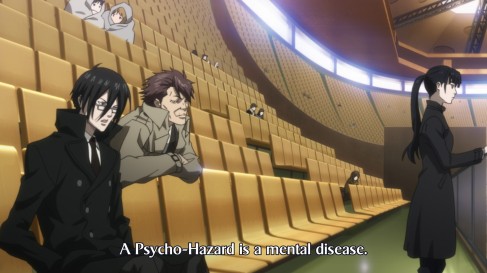 Except that’s just not how that works.

Insanity, a loose term for any severe psychological issue, is not infectious.

Yes, violence and abuse from a mentally disturbed individual can absolutely cause issues for other people.  You only have to look at Post Traumatic Stress Disorder to see the effects of violence and trauma, no matter the perpetrator.  However, to make the claim that a human will replicate that violence they themselves had inflicted on them, suddenly forming the same mental issue their abuser had,  is very dangerous to say.  This is borderline victim shaming and seems to be based off the hugely debated notion that violence breeds a cycle of violence, something that has caused massive fear and added stress to victims in the real world horrified they might become their abusers.  Generally, violence can and will mess people up but it won’t cause people to enact violence on others exactly as was done to them. Rather, it typically only causes mental issues for those individuals and may require psychological help in order to assist in healing.  For a show that champions mental health and the necessity of it, this was surprising to see them get so wrong and then double down by having it be directly involved in the plot of this arc.  We shouldn’t consider victims of abuse ticking time bombs for further abuse and the idea that an exact form of mental illness can spread like a physical disease is just so far off the mark with no psychological basis.

This seems a bit like an old man yelling at clouds situation, where I’m needlessly nitpicking a seemingly insignificant part of the show.  However, the reason why I bring it up is because it’s a dangerous message to spread for a culture that is already stigmatized against those that suffer from mental disorders, with the majority of people in Japan stating that most disorders are just bad behavior rather than a serious psychological problem, going so far as to distance themselves from sufferers of various issues, isolating them.  That’s a huge deal.  The only reason I’m even okay talking about my own problems with others is due to the fact that there’s more acceptance in my own culture.  I can’t imagine the isolation others in Japan may feel, with no one to support them.

Heading back to Psycho-Pass, all of this is not to say that Psycho-Pass is a bad show.  On the contrary, this is probably one of my favorite shows that I’ve seen recently and I love all the clever ideas and philosophy it explores (though, I sometimes feel like it gets too dark for the sake of shock value).  I’d still highly recommend giving it a watch to anyone that enjoys very dark crime and psychological thrillers.  It was just a little disappointing to see the show go so far to comment positively for mental health and the necessities of taking care of yourself without stigma, but then fall suddenly short in this one regard, holding victims with suspicion for issues caused to them.

(I don’t have a good ending image so here’s the sick as fuck second OP that gets me pumped every episode it plays.)

On a similar topic:

Inspiration and Research for this Topic: