I have to be honest, when I went to watch episode 4 of SukaSuka, I was interested in where it was going to take me. Was the show going to take us on a long journey where nothing happens, but we learn a lot about the show’s world, as previous episodes thus far have done? Since we just saw Chtholly, Ithea, and Nephren go off to Island 15 to fight against the 17 Beasts, are we going to see some over-the-top action sequence, switching out our fairly consistent viewpoint of Willem for that of our battle fairies? Are we going to get some action four episodes into this season that isn’t just a brief sparring match?

Not to nab some of the thunder that Owningmatt93’s previous post signaled, but episode four is, interestingly, still more of the same, but in many ways, we also see the show shift slightly – steadily-paced world-building, getting to know the cast a bit better, and…a lot about lizard romance films?

I’ll admit, I was somewhat surprised that we did not see any actual combat whatsoever in this episode. We’ve had quite a bit of buildup so far about the potential of what combat could look like in this show – the initial scene of the first episode hints towards a storm of a battle brewing later on, we’ve learned quite a bit about how the leprechaun girls in Willem’s care are essentially living vessels that can use dug weapons to fight the 17 Beasts, and as recently as episode 3, we saw Willem sparring with Chtholly, telling her that there is a new way to fight with the dug weapons aside from opening the fairy gate and expending her life, and showing her how to care for and maintain her dug weapon. It really felt as though there might have been at least some small shred of an action scene to demonstrate how Chtholly might take what she has learned from Willem and apply it in some visceral combat. In many shows that have combat, magic and the like as a central pillar of its world that it is presenting, it is not entirely uncommon for this kind of foreshadowing to lead into some serious swords-and-spells eye candy. 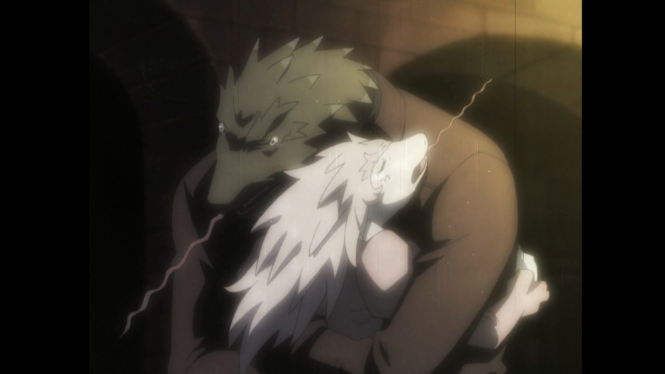 Really, though, this episode of SukaSuka goes as far away from that idea as it possibly can, because of all of the scenes that it could have started with, it shows us the end of a lizard romance film being viewed by Willem, some of the girls, and Nygglatho. In a sense, for myself who was going into this episode expecting something perhaps combat-oriented, or at least hinting at some great battle to come later in the episode, we’re given this scene that really acts as an antithesis to these expectations that are set up. All things considered, I suppose I shouldn’t have expected anything from this show except for it to do its own thing, and that’s what it does. With the film at the beginning of the episode disrupting any potential expectations of heavy combat, the levity of the situation serves to make the reveal that Chtholly, Ithea, and Nephren have been gone for half a month with no news a bit easier to stomach, both for us and for Willem, who is, understandably, definitely worried at this point. Or rather, more worried than before. 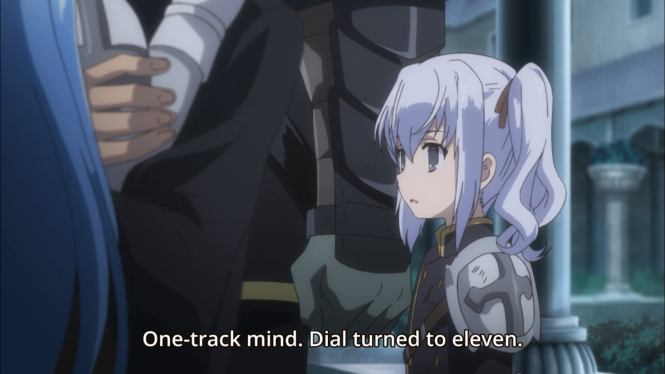 It is this initial scene – the levity of the situation serving to keep some of the more serious elements from becoming oppressive in their weight – that sets up the ebb and flow of the rest of this episode. After the film and a short conversation at a café, Willem brings one of the younger fairies, Tiat, to Island 11 and the City of Corna di Luce to get a checkup because of a special type of dream that she had. On the way, Tiat gets consistently sidetracked because she wants to go sightseeing. After all, Corna di Luce is the laction that many of her favorite lizard romance films are set in. We learn a good bit about the city itself, Tiat’s deep love for these films, some of the lore behind the films themselves, the existence of what seem to be automated golems, and a very brief introduction to an organization that seems to be called the Annihilation Knights. All of this is done before the duo reaches the point of Tiat’s checkup, and in step with what the show has done before with its worldbuilding, it feels natural. There’s no deep, long infodumps, and even when there is a good bit of dialogue, it honestly feels like conversation, rather than clever plot dispensing. It’s genuinely an enjoyable romp around the city, and it provides a great bit of lightness for the story before we get to the harder stuff – like what the checkup means in the first place. 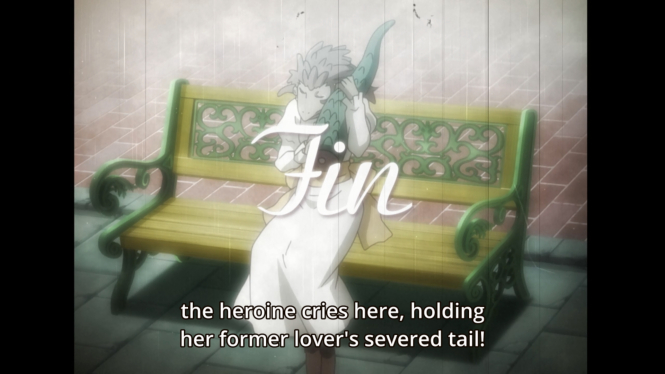 But before that, let’s have a bit more film trivia. Feel your horizons being expanded.

Essentially, fairies that have this harbinger dream awaken the power to use the dug weapons – only those fairies that have this dream can wield them. Once a fairy has that dream, they are brought to Island 11 for their checkup, in which they are “tuned” so that they can use the weapons. Of course, Given his history with caring for children which we still admittedly know little about, Willem is bothered by this, and it only serves to further his internal worries. This is only the tip of the iceberg for the weight of this episode, however. The first half of the episode was the levity to give the rest of the episode, this second half, the time and tonal space it needed for the other bad news Willem receives. After seeing that Tiat is doing well, he learns that he needs to come pick her up the following day, so Willem decides to board overnight at the Guardian Wings Military HQ in the city. After his night’s rest, Willem awakens to a rather foreboding downpour, and not long after this, he learns that word has come back from the battlefront – the battle for Island 15 was lost. 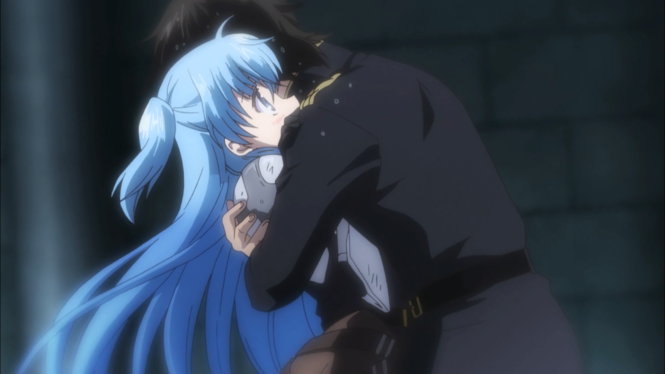 Of course, this brief missive he got out of a shaken officer failed to mention that the three young fairies are all still alive and well, leaving Willem a shattered mess in the rain – until he sees them as they proceed into the Military HQ, of course. The payoff, and the return to levity in the episode’s ebb and flow of lightheartedness and seriousness, is extremely gratifying as Willem dashes off with inhuman speed straight into a bear hug for Chtholly. Heck, the episode goes full circle and gives us a mirroring of the ending scene from the film we saw at the beginning with said bear – or I guess lizard – hug. It’s probably the most emotion we’ve seen from Willem thus far, and it really goes to show how deep his affection and his desire to protect the fairies goes. We honestly don’t learn anything about the battle from this, except that the defense failed and the fairies are all still alive, so we have that bit of curiosity waiting for us next episode. From one perspective, this episode did not do much at all. We had a tour of a city, got a bit more information about the fairies and dug weapons, and saw the girls return safely from the battle. However, if we consider this from the perspective of SukaSuka’s MO, we really find that it is continuing its slow burn of clever worldbuilding, incrementally delving deeper into the psyches of its characters, and genuinely keeping interest for what might happen next afloat. Despite the expectations one might have for the show if one approaches it as a product of its genre, SukaSuka continues to follow its own pace, and even though it might not feel like it is doing a ton on the surface, there’s quite a bit stirring beneath the waters.