SukaSuka this week continues to keep my interest by continuing to move the story slowly forward and satiating my curiosity towards our main characters. While this episode has been pretty low-key in terms of dramatic scenes, it still turned out to be a pleasant experience all around. It’ll still take a few more episodes for me to buy into the fantasy drama aspects though, as it seems to still a bit rough around the edges as the series continues to try and figure exactly what it wants to accomplish. That doesn’t mean I’m not enjoying the ride though; it only means that I’m weary about some of the ways the story is being told, and I’m not thoroughly convinced that it can keep at its current rate of progression without losing the strong bits of quality we’ve seen thus far.

A prime example of this would be the first half of the episode. On the surface, it was an interesting look into the backstory of Willem, slowly leading us into a deeper understanding of the character hinted at us in the previous episodes. The backstory even had some comedic cuts back to reality to take the edge off of some of the emotionally heavy segments, proving to us that this adaptation is balancing itself quite well. This likely isn’t going to be a full-fledged dark story revolving around the never-ending suffering of these characters, although it’s almost guaranteed from parts shown in previous episodes that this anime will likely become hard-hitting and emotional at some point.

Further examining the execution of this backstory though brings attention to some issues upon its delivery to us, the audience. This episode ended up using a lot of expository dialogue to unravel this backstory behind Willem, something which the series so far has cleverly avoided doing in large amounts, if at all. While this isn’t necessarily problematic in of itself, as the middle of the episode where this is most prevalent seemed to fly by pretty fast for me, others could easily see this as an argument against the show for not utilizing “show, don’t tell” to its advantage in these segments.

It probably doesn’t help that the dialogue within these scenes felt really stiff as well, but I don’t think the novel or the anime is to blame for that.

This isn’t a unique quality to SukaSuka though, as it’s just one of many of the typical flaws that light novel adaptations tend to have and sometimes lots of necessary information has to be conveyed via dialogue in order for the story to progress properly. Sometimes this can even be used to the work’s advantage if done correctly, as I’ve previously talked about before. In this first half of SukaSuka episode 3 though, most of the dialogue wasn’t being used in an exploratory manner for Willem’s character, but served more as a supplementary explanation in case the visual telling wasn’t giving us enough information. What’s interesting though is that the visuals themselves did give a good representation of the story on their own, something that many other light novel adaptations have lacked.

Because of this, the dialogue didn’t feel like it hurt the telling of the backstory in any way, but did not enhance it either, and, in some instances, would have been better off removed. Letting the animation itself provide the impact upon the viewer would have given the episode what it needed in order to be on par with some of the memorable scenes from previous episodes. An example of this would be the opening scene from episode 1, and I’d like to see more of those in the future, as large segments expository dialogue can become a reoccurring problem in an adaptation, especially for ones based on light novels. Speaking of issues I had in the first half of the episode, I also disliked how the battle scene with Chtholly was handled, particularly the segments where Willem just acted like he knew more than everyone else about fighting these creatures, when it was even revealed later that he had also struggled against these Beasts in the past. It was problematic in both the perspective that it came before the backstory reveal, so his playful, yet slightly conceited attitude contrasted with his normal friendly demeanor, and also became problematic to the viewer in terms of the scene suffering from the trait of the “all-knowing protagonist”. By this, meaning that the protagonist in a show just knows how to solve any problem that comes his way, whether they’re given a genuine reason to or not. 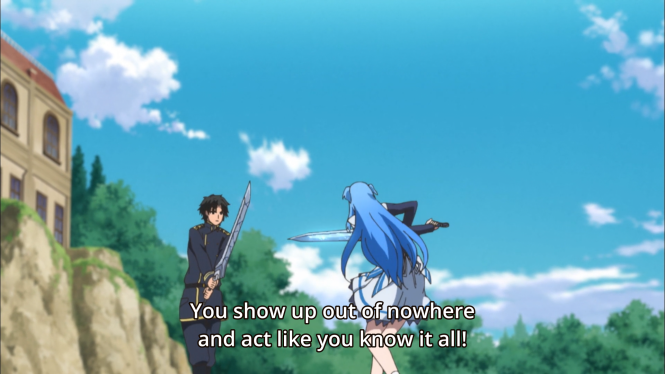 Luckily, the latter didn’t really become an issue in this case, as the backstory was explained promptly after the scene, but the former remained a complaint of mine throughout the entire scene. While Chtholly may still be a younger character, she obviously has some knowledge of the battles she’s been fighting all this time, and therefore it seems a bit odd that someone that hasn’t recently fought these creatures is trying to push his knowledge onto someone that possibly has more up-to-date and more complete information on fighting these Beasts.

I understand that Chtholly is also still a younger character than Willem and would be more likely to lack knowledge in certain areas that Willem may be knowledgeable in, but does that really give him the excuse to talk to her like she knows little to nothing, even if she was acting a bit childish during this scene? My only reasoning is that perhaps we were supposed to be able to sympathize with Chtholly’s passion to fight until the bitter end by relating to Willem’s desperation for her to remain alive, but I’m not sure if we’ve spent enough time with these characters (or the show at all, for that matter) for me to buy into that reasoning just yet. This leads me into another worry that I have for the future of the series, which is what most people would refer to as the “pacing” for the series. So far, the series has done a fantastic job of doing lots of world-building within the background of the story. For example, specifically in this episode, I liked how they focused on the weapons and their functionality more so than just “it’s a sword used for fighting the Beasts”. I personally have a fascination with weapons in fantasy settings and I love it when any form of media goes into vast detail about their functionality within the world, and this episode did that rather well, revealing that these weapons were composited together from talismans created from smaller kinds of wishes to form these larger magically-powered swords.

What I’m a bit skeptical of though is if this series can maintain this level of world-building without turning it into a excellently-built fantasy world where nothing happens (I still have nightmares about the Atelier Escha & Logy anime), or it turning into an exposition-heavy bore-fest that attempts to build the world as quickly as possible in order for the plot points to continuously progress. The world-building is one of the main things I’ve appreciated about the series thus far, and I’d hate to see all of that ruined by the adaptation attempting to rush it in order to get to the more action-heavy and dramatic moments, as much as I would love to see them. There were also some parts of the episode that had a mix of drama and comedy that I don’t think was a bad idea, but could have used some better execution to create the impact that I would have loved to see out of this episode. To be honest, I’m not even sure the type of comedy this show was attempting to go for this episode, as near the end, the comedy seemed almost a sort of self-aware meta comedy upon the tropes of fantasy drama light novels, but that seems rather hard to execute when that sort of humor seems to contrast with the more dramatic elements of the series. 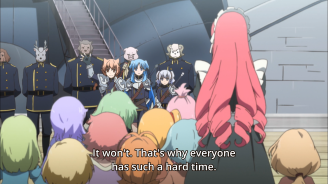 Outside of my complaints though, I came out of the episode overall satisfied, even though I felt that many parts could have been more polished and refined to create the impact that this series needed to strengthen itself even further, especially since right now we have no idea how long the anime will go on for (a mystery cour, as we call it). I doubt it’ll be the top anime of the season for myself, but it’s definitely trying to be different from other fantasy novel adaptations, and I greatly appreciate that from the series as a whole.

Moving forward, I’d like to see the more dramatic and romantic aspects of the series sooner than later because I’m really excited to see what sort of twists this anime has in store for all of us. Hopefully the future episodes can beat the trends that light novel adaptations typically turn to as they progress, and I’d absolute hate to see an anime that had a solid start come to a conclusion no different than many others within its genre.

4 thoughts on “SukaSuka Episode 3 — More of the Same”