Every time a new season of anime rolls around, I take some time to look through the season’s offerings and decide what shows I’m hyped about, what I might give a look, and what I will more than likely pass altogether. Generally speaking, I check out most shows’ available PVs and do some digging into the creative teams that have been working on the show. These factors are most often what inform my choices of what I decide to check out, and what to perhaps get excited about. What acts as a preliminary informant to me before I even get to that stage of digging, however, is the simple survey of show genres–in contrast to the great deal of digging I do for shows that I follow, I often don’t pay much mind to shows that don’t seem even remotely interesting to me as far as their purported genres indicate.

Usually, I tend to breeze past shows that are tagged as ecchi, for example. If a show is branded as “action, comedy, ecchi, romance,” more often than not, you can bet that I am not going to be following that show in the slightest. That being said, I don’t have anything against the ecchi genre–I know many people that are fans of shows within the genre as a whole, and I know that, in some senses, it can be fairly diverse in how it appeals to different audiences within the genre fanbase through various modes of sexual fanservice. There’s all sorts of arguments that people can make about the genre with regards to, for example, how it might appeal to a male gaze, which, if you really want to get into that, seems to ignore the existence of any alternative gazes (lesbian gaze, bisexual gaze, etc.). But that’s not a discussion I’m going to get into here. Everyone has their own opinions as far as genre goes, and they’re entitled to those opinions. Some people don’t like mecha anime; some people don’t like slice of life; I myself generally don’t like ecchi.

I would have to say that the biggest reason I generally avoid ecchi shows is that in my experience, sexual fanservice is often the core of the show (to nobody’s surprise), and the show’s plot, which usually has nothing to do with anything sexually-based, is more just an excuse allowing for the sexual hijinks to even exist. For myself, if I am going to take time out of my day to watch a show, I personally don’t want to watch a show that has one very strongly developed aspect with the rest falling by the wayside. In that sense, ecchi shows, to me, are often shows with entirely uninteresting plots in which sexual fanservice acts as a buffer or a filler for a general lack of compelling content in an uninteresting story. I get that the fanservice is the point of the genre–I’m just not interested.

It’s almost exactly like Goku and Vegeta’s Kamehameha Wave vs. Galick Gun standoff…only if they were using their butts.

Imagine my surprise, then, when I came across Keijo!!!!!!!! in the Fall season’s slated lineup. In a brief summary of the show, it states very explicitly that “The aim [of Keijo] is to push the other contestant off of the platform into the water, but they are only allowed to use their butt or breasts to push the others off” (emphasis and bracketed addition my own). I was intrigued–where many other ecchi series would give a summary of the show that obscures its ecchi-based elements, Keijo!!!!!!!! leans fully into its ecchi status. The show knows full well that its plot revolves around showing a heaping helping of boobs and butts, and it wants to make that very clear to its prospective viewers. It makes sense that this degree of fanservice would be at play in the show, and as such, it isn’t counter to the tone that the show is trying to set (Lauren Orsini talks a good deal about this in a recent post about fanservice, as well). This sense was only heightened when I saw an English PV for the show–the PV showed me that Keijo!!!!!!!! was not, in fact, a show about boobs, butts, and lewd things being done to them that had some shaky story constructed around it. To me, it showed that Keijo!!!!!!!! was a show about boobs and butts in a world where they actually have a sport centered on them, and that as viewers, we should get hyped about all of these elements. Keijo’s plot and world aren’t constructed as an excuse to have boobs and butts; they all work in tandem together to make a cohesive whole that comes together in the form of over-the-top combat a la Dead or Alive Xtreme.

To me, this convergence of different elements of plot, fanservice, and an unabashed sense of not taking itself very seriously is one of Keijo!!!!!!!!‘s greatest strengths, and what makes it actually palatable to me. If we look at what the show is largely classified as genre-wise, it falls under sports, comedy, and ecchi, and we can see how the show works to effectively incorporate all of these elements. I mean, for example, the students hoping to go pro study subjects like “Boobology” and “Asstronomy.” It’s incredibly silly, and the show knows it. So, for example, when we get a shot of instructors or classmates commenting on each other’s backsides and how they’ve gotten tougher or thicker or what have you, it makes sense in-universe. It is very much still sexually-based fanservice, but it isn’t breaking the flow of the show.

This “fanservice works in-universe” portion even works for some of the average still-frame fanservice-ish shots it includes.

I don’t particularly care for shots like the one above, but in the context of a sequence showing students doing their daily training routines at their academy, it once again makes sense in the universe of the show. It’s not as though this sequence comes out of nowhere and disrupts an ongoing, unrelated scene; it is working to show the norms and systems of this academy within the show. The norms and systems that the show sets in place are admittedly silly, but they are central to the show, and they are not detracting from the core viewing expectations for the show.

In thinking about the systems that Keijo!!!!!!!! sets in place with relation to the fanservice it shows, the show is also surprisingly consistent in how it works these into the world of the show. In episode two, for example, we start off with a training montage of the students doing a number of different exercises, such as “butt figure eights.” 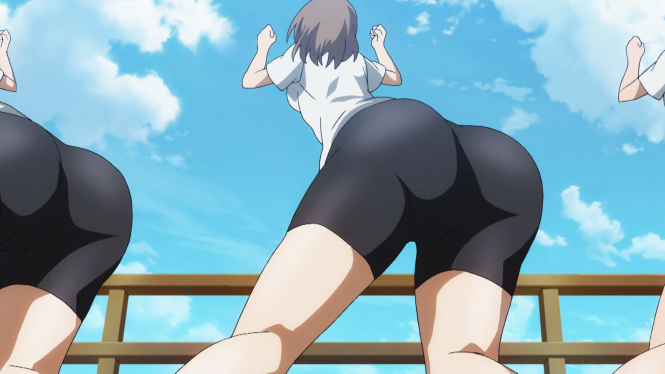 So we get this sequence of in-your-face butt shots of these exercises, and they’re obviously supposed to be titillating in the moment they’re shown being done. But, about halfway through the episode, we see them doing butt figure-eights again, and we’re shown them in a different light (literally and metaphorically). Here, the exercise isn’t meant to me any kind of vehicle for sexual fanservice. It’s just an exercise in the world of the show, and even though it was used at one point as fanservice, it’s a tool for Kaminashi and her friends here to train with.

We haven’t even discussed the best part of the show, though–the Keijo “races” (as they call the bouts in the show) and the special moves. Like numerous other sports anime, the players of Keijo have a wide array of special moves that defy the laws of nature, ranging anywhere from flexing butt muscles to be literally almost as hard as steel, to “titty hypnosis,” to making an air-shredding vacuum with one’s butt. It is, in following with what I’ve said before, all completely ridiculous. It is also insanely fun to watch, by virtue of it being over-the-top to the point that it is nothing short of hilarious and genuinely exciting.

What’s possibly the most interesting thing to me about the special moves in Keijo!!!!!!!! is how, in some ways, it further changes the nature of fanservice in the show. We already mentioned previously how there is a sense of consistency with the systems that the show sets in place (e.g. butt figure-eights were fanservice but also an actual tool for Kaminashi et al.). This is also directly relevant to the girls’ use and ownership of their special moves. When a special move is used, there is usually some frame or angle of the move that, out of context, could be seen to be fanservice pandering. However, the girls make them all their own. There’s absolutely no embarrassment when they use these moves. Sayaka, for example, might use her K-Acceleration (or W-Acceleration, as the subs seem to call it; pictured below) in much the same way that Jotaro Kujo might pummel a foe into dust using Star Platinum–both of these are, in some ways, shows of power, expertise, and extensive training, and Sayaka’s move just so happens to make use of her posterior.

It’s that ownership of these moves that really makes them so gratifying to watch. They often do still fall into the category of fanservice, but they are (almost) never centered on in such a way that it feels like we’re taking time to ogle them and interrupt the action of the show. The girls just dish out the moves like they would do in any other action battle show, they have fun doing it, and the race sequences are, as a result, immensely fun to watch.

This just wouldn’t be as satisfying a move if instead of following this up with more head-on combat, we got, say, a five second shot of Fujisaki’s boobs bouncing post-impact. Also, Shoryucans. Absolute gold.

That being said, I’m not necessarily saying that there is no aspect of Keijo!!!!!!!!’s fanservice that can appeal to people in the traditional ecchi genre sense–what I have presented here is just my perspective on how the fanservice has come across to myself, and how I have heard it explained by some others that also watch the show. I am also fully aware of others that watch the show and do watch it for those traditional ecchi aspects, and let me be clear, there is nothing wrong with that. As I said at the beginning of the post, everyone has their own tastes in anime, as well as different expectations for what they want to get out of a series.

I guess that, in summary, I appreciate and am impressed by how Keijo!!!!!!!! changes up its use of fanservice in certain aspects of the show. It’s weirdly refreshing to see that, even for a person such as myself that isn’t much into the sexual fanservice aspect that so many series seem to incorporate, Keijo!!!!!!!! is able to retain this fanservice core and still make itself one of my favorite shows of this season.

One thought on “An Alternate Look at Fanservice in Keijo!!!!!!!!”