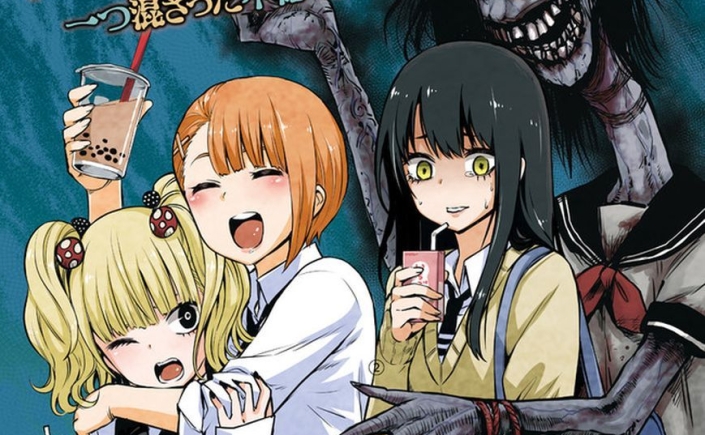 I’m a bit of a newcomer to the scarier elements in Japanese culture, only recently seeing both adaptations of The Ring as well as getting started on the collected works of Junji Ito.  However, I think because of my initial hesitation into scarier media, I found myself in a perfect spot for something horror-light – a series that can give you chills without endless nightmares if read right before bed.  And so, in a strange mix of genre, I stumbled across an indie manga from Pixiv called Mieruko-chan or, its English title, The Girl Who Can See It.

In what becomes a constant test of stoicism, Miko suddenly finds one day that she is able to see spirits, particularly incredibly evil ones.  However, terrified, Miko takes a chance and pretends she can’t see them at all, finding this makes the spirits leave her alone.  Mostly.  While this begins as an episodic journey into the daily life of a girl terrified out of her mind, a story begins to form around Miko’s slow descent into a world of mediums and characters haunted by their past decisions and cast aside relationships.

Miko fumbles her way through missing answers and failed solutions to how she can suddenly see spirits, all while avoiding giving up the ghost about how very visible the evil spirits around her are.  And they are incredibly frightening to look at.  The art is fantastic, showing a very dissonant style between the human world and the world of the spirits, and spares no expense when it comes to just how grotesque not only the designs of each spirit are, but also their vile, constant dog-eat-dog mentality when it comes to consuming other spirits and feeding off of humans.  Many pages are filled with multiple spirits interacting in our world in ways we never notice, and their chaotic nature and population density becomes a constant anxiety for Miko as she goes through her day.  It doesn’t help that her best friend by coincidence has an aura so powerfully positive that it attracts spirits like moths to a flame.

Miko eventually goes to a shrine, which leads to her making a deal with a god that she doesn’t know the details of.  Desperate, Miko stumbles across several others like her, with varying ability and knowledge, who all have their own thoughts and feelings about Miko herself.  One girl, due to a misunderstanding, becomes a bit of a nemesis/friend of Miko, while Miko’s extremely negative power causes a fortune-teller to go out of business.  Even much later, a strange YouTube sensation takes an interest in Miko, with his intent not seeming quite as morally appropriate as he pretends.  All of this appears to be building up to a climax.

While it’s very apparent how episodic the series starts out to be, the later chapters that delve into a continuous story have made the series much more appealing to me.  It’s also an oddly humorous series for how dark the art is.  Miko’s internal reactions to many of the sudden jumpscares in her life only further make most of her deadpan externalized statements hit harder.  Also, while the manga enjoys its own shock value quite a lot, there are several smaller stories that hit on an interesting emotional level, such as the suspicious man who’s haunted by his previous pets, or Miko’s own ghosts of her past reaching out to her.  The discussion of death and how it affects us all differently is very much in the background, but poignant in its own subdued way.

My own personal negatives I find with the series is how exploitive the series can be of its protagonist.  The manga invokes a kind of “what kind of mental torture will Miko have today?”, which when played as the horror it is, seems understandable.  However, several situations, one particular one involving a very handsy ghost, seems to be played more for laughs, which can hit wrong, depending on the scenario.  Overall, however, I very much am enjoying the series and hope that the artist, Izumi Tomoki, gets the support they need to keep it going.

If you find yourself searching for something more horror-light, I think The Girl Who Sees It definitely is worth your time.  Its mild scariness mixes well with most of the humor, and comes out as a twisted take on a slice of life mystery. Dedicated horror fans may find it not quite their spice level, but I feel most would be at least amused at the odd uniqueness of the manga and its gorgeously grotesque artwork.

One thought on “Monthly Manga – The Girl Who Can See It”