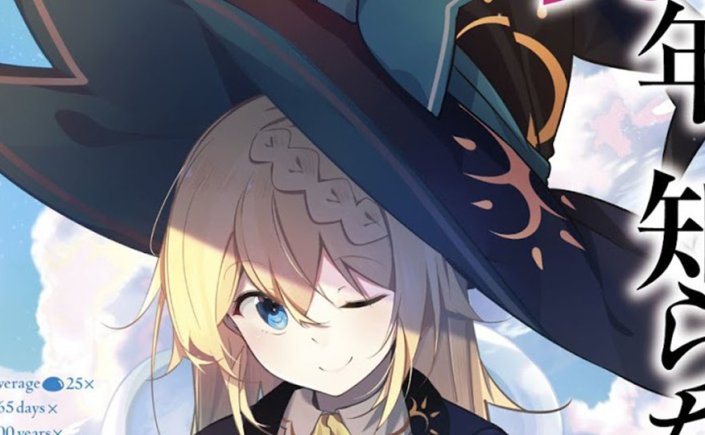 If it’s not obvious from the title, this is 100% an isekai light novel story.  Rather than your typical one, though, this one caught my attention because it wanted to go for a different approach, which will always catch my eye.  The manga (as it’s the version I ended up reading) follows our main lead Azusa Aizawa who is a businesswoman that literally works herself to death. A god or being of some sort takes pity on her and sets her up in a new life as a young mage with eternal youth/life.  Azusa decides that this will be her retirement and begins a life in another world doing… absolutely nothing. Having worked all her life since she was old enough to, she doesn’t want to do anything at all related to work. She gets by killing the “lowest level” (the world has MMO logic but it’s a fantasy realm) creatures she can find, slimes, and selling the gems they drop for the various food and resources she needs.  Being immortal, she ends up doing this for so long that she’s become quite a powerful being and even a well-respected individual in her small town thanks to her healing potions she makes in her free time. However, after Azusa finds out how truly godly powerful she’s really become, she does everything she possibly can to avoid interrupting her streak of 300 peaceful years as a hermit. Too bad someone leaked how powerful she was to the world and now creatures far and wide have come to test her might…

I’m not usually a huge fan of isekai stories but what drew me to this one is the simple twist premise of a person who is basically so dead set on avoiding the adventure trope of isekai like the plague that she will literally lie to a dragon’s face and hide in her home rather than come outside and fight.  Azusa spends the entirety of the manga just avoiding fights and trying to live a peaceful life. Because of the this, the manga reads very much as a fantasy slice of life, something more akin to Dragon Maid’s approach to fantasy rather than a tropey adventure story of waking up in another world, with plot armor for days because they’ve won the unbeatable protag lottery, and also magically save the day and get the girl.  In fact, every time that something like that pops up, our protagonist finds some way to avoid it, run away, or end it quickly and get back to tea and snacks on the hillside, like she’s allergic to being a main character.

As the series goes on, obviously our protagonist can’t get exactly what she wants but Azusa does find a sort of gathering of oddballs that ends up being her found family in this world, and spends her days in odd but small hijinks because of them.  The story does a good job of naturally exploring its world’s logic and slowly building its cast over the course of the manga chapters out so far. The hijinks are also very subdued compared to a lot of the typical isekai formula, with clothes staying on and outfits usually pretty normal for fantasy rather than bodacious.  I think a part of what helps this along is that our protagonist is a woman and so the story treats most interactions as platonic, though, this also brings up the issues of characters throwing around the “Of course I wouldn’t be interested in you, I’m also a girl” excuse.  So, LGBT progressive, this isn’t.  That said, aside from the occasional awkward scene, this one’s pretty tame as far as the typical pervy stuff you’d see in isekai and I appreciated that.

It may sound like a small gripe with the isekai trope but it’s also been in my experience that, in general, isekai stories suffer from pushing fan service over better telling a story, at times.  I typically find it a turn off from a story perspective if pacing and cinematography suffer because the writer/director/mangaka is more focused on shoving boobs in my face over showing an interesting shot of the cast and background, or other times, having an unnecessary bath scene and boob grabbing jokes when not five minutes ago, our characters where in the throes of depression.  It’s just really awkward and takes away from the story trying to be told, and that’s ignoring the sexism of the whole thing. Anyway, tangent over. I appreciate when series like this one tone that down and allow us to just enjoy the story for what it is.

All in all, this is a fun one.  The writing isn’t amazingly strong but the setup with this twist on the isekai trope is nice and allows this one to stick out for me.  I’ve found in a lot of isekai stories that the episodes that just allow the audience/reader to live in this world and explore it are usually some of my favorite.  It’s cool to have awesome battle scenes, drama, and romance. However, give me some time to see your world, its complexities, and how it all works and I’ll believe it way more.  Seeing how characters act and behave when there’s no world-ending monsters or infinite crises can be just as fun and interesting for me as any dramatic plot when done well. While this series doesn’t knock it out of the park, I think this story does a fun job of exploring that idea so far.

I’m having a hard time tracking a source for the manga that’s been published outside of Japan but if you’d like to give the source material a shot and support the author, the light novel is available where they usually sell ‘em and if you can’t find it locally, Amazon’s got you.  Also, funnily enough, Owningmatt here on the site happened across the light novel independently of me and gave it a thumbs up so this one’s got The Backloggers’ 2/3 approval rating, I guess!