3D Kanojo, on the surface, isn’t exactly a show we haven’t seen before. At first glance, it appears to follow the archetypical show/book/etc. formula of “nerdy boy finds love through beautiful girl”, a trope which, obviously, is fairly problematic. But there is far more to this show going on below the surface. From these first two episodes, we find that, in fact, it has so far come to us as a show about harmful misconceptions, and how looking beyond them can lead to genuine, satisfying relationships. While there’s a lot that we could focus on for a discussion of this show, I want us to look specifically at our main characters, Hikari Tsutsui and Iroha Igarashi, and the fascinating, complex spaces that they inhabit.

Tsutsui is, by all accounts, a fairly established otaku. He’s big into video games and anime, never misses an episode of his favorite mahou shoujo show, and is pretty much totally withdrawn from society, aside from his other otaku friend, Yuuto Itou. A fairly dangerous side effect of his own personality, though, is that he has a tendency to distrust pretty much anyone that he does not allow into his own circle, which is already remarkably small. So when we find him and Igarashi stuck together for pool cleaning duty, he is suspicious from the get-go. To Tsutsui, Igarashi represents the “pretty, shallow, delinquent” type of person that he despises. He makes a decidedly solid judgment of her from square one, and even assumes that, just because of how she looks and speaks, she isn’t even going to show up for the cleaning duty, when in fact, she is there and already working before he even gets to the pool. In fact, for a good episode and a half, Tsutsui’s interactions with Igarashi are often based on misconceptions and knee-jerk judgments that he and others make about her.

To give a brief idea of this sort of judgment, Tsutsui asserts the following things about Igarashi: he refers to her as a “girl like her”, immediately followed by a reference to rumors that are spread about her at school; that she is a person with no sense of virtue; that she doesn’t seem like the type of person that would greet him in public; that she’s the kind of person that would flippantly use her looks to get whatever or whomever she wants; that she just goes around dating as many people as she likes with no regard for their feelings; that if she’s bored with him, she’ll just go court some other guy. To top it all off, he even outright accuses her of cheating on him with her doctor within, oh, the first week of them dating. In short, it’s not great, and he’s being, to put it kindly, kind of a dick. It’s a deep, complex character flaw that Tsutsui wrestles with, and to be fair, by the end of the second episode, he’s working to push these preconceptions and judgmental attitudes out of his mind.

Part of this deep-seated judgmentality could stem from Tsutsui kind of just being a jerk in some ways, but it also seems like a lot of it seems to be rooted in his status as an otaku, or at least in the specific way that he has embraced his otaku mentality. Not long into the pool incident where he calls Igarashi virtueless, etc., Tsutsui grumbles quite a bit about “3D girls” and how he just can’t stand them. Even in a conversation that he has with Yuuto, they talk about how they could never fall in love with a real girl, how real girls look down on people like them, and, as Yuuto phrases it, how “people like [him] will never be taken as a partner.” It all comes from a deeply cynical, defeatist perspective, but they are not approaching this from a point of view that does not have any real reason for it.

In truth, Tsutsui and Yuuto’s particular otaku perspectives seem to have been birthed out of the idea that they are looked down upon for simply liking what they like. Tsutsui himself even says that he’s just “doing what I like to do, just like everyone else”, and it does present this idea that there are just certain hobbies, forms of media, etc. that are less acceptable than others because they do not follow the mainstream lines of acceptability. In a way, then, their distrust of people is born out of, in some ways, the cruelty of others. That said, while this makes it easier to see things from their perspective, it does not justify Tsutsui’s reactionary, deeply ill-informed prejudices that he enacts through this.

That being said, it is appallingly ironic that Tsutsui would judge, of all people, Igarashi, or that he would enact any form of judgment on anyone at all, for that matter. Having been the victim of such judgment and knowing the harm that can come from it, you would think that he might have some degree of compassion for her, since it appears that Igarashi has been just as much a victim of others and their prejudices as Tsutsui has been. She is clearly the subject of widespread rumors, since Tsutsui even knew who she was, and given the reactions that her asking Tsutsui out elicits from their class, it is clear that people see her in a massively negative light, despite knowing nothing about her. In that regard, it’s pretty clear to see why the two of them make a good match.

With everything else in mind, Tsutsui does eventually begin to make himself vulnerable and open up to Igarashi, largely because she does not look down on him, and because she does not judge him for liking what he likes. She puts up with a lot of garbage from him early on, as we discussed earlier, and she also stands up for him quite often. Being one that has been the victim of many rumors, harmful judgments, and other such issues, Igarashi makes it a point to stand up for Tsutsui when people speak ill of him, despite not knowing him at all, except for the otaku status he has been branded with. Beyond this, she also comes to his house and asks him to show her his favorite anime, which she ends up liking quite a bit. It is this connection through the show, as well as the simple act of working to see him for who he really is, that helps Tsutsui really begin to break down his walls, brick by brick.

Of course, we’ve talked a great deal about Tsutsui, and Igarashi a good bit by proxy, but Igarashi herself is an enigma of a character thus far, as well. It is clear to us that she seems to be a kind-hearted person that, for whatever reason, has been branded as an easy girl at their school, and who is only paid attention by guys that seem to want to have their way with her. In the first episode, even, she is accosted by two boys who are both asserting that she is dating them, despite her protestations that she is dating neither of them. At this point in time, we do not know why this is the case, or how these guys got to this point of assumption, but it can’t come from anything good. In short, it seems as though Igarashi has found herself in a difficult situation through some unfortunate circumstances beyond her full control. 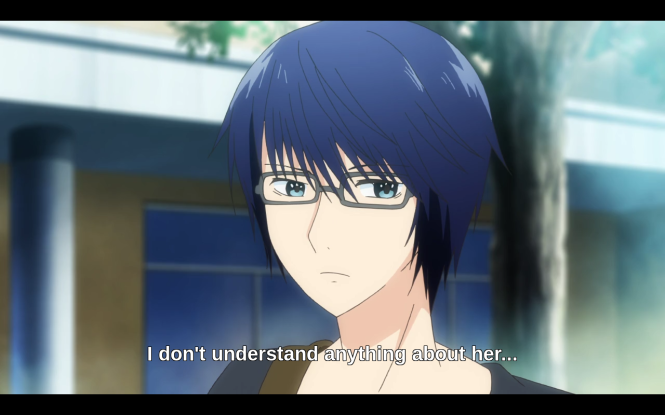 There are other things about Igarashi that also seem…complicated. For instance, in the first episode, there are several instances in which we find Igarashi stripping, or in the process of doing so. The first instance, wherein which she removes her overshirt in front of Tsutsui in order to wring it out and dry it, is completely understandable. But when she is accused of stealing a book later in the episode, she empties her purse to show that she does not have the book, and follows this up by removing her shirt, and starting to fumble with her skirt, as well, looking to also remove it. This, of course, is overkill. It could simply be an odd, trope-y character quirk, but the presence of it is still just odd, given her character presented thus far.

Another issue presented is that around the halfway point of the second episode, when Tsutsui accuses Igarashi of cheating on him with her doctor, she retorts with a line of several decidedly false lies. She tells Tsutsui that the doctor is indeed her boyfriend, and that she views people like Tsutsui as “interesting”. When she looks back at Tsutsui and sees that he has taken all of this as truth from her, however, she looks distressed, and confesses that this was a lie; that the doctor is her family doctor, and that she has a serious illness, which, as she reveals the next day, is also a lie, and that she has asthma, as opposed to something like cancer.

It is interesting to consider why Igarashi would respond in this way – for her reaction to this accusation to be for her to lie about it – but given what we know about her and how similar she seems to be to Tsutsui in their background of societal oppression, it’s not outside of the realm of possibility for us to surmise that it might be some kind of coping mechanism, or some way to try to deflect some of the garbage she’s feeling off of the situation. Regardless, I feel that it is safe to say that she has some good reason for doing it, or at least a reason that we will be able to understand once she opens up more to Tsutsui about her own personal insecurities.

Beyond these interesting explorations of their insecurities, though, 3D Kanojo also works in these first two episodes to try to encapsulate the feeling of excitement that comes from new-found romance. By comparison to other shows within this genre, it is not often that we find a school romantic comedy wherein which the two main leads are actually a couple by the end of the season, let alone by the end of the first episode. Though still somewhat distrustful of the whole situation, Tsutsui genuinely finds himself in a place where he truly has feelings for someone, a “real girl”, even, and he is slowly opening up to it along with Igarashi. Whether it’s him touching her hair simply because he wants to, or her tossing pebbles at his window because she misses him, it’s wonderful to see some sparks of adolescent romance firing off before our eyes. 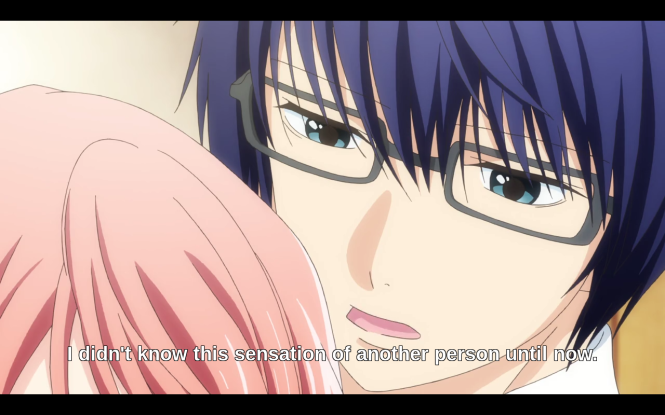 3D Kanojo, on the surface, definitely is a show that we have seen before. But if this introduction to the show serves as any indication, we should be looking far, far below the surface to get any real indication of show itself, and the characters within it. It’s quite clear that 3D Kanojo has a lot of potential to address some genuinely important issues regarding allowing people to follow their passions and live their lives without judgment, and to have a piece that earnestly discusses not judging people without truly knowing them. It’s been an interesting first two episodes, and I have high hopes for where this might go in the season to come.