Author’s Note: Apologies for the lateness of this post.  I’m sure most people have already moved onto to episode five by now of this fantastic show but I was held up with personal issues that couldn’t be helped. To make up for it, I tried to put a lot of effort into this so I hope you all enjoy.  Also, spoilers and such as some stuff goes down in episode four.

Episodes three and four of Just Because! ended up continuing to validate my immediate love for this show.  While the drama and plot aren’t crazy or off the wall, the natural dialogue and slower pace allow me to appreciate all that’s happening for our crew of seniors trudging towards their graduation and murky futures.  Every scene and interaction is chock full of a surprising amount of engagement for a show that relies heavily on realistic drama and humor.  Plus, these characters are just so dang lovable, even when their hearts are breaking from all the pain they give each other.

You know it’s a sad scene when even the dog is frowning.

To start, rather than detail out the events of these two episodes, I wanted to individually look at what made each special to me.  There are numerous things about this series that attracted me from the first episode, (I could boringly go on and on about the sound design) but two major ones that continued to be amazing in episode three were the writing and cinematography.  The writing in particular is just so solid so far.  Not only are conversations very natural while still getting across necessary information about all of our characters and their relationships to each other, but it’s filled with incredibly clever moments.  I specifically enjoy the indirect answers as well as the intentionally incomplete sentences in this show.  Rather than having a call and a direct answer that you would typically see, conversations are filled with questions and lines that are ignored or answered in a roundabout manner, allowing the conversation to progress without having the stop and go of a punchline or an obvious answer.  This seems obvious but it isn’t always something I personally see when watching anime.  This is very similar to natural dialogue and allows for a good flow to each scene.

For example, when Ena Komiya interrupts her other fellow photography classmates and shows off her picture for a photography competition, she tells them, “If you two get some nice shots, enter a competition, ‘kay?”  This is left in the air as we see them smile sadly, already committed to letting the photography club die out.  However, instead of saying this, they instead very quickly change the subject to who the person is in the picture.  Multiple times in this show, we see characters change subjects or ignore statements, oftentimes about their future or the future of the group.  This is a very natural human habit of avoiding difficult topics.  Characters in this show realistically have a moment of pause but then quickly continue the conversation, either around the topic or instead changing to a different one.  It all feels very natural instead of the typical anime flair of drawing the whole scene out by emphasizing an awkward laugh and nervous face all the while missing a beat and finally ending up back on topic after a few seconds.

I also have to complement all the writing that’s in-between the lines.  Several scenes may only have one or two lines if it’s all that’s needed, allowing for body language to tell the story instead.  A comedic example is the scene of Haruto biking to spend some time with his crush, and his friend, Junpei, trying to keep up.  The several successive cuts between these two during the biking scene feel very Edgar Wright as it shows the exhaustion of one versus the determination of the other.  However, the scene doubles as a means to get across just how far Haruto is biking, like a lover hearing that their significant other is home and their parents are gone. 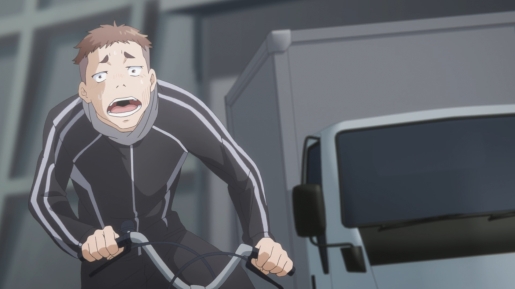 The face of dedication and/or horniness.

A more serious example is when Hatsuki talks about her future goals, saying one line but then showing her true feelings about the future through her more lost and listless expression.  This isn’t just done for the audience’s sake, either.  Expressions are easily picked up on by the other characters in the show rather than weirdly being ignored (cough cough giant anime sweat droplets).  In this case, Hatsuki’s friend, Yoriko, catches her forlorn look and without Hatsuki having to say anything, Yoriko apologizes to her that she can’t seem to think of a way to help Hatsuki out.  There are times when full conversations are done without almost a single piece of dialogue needing to be said and other times when a look or sigh is all the answer another character needs to understand them.  More than the other dialogue, the use of body language is powerful in this show and is able to tell expertly what is going on, both to us and to the other characters.

And then we get to the cinematography, which really helps to tell this story almost on its own at times.  Several shots in this show are very clever in what they’re able to do.  For instance, one that stood out was the goodbye between Eita and Haruto.  Rather than just having both characters in a wide shot say goodbye and walk their separate ways, the animators had some fun.  As Eita and Haruto’s conversation is ending, the sound of a train begins to interrupt them.  We see both characters look top left to watch the train that the sound clues us into.  The camera cuts to a tracking shot of the train moving top left to top right.  However, the pan naturally tracks the train to the right and down where suddenly the train is in the background and our eyes rest on Haruto as he says goodbye directly to the camera, indicating the whole natural pan was Eita’s perspective.

Okay, ignoring the CG train, this is actually a really cool shot.#JustBecause pic.twitter.com/Rzt60J7gNh

The characters needed to say goodbye in order to show how they split for the day as the following scenes have them in two separate places and this was a much better way of doing it than having an awkward wide shot of them saying goodbye to each other.  It seems to scream cleverness in how the pan naturally follows exactly where our eyes would be looking and so guides us to land on Haruko without having to look around the screen for him.  In one smooth move, we went from a pretty background shot to a framed shot of one of the main characters walking off without cutting or having to move our eyes.  And this all just seemed to be the director and animators having fun with a relatively unimportant shot, which had me thinking about how much harder they must try for the shots where it matters. So many scenes in this show exude that same command of the visual language of the medium and I appreciate all it does for the story and quality of the show.

In episode 4, there were small but important elements that continued to jump out at me. Similar to episode two as Tofu had pointed out previously, episode four keeps the texting game going strong, using onscreen text bubbles that track to each character as they’re absorbed in their virtual conversations.  What’s unique in this case, though, is how the anime shows each bubble being written and deleted as the characters hesitate or change their mind in what they want to say.  For instance, when Eita is walking to the shrine, he begins to be bombarded by texts from Ena Komiya, cheering on the romance she called out in episode three to the chagrin of Eita and Mio.  Eita can’t keep up and his responses are buried by her bombardment before he can even send them.

Texting in this show is super clever. Love how the chat bubbles track to the character and show them typing or deleting.#JustBecause pic.twitter.com/T5n2adxMoq

The clever use of modern communication and how stylized it is onscreen is a joy to watch for this show.

However, the biggest idea that deserved praise for this episode were the quiet moments as each pained and expressive face spoke volumes.  As the romances of the two paired couples begin the steady climb to their climaxes, every forlorn expression and telling body language helped to sell the emotion that these characters felt as they found their romances dashed aside by the other who didn’t feel the same way.  Coupling that with the incredibly acted dialogue and some of these moments hit hard on their delivery.  One of the best examples is easily Mio Natsumi literally lying through her teeth with a pained expression that obviously tells even she can’t believe her own words anymore. 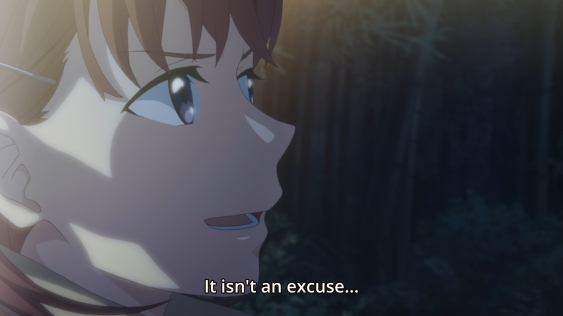 This expression along with the clear pain in her voice was darkly satisfying to watch as the tension builds up in the scene to Mio finally admitting her own feelings for Haruto out loud, pushing Eita away in the process.  And she wasn’t the only one.  Even when Eita was about to burst with a fist balled hard enough to make Arther proud, his expression changes from anger to shock to hurt as he pushes his emotions to the side as best he can before he admits to Mio his own feelings for her and hurts her more.  Add Haruto’s face on the verge of crying and Hatsuki’s emotionless eyes as she turns him down and this whole episode had some great feels.  And we’re not even to the halfway point of this show.

All of the ideas from these two episodes and the show at large culminate to make for a thoroughly enjoyable show that’s able to tell so much, often without a character having to say a single thing.  As far as romances go, this is shaping up to be a personal favorite of mine but we’ll have to see.

7 thoughts on “Just Because! Episodes 3 + 4 – Writing Between the Lines”