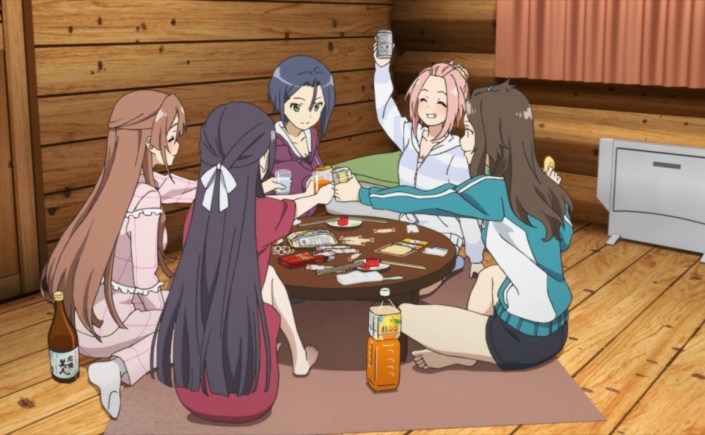 As the Spring 2017 season comes to a close, Sakura Quest continues through into the Summer season, I could not be more pleased with any other shows this season getting this chance. As the spiritual successor to P.A. Works’ prior working shows Hanasaku Iroha and Shirobako, it feels pretty strongly as though it is living up to that legacy, with a stunning cast of characters and the endearing town of Manoyama. While I love the journey that the show has taken us on thus far, something that has really struck me about the show is its treatment of employment in urban and rural spheres, and how an unstable job market and idealized perceptions of the city and the country affect these employment opportunities. Yoshino’s perspective initially is quite simple: she was, by all accounts, born and raised in a rural town, and as soon as she could, she shot off to Tokyo, the land of big dreams, in search of that certain something that rural towns just couldn’t quite do. Even at the risk of not having a job, Yoshino is of the mind that she will never go back to her hometown, even if she were to have a stable, guaranteed job there. The country just doesn’t have the same spark as the city, or there aren’t the kind of job opportunities that someone like Yoshino in her generation would want to take on for a career. In many ways, these ideas that Yoshino has, as well as being a student fresh out of college that can’t seem to find a job for the life of her, speak to me as a reflection of a several-years-younger General Tofu.

We have so many shows that seem to center around youth doing these incredible things, whether they be in a school, or in some job post-schooling, in an urban environment. Many shows such as Shirobako, New Game!, Servant x Service, and others portray this very idyllic view of city life for those in the workforce, showing off all of the wacky and wonderful things that can go on in the city. This is not necessarily a bad thing, nor is it incorrect – simply by nature of cities being these large centers of commerce, there is quite a lot of variety in these city centers. For many, these cities are also large centers of employment, and as such, these portrayals of a dream city life job is not out of reach. However, it is, as is the nature of shows like this, very much romanticized.

Home? No. The countryside? See you in a few scenes.

For Yoshino, this is very much the case. She is infatuated with the idea of Tokyo and the city being these places where anyone can make their dreams come true – where anyone with a degree can apply around, get a job, and lead a happy city life. However, after applying for a good thirty positions without any luck, Yoshino finds that the big city might not exactly be a catch-all of opportunity – that even though she has the moxie to strike out and aggressively apply for any position that she can, it does not mean that she is going to be one of those happy few of her generation that are able to achieve this.

This is not to say, however, that rural areas are going to be chock-full of jobs, either. The only reason that Yoshino got the job she did in the first place was by a stroke of luck that the opportunity to be the Queen of Manoyama presented itself to her. Had she for some reason simply searched around small towns for job opportunities, Yosino would have likely come up as empty-handed as she did in Tokyo. The fact that Sakura Quest makes this so clear, that the reality for many is that you have to follow these opportunities as they arise, is one part of this show that hit me the hardest, as it hits quite close to home.

Without going into an intense amount of detail, I was born and raised in a urban-esque area of the state of West Virginia, which is situated in middle Appalachia, a region in the Eastern United States known for the Appalachian Mountain Range and the hardy people that live in these parts. For many folks in the area I lived in, industrial manufacturing and coal mining had been a gainful means of employment, as well as a way of life, for generations. This was a reality not just in cities in the state, but especially so for more rural areas deep in the mountains. Entire towns would crop up around coal mining operations, essentially forming cultural centers for the region. In recent decades, however, both coal and manufacturing jobs have left the area in staggering numbers. Once-thriving mountain towns are now ghost towns, or if not that, at least shells of their former selves. Even some cities that used to be centers of industry through manufacturing plants have fallen on hard times. In both the country and the city, jobs are difficult to come by. Because of this, many youths here have become disillusioned with the small towns they grew up with, or become jaded to the cities that they once called home. Jobs still exist, but you have to be willing to take the opportunities that present themselves. For myself, this was largely the case, and I ended up moving from the city, and out of state to a small town elsewhere in order to follow a job opportunity. In this sense, I really found myself identifying with Yoshino, and I have many other friends that have left the area simply to follow these opportunities where they led.

DO your job opportunities overflow like a robotically-filled cup of tea?

Sakura Quest does a fantastic job of demonstrating this and the frustrations that come with it. Much like Yoshino, I did not initially want to move to the middle of nowhere, even if it was going to net me a pretty solid job. As time went on, though, I came to love my new home and the weirdness that comes with it, despite its flaws. This is one other major area that I believe Sakura Quest hones in on in a big way: making home where you are, not necessarily where you want it to be. For Yoshino, Manoyama is initially just a job site that she has to be at temporarily – it is a pit stop on the way to her Tokyo career. As she gets to better know Manoyama and its people, however, she finds that following this opportunity has led her to a place that she is slowly coming to love and appreciate. Though it is, in a sense, still for her job, she has taken a vested interest in the town, its culture, and its history. Had she not taken the time and opportunity to work in Manoyama, Yoshino would not have discovered the deep history of the town’s wood-carving artisans, or the town’s traditional dance that has been passed down for generations, or just the town’s natural beauty in general. It is certainly not the flashing neon lights and the technological hustle and bustle that she expected from Tokyo, but it is quite clear that Yoshino has, bit by bit, come to love the small town of Manoyama, a situation that episode 1 Yoshino would have never thought even remotely possible. 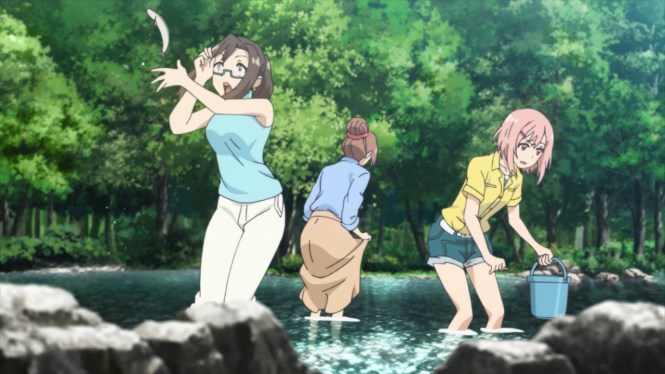 This is not a change that just comes on by Yoshino simply living in Manoyama, however. It is not as though she stayed there a few nights and magically came away with an appreciation for the town; her coming to feel more comfortable with Manoyama was a conscious choice, and it took work to get to that point. Her discovery of the deep history of Manoyama’s wood carving came from massive amounts of research, much of which was through simply talking to people about the craft, and getting to know about it from the locals. She sought out more information about these facets of the town, and she came back with a greater appreciation for them.

We can’t all be queens.

Had I stuck around in the place I had called home for years, I might have found a steady job there. However, I might not have, either. The same could possibly be said for Yoshino. Perhaps her fiftieth job application might have brought about results and set her on the path to her city life that she dreamed of. In the end, however, she took a chance and an opportunity, and luckily for her, that choice paid off. Not all of those opportunities do; in the current job market, it is difficult to say with certainty how these things might turn out. When it comes down to it, Sakura Quest, beyond being just a solid, comfy country anime time with working girls doing working things, has reinforced in me the idea that sometimes you have to just take that leap, even if it might not initially be that shiny, glimmering idea you had in your head. Home is where you make it, and that place might not be at all where you expected.

5 thoughts on “Country Roads, Take Me Home – Sakura Quest and Making Home Where You Are”