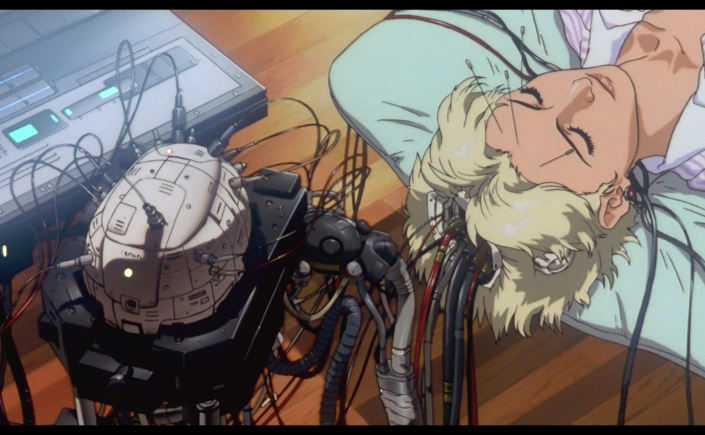 Cyborgs have always been an interest of mine. The idea of machine and human integration in various forms for human advancement fascinates me – as such, I love a good cyberpunk or sci-fi show centered around this idea and the moral and ethical discussions that arise from such human alterations. Heck, I even based some of my graduate studies writing on the exploration of various kinds of human/machine integration, using bits of Production I.G.’s dystopian cyberpunk crime thriller Psycho-Pass (2012). Somehow, with all of those boxes checked off, it occurred to me recently that I had never sat down and watched Ghost in the Shell (1995), which just so happens to be another science-fiction futuristic police drama anime by Production I.G. (and the film progenitor of an insanely popular franchise worldwide), and I figured it was high time I corrected that.

Ghost in the Shell reminded me a great deal of Psycho-Pass. The ways in which each of the two works depict crime prevention and the methods used therein is fascinating; the former’s bodily augmentations from Section 9 and the latter’s lack of such augmentations in favor of the Sibyl System and the Dominators presents an interesting contrast in the ways that these two futuristic societies have opted to dispense justice. However, likely because I had gone into the movie with a mindset thinking about cyborg identities and my previous writings, what was more interesting to me was the way in which both works presented cyborgs in their worlds, despite taking place roughly a century apart from one another (2029 for GitS, undefined year in the 22nd century for Psycho-Pass).

In the world of Ghost in the Shell, to be a cyborg means to be at least partially, if not fully, “cyberized,” meaning that a person’s body has been augmented with cybernetic parts and prostheses, resulting in varying degrees of physical integration of flesh and machine. Cyborg enhancements are not uncommon in this world, and on the surface, they are not always obvious; their visibility can range from being fairly prominent, such as Batou’s clearly prosthetic eyes, to being nearly undetectable, such as Makoto’s full-cyberized body, which only shows through on account of wire jacks in the back of her neck.

I would probably look a little miffed if I had wires jacked into my neck, too.

Despite taking place on an Earth that is about a century ahead of its predecessor, the world of Psycho-Pass features fairly few cyborgs in the way that Ghost in the Shell defines and presents the cyborg. The character who would most align with this flesh-and-machine hybrid category of cyborg is Toyohisa Senguji, the Chairman of the Teito Network Construction Corporation, and a minor villain in the series. In a fashion similar to that of Ghost in the Shell’s Makoto, Senguji has undergone the process of becoming almost completely cyberized; the only parts of him that are not cybernetic prostheses are his brain and spinal cord, and the only reason he has not altered those parts of himself is because the technology to do so does not exist at the time. 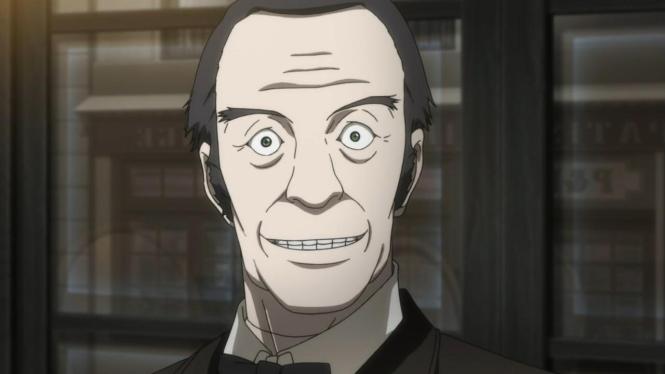 You can’t tell me you don’t want to protect that smile.

Interestingly enough, when being interviewed about his status as a cyborg, Senguji posits another consideration of what it means to be one. The world of Psycho-Pass is one filled with vast amounts of advanced technology – intelligent, holographic personal assistants, compacts which can change your clothing’s appearance on a whim, and even highly advanced PDAs which for some serve almost as auxiliary brains. These futuristic conveniences and numerous others represent enormous advances in technology that allow citizens to, in a way, augment themselves through the use of external devices instead of physical, bodily modifications. Beyond that, they are resources that nearly everyone in their society uses. Senguji pursues this line of thinking when he asks the interviewer what she would do if all of the information on all of her devices was lost. Her answer is fairly straightforward and comes almost without hesitation: she would not be able to work or do almost anything until the systems and information were restored to their previous state. With this in mind, Senguji suggests that everyone who depends on these technologies are also cyborgs. Specifically, he states:

When you entrust so much of your everyday life to those electronic devices, the argument that you aren’t a cyborg isn’t very convincing. To you, those portable terminals are already your second brain [. . .] It can be said that the history of science is a history of the expansion of the human body’s functionality, in other words, the history of man’s cyberization. It is all a matter of degree.

When you get down to it, it can be pretty difficult to dispute what he is saying. The traditional definition of the cyborg is a fusion of sorts between man and machine; with that in mind, if people in Senguji’s society are using their technologies as auxiliary brains, or as tools that are completely necessary for them to be able to function “regularly,” that sort of reliance on machines could also be viewed as a state of being that is analogous to that of a cyborg. It is because of this that I feel that this perspective that Psycho-Pass offers is better suited to Posthuman theorist Katherine Hayles’ definition of a cyborg. In her book How We Became Posthuman, Hayles explains that the cyborg exists as a being that can tear down or complicate traditional boundaries (How We Became Posthuman 84). So essentially, where the traditional boundary of man and machine exists, the almost symbiotic relationship that the citizens in this world of Psycho-Pass have with their technologies does seem to blur the line between that boundary. You still get a cyborg, but it is more of what one might call a conceptual cyborg – more of a focus on the functionality of the cyborg, and less on the traditional physicality of one. If you get really into the nitty-gritty of it, you could even argue that in our own technologically developed societies, we are not far from that state of symbiosis with technology, either, when we have the compulsive checking of our social media feeds, or people having “phone separation anxiety” (nomophobia, if you want to get technical).

So if I called myself a (conceptual) cyborg, I wouldn’t look like this if my head exploded. No wires, all guts, still cyborg.

With this idea of Hayles’ cyborg in mind, it’s interesting to me that Ghost in the Shell and Psycho-Pass present these very different views of the cyborg – the flesh and machine cyborgs, and the conceptual cyborgs. Perhaps, however, we might chalk it up to each depiction of the cyborg being somewhat a product of their times. Although the film adaptation of Ghost in the Shell was released in 1995, the source manga was published beginning in 1989, back when the idea of the cyborg was Arnold Schwarzenegger as the Terminator or Peter Weller as Robocop, and cell phones were just beginning to be produced as phones you could fit in a jacket pocket, as opposed to bricks with battery packs. To people of the late 80s and the early 90s, some of our technology today might as well have been future technology. (If you showed someone then a smartphone or tablet computer from today, they would probably also ask you if you were waiting for Scotty to beam you back up to the Starship Enterprise.) Our image of the future was quite different then than it was now. It’s 2017 – only about 9 years away from Ghost in the Shell – and I don’t quite see mass, commercialized cybernetic implants on the market yet. It makes sense, then, that Psycho-Pass, produced almost two decades after Ghost in the Shell,  would be different in its representation of the cyborg and the interaction between man and technology.

We aren’t quite at this level of technology yet.

The flesh and machine cyborg is certainly not an image that is leaving popular culture any time soon. The Ghost in the Shell franchise itself saw numerous additions via GitS Arise in the last few years, and even Stateside, it has been adapted into a Hollywood film. We even got a Terminator sequel in recent memory, as well, though whether or not that was a move of desperation or a play into the love of future cyber-tech is debatable. With these and more in mind, however, the flesh and machine cyborg is still just a figment of science-fiction; full-body cyberization is certainly not upon us yet. So are those of us all diddling around with our phones and computers cyborgs? In some ways, it is definitely difficult to determine where our mixing with technology begins and ends, so it’s entirely possible. But, all things considered, it depends on your perspective.

(ZeroReq011 has an awesome piece about the interview with Senguji and the ramification of Senguji’s suggestions on his blog, so check it out if this interests you.)

Hayles, Katherine. How We Became Posthuman. The University of Chicago Press, 1999.

7 thoughts on “Are We a Generation of Cyborgs? Cyborg Identities in Ghost in the Shell and Psycho-Pass”