It’s an often used statement to say that everything that can be invented already has been. To an extent, I feel that this is true.  There’s been a lot of history of mankind to contend against if you want to invent a new idea.  Specifically for creative fields like writing, films, and different forms of media, this can definitely feel like it’s the case, especially these days when we’re getting remakes of remakes all the time from Hollywood and television. (Did we really need another Fantastic Four?  I mean, the first one was alright but that last one was just horrifying.)

However, even if a plot or setting has been done before, that doesn’t mean that we can’t find new and creative ways of working with those ideas.  Iterating or innovating on an idea can be as

great a show of genius or craft as creating something entirely new.  A famous example of this is The Lion King, which borrows heavily from Hamlet both in plot and characters, but you’d never hear someone complain that it’s just a rehash of the same thing.  Both Disney’s animated classic and Shakespeare’s wonderful play may share a lot in common but both also are able to stand on their own as great and incredibly entertaining works.

Another great example that not many may know is a film called 10 Things I Hate About You. A story about a boy (Cameron) who wants to date a girl (Bianca) but only can if the girl’s older and “shrewish” sister can also find a date.  So Cameron gets a bad boy of the school to woo the older sister for him and allow Cameron to date Bianca.  The story may sound familiar because

it’s Shakespeare again with the play The Taming of the Shrew, though this time, less misogynistic.  Watching these back-to-back, you can easily see similarities between the two and a lot of borrowing on the part of the former from the latter, but the stories are not the same and the telling of 10 Things gives something new and fresh for the audience to enjoy.  And that’s really the big thing.  It doesn’t necessarily matter if “it’s been done before”, but more so “how a story or idea is being told”.  Which leads me to one of my favorite anime of all time:  Nichijou.

Originally a very funny manga, the show Nichijou in Japanese means roughly “My Ordinary Life”, which is the biggest misnomer I’ve heard in a very long time.  The idea behind this show is to humorously depict everyday situations we find ourselves in and crank them up to eleven.

Turn that shit up! We’re just getting started!

For this show, this could mean quite literally anything.  For instance, take one of the first jokes of the show.  Yukko, eating her lunch, saves the best part for last in the hot dog she brought from home.  As is the classical setup, Yukko is so excited to have this delicious hot dog, that she moves her arm and accidentally drops the dog, causing it to fall in slow motion.

This resulting scene starts very simply with something we’ve all probably encountered before:  Accidentally dropping food.  We can find humor in this by itself, but Nichijou is usually never content with just replaying a simple joke.  If it’s going to do a punchline, it’s going to innovate on it by blasting us with hyperbole.  The scene ramps up very quickly with Yukko turning super saiyan, the hot dog flying across the room, and even a couple of close calls of being caught until finally, after the hot dog touches the floor, Yukko tries to play it off with the three second rule.  The visual comedy is incredibly compelling and the whole scene is well-timed which leads me to my main point:  With this being an animated comedy show filled with gags and skits, a comparison can be made to Looney Tunes and, in fact, Nichijou may be inspired heavily by the great comedy shows of the past to become its own modern day comedy classic.

Looney Tunes, as I’m sure we all know, is an animated comedy that is one of the original skit and gag comedy shows for the animated medium.  While cartoons had come before it, Looney Tunes I’d argue definitively perfected the form, particularly the basis for most visual comedy jokes.  If

you’ve ever seen an episode, you can probably easily tell the structure of the joke:  Assumption and then reality.  When Wile E. Coyote sets up a trap, we have our “assumption” on how the trap will work.  The “reality” is when The Roadrunner comes by and suddenly the trap inexplicably backfires.  Wile E. pushes a boulder off a cliff to smash The Roadrunner, and then the boulder rolls up the adjacent cliff to come back and smash him instead.  A lot of the comedy in Looney Tunes plays out this way and it forms the basis for most gags in the show.

Similarly, much of Nichijou’s gags follow a very similar setup.  Take for instance this page from the manga. (If unfamiliar with manga, read right to left.)

The initial setup is someone driving down the road.  As they drive, we see someone holding a sign.  The assumption may be a hitchhiker or a construction worker.  As the driver gets closer, the sign becomes visible and states “Round 1”.  Confused, by the sign, the driver suddenly sees a martial artist who fights the driver’s car.  The assumption that’s set up in this example is that the person along the road was a hitchhiker or a road safety person.  The reality is that they’re a sign holder for a martial arts match with the driver’s car.

Looney Tunes and Nichijou both excel at this style of visual comedy because they both know exactly what to do to bring up an assumption and then immediately squash it, wonderfully. To show an example from the actual show, here is another visual gag from Nichijou in which Yukko continues to have a bad day by finding herself in embarrassing situations, something I think we all can relate to in “everyday life”.

If compared back-to-back, it’s evident that Nichijou and Looney Tunes both play off of our assumptions about how reality works, and then go against these same assumptions.

Another aspect borrowed from Looney Tunes is the sense of character when it comes to each gag.  There is always a sense of who these characters are, and the character never deviates from this, forming the basis for each joke.  Daffy, in his lust for glory, will always start a fight.

However, because of his lack of muscle or ability, he will always lose the fight.  From this, he can play off of another character like Bugs Bunny well, as Bugs is the opposite:  Being carefree, he will never start a fight, but because of his cleverness, he will always win one.  The humor derives from Daffy’s constant wanting to beat Bugs with Bugs’ inevitable reversal.  Because our characters are known and because their wants are clearly defined, the comedy is easily seen in any situation these two are in.

This same idea applies to the characters from Nichijou.  Nano, for instance, is a robot that wants to be normal.  However, because her creator doesn’t want this and because of her very nature of being a robot, she continues to be robbed of her normality by other characters playing tricks on her, exposing her as a robot to her chagrin.  Another example is the talking cat,

Sakamoto.  Sakamoto always attempts to behave dignified and mature.  However, because he is a cat by nature, as much as he fights it, he always gives in to the simple pleasures of a cat, like playing with toys, causing himself to become embarrassed and lose his dignity.  Simple characterization like this enables skits and gags to play with the character’s behavior in mind, allowing us to laugh at the character’s various reactions to absurd situations.  As Nichijou goes on, it never loses its characterization and each character behaves uniquely and wonderfully throughout, with each one having a role to play.  This is definitely one of the strong points of this show as it is for Looney Tunes.

However, while both shows use a lot of absurd humor and characterization, the major difference between the two is how grounded in reality their worlds are.  For Looney Tunes, its style is famous for its zany humor about predominantly anthropomorphic animals stretching and morphing in weird but hilarious ways.  This is one of its strong suits.  Looney Tunes’

animators knew how a human or animal moves and behaves, but added onto this by stretching them slightly farther than they normally would to emphasize an action, or even morphing parts of their bodies when they’re hit or struck.  This is one of those elements of old style animation that can still be found in the animation of movement today, speaking to the legacy of Looney Tunes and other animation of old such as classic Disney.

This is different from Nichijou’s style and ideas.  While Nichijou has the capacity to be wacky and to morph and stretch its characters, it reserves itself to an extent in order to ground itself more closely to “everyday life”.  As stated before, the idea behind Nichijou is to take the everyday concepts and situations that we find ourselves in, and then hyperbolize these situations, drawing humor from the absurd squashing of our assumptions.  So while the animation can become ridiculous or zany, it reserves itself first in order to draw more attention to the times when characters do stretch and morph, undermining what our concepts are for the reality these characters exist in.

I’d argue that neither approach (wacky and zany all the time, or more initially reserved to emphasize hyperbole) is better than the other, but that each approach is just a different way to get us to laugh and smile.  Ultimately, that’s what matters too.  Both shows succeed in what they do because they do it well, and while Nichijou definitely borrows many an inspiration from older animation, it’s a fresh and entirely innovative work on its own.  Nichijou doesn’t reinvent the wheel, but it has found a new way to use it that makes itself unique and special, while wearing its inspiration openly. 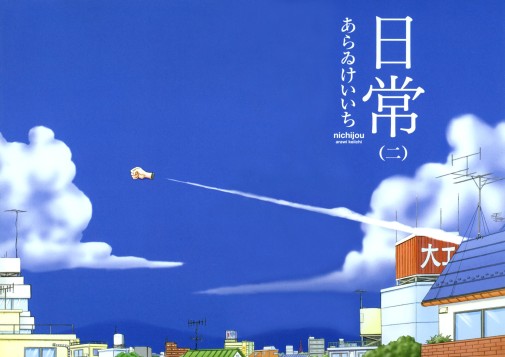 One of my favorite scenes from Nichijou because it speaks to closely to my own experiences going to the fifty completely different coffee shops near my home.

Research and Inspiration for this Discussion:

One thought on “Nichijou – A Modern Day Looney Tunes”