Here at the Backloggers in light of the recent tragedy with Kyoto Animation, we wanted to express our love towards the studio, the staff, and their works by sharing some of our favorite experiences with Kyoto Animation productions. All of us here truly value their work in our own ways, and I hope that our thoughts below can give you some insight as to how we truly feel about this incident as a whole by showing you how much we value Kyoto Animation as a studio and the staff that created some of these memorable works that we love so dearly.

END_OF_DOCUMENT_TOKEN_TO_BE_REPLACED 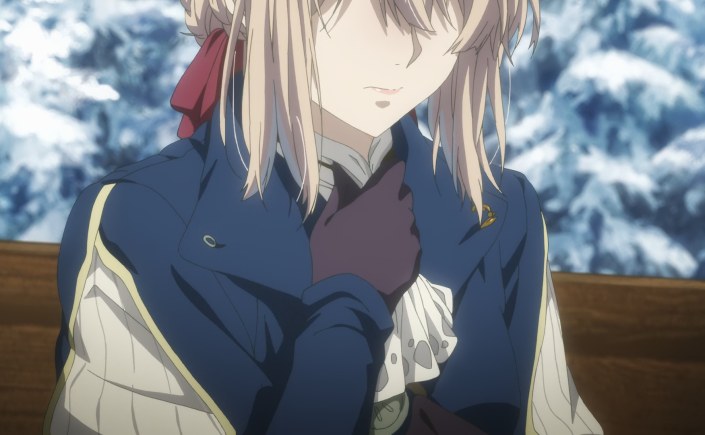 Violet Evergarden continues to surprise me on several different levels, pulling out some of the biggest emotional gut-punches that I’ve seen from a single anime in a while. While other anime of Winter 2018 such as A Place Further Than the Universe have also had some huge emotional moments, I think Violet Evergarden has one over every show of the season, especially with some of the previous episodes and how they’ve ended. The show is still far from perfect though, and while I still love the show dearly, it’s obvious where some of its problems lie within these two episodes.

END_OF_DOCUMENT_TOKEN_TO_BE_REPLACED

Violet Evergarden is one of these shows that I feel at odds with when trying to discuss, as I feel while there’s so many good things to say about the series and how much I enjoy it and what it does, there’s an equal amount of criticisms I have for the show, yet it never detracts from my enjoyment of the show as I’m watching. It’s a complicated feeling for me, as I do deeply enjoy the show, but at the same time, cannot bring myself to call the show anything more than “good” as I’m watching it. I feel there’s plenty more the series could do with itself than the story is showing me at this moment. “Why is that?” is always what I ask myself in these scenarios, and I think episodes 5 and 6 are perfect to discuss why I both love this series and also feel like it could improve upon itself.

END_OF_DOCUMENT_TOKEN_TO_BE_REPLACED

Out of many great films that have been released in the past 2 years, A Silent Voice was one that I was probably the most excited to see, as the manga had been something I’ve heard about off-and-on for a while. I would also never pass up an opportunity to see a Kyoto Animation (KyoAni) work in theaters, as their style remains consistent, but are always continuing to build on what they’ve learned with their previous works.

One of the staple aspects of KyoAni and Naoka Yamada, the director of A Silent Voice, is the fact that subtlety is largely implemented in the stories of their films and it becomes a story told through the animation alongside the actual written story. While I won’t say that A Silent Voice is a narrative in the same vein as works such as K-ON! or Tamako Love Story (also both directed by her), the subtle nuances of the characters are absolutely there and are something to be appreciated throughout the film.

END_OF_DOCUMENT_TOKEN_TO_BE_REPLACED

In this episode, we talk about Kyoukai no Kanata and how Kyoto Animation used this anime to push their abilities to the limits.

END_OF_DOCUMENT_TOKEN_TO_BE_REPLACED

Log Time is the podcast of The Backloggers where we talk about anime, manga, light novels, and anime version of John Wilkes Booth.

In this episode, Owningmatt and Mythos discuss rebooting old series, The Melancholy of Haruhi Suzumiya and the differences between the novels and the anime, and Kantai Collections’ invisible admirals.

Thanks Krista (keytajoy) for making our Logo for this week’s Log Time!

Log Time is the podcast of The Backloggers where we talk about anime, manga, light novels, and randomly divulge into jokes about taking potato chips and eating them.

In this episode, Owningmatt and Mythos talk about their thoughts and feelings on the Spring 2015 anime season as well as how to use plot devices and what is this generation’s introductory anime.

Also, due to Owningmatt’s nervous habit of clicking pens, clicky pens are now banned from the podcast.