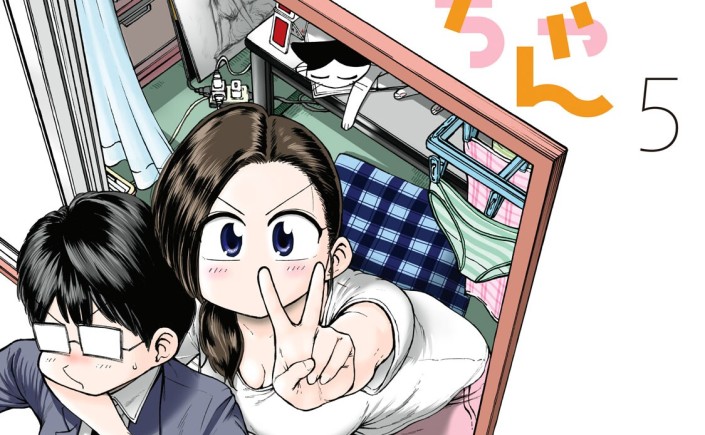 This manga is this perfect little cap off to the day for me.  Mado Kara Madoka-chan is a cute little series about a office worker who walks the same path to work every day outside of a woman’s house, who loves to play games and roleplay with him as he passes by.  Every time that our protagonist comes by, Madoka-chan begins a different kind of game with him to keep both of their lives fun, dramatically changing the layout and look of her home.

Each chapter is a different strange experience with the eccentric Madoka-chan  as she performs something within her four walls either for the salaryman passing by, or seemingly to entertain herself. However, her eccentric nature and the dramatic transformations of her place, sometimes in a matter of minutes, makes me feel as if there’s a hint of Magical Realism in this series. Like, there are some chapters where she closes her shutters and not five seconds later, they slam back open to reveal a restaurant. It’s insane but also always fun, especially because as magical as she may seem, Madoka-chan doesn’t always get everything right and so interactions between the two characters can become dynamic and sometimes downright hilarious.

It also adds to the character’s peculiarity that she never speaks, and in fact, is never drawn with a mouth.  Rather, while she does act and behave as if she has one, she chooses to solely communicate to the salaryman through gestures and body language.  However, given how expressive she can be, her intentions are never really misread, instead adding to her strangeness by how clearly she’s understood, even with no visible mouth for us to see.

Mado Kara Madoka-chan seems, at its heart, to take pleasures in the smaller moments in life.  What could have been a boring and redundant trudge to work either way is given a refreshing change by allowing our main characters to stop and smell the roses, or start up kick-boxing.  You know, whatever Madoka-chan’s up to that day.

It’s very much the idea of enjoying the simpler pleasures to take away the stress of the day.  To laugh, to play, and also to just be there for someone, even if they don’t say anything… because they literally have no mouth.

This series is not necessarily deep, nor is it trying to be and that’s what I appreciate out of it.  Similar to what Madoka-chan brings to this salarman after a stressful day, it seems this series is intended to be a bit of levity, a small break in an otherwise tiring day.  And sometimes, that’s just exactly what I need.

Unfortunately, I haven’t found an official translation of this one and I can’t seem to find a good place to buy it just yet.  However, this one definitely feels like a sleeper hit to me so to all you wonderful people in the future, if this ever gets licensed, please comment down below and let us all know!  And for those that wanna read it, it’s very easy to find in the usual places.