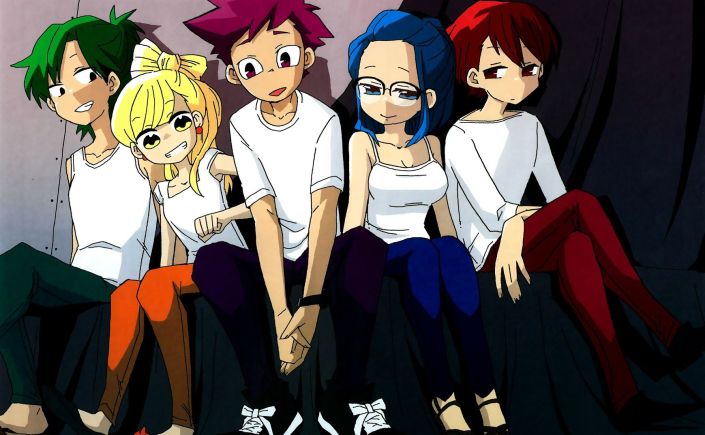 Mousou Telepathy is a story that takes a look at what having a super power most consider cool would really be like of it came with no off button.  Ayako Nakano is a student in high school who ever since she could remember has been able to see other people’s thoughts. However, after being called creepy by her mother when she was very little, she’s always kept this to herself.  Unfortunately, this becomes harder to hide when a seemingly stoic popular boy in her class with a very overactive imagination falls madly in love with her, constantly thinking about her throughout the school day.

This 4-koma starts off with this basic premise, primarily being a slice of life comedy, but then begins to quickly switch gears and also add a lot of interesting drama as well as twists and turns along the way.

Okay, first things first, I absolutely have to talk about the main visual idea of this manga.  The author’s use of color to identify the real world from the mental one is just amazing.  It reminds me of the use Technicolor in The Wizard of Oz to denote the difference between the “real” world of Kansas from the magical world of Oz.  However, the way that it’s used in the manga is so freaking clever. Initially, the mental images and thoughts are overlayed on top of what is actually happening in the 4-koma (and in a lot of unique and diverse ways even when doing the same joke).  However, as the story continues, the mangaka begins to blend the two together in various ways that I enjoyed immensely.

For instance, when Aya-chan goes to a festival with her friends and finds herself lost in the crowds, her power causes her to be overwhelmed by the sheer amount of thoughts that she’s picking up from people.  The colored speech bubbles literally sit on top of her own thoughts and visually drown out her own self on the page.

There is also a section in which (mild spoiler) Aya-chan starts to believe that maybe her ability to read minds is actually just a grand delusion, which would mean her only confidant in the series that knows about it may also have been made up by her delusional state.  This existential crisis is shown visually with suddenly everything on the page being colored except Aya herself, showing her internal struggle of now believing her whole world to be a lie, with almost nothing black and white on the panel to cling onto as real.

On top of this, there are full pages and chapters that are fully colored, indicating that these are the thoughts and daydreams of certain characters in the story.  All of this is such a clever use of a simple device in various ways to visually allow the reader to feel and see the emotional state of our protagonist as well as other people through her mind reading.  I enjoyed this a lot.

I also appreciate that as the series progresses, not only do side characters get a lot of development on top of the main characters, but there are clear signs of these individuals maturing, especially with how they start to understand their various relationships and learn to be better.  The story also does a great job of having these various love polygons that occur in the story but still making them believable for the most part, with a lot of smart resolutions for many of the various relationships in the story.

To be honest, though, I’m torn.  While I’m very impressed with the use of color and panel layout as well as happy with how the story overall plays out, I’m not a fan of the basis for this series being this constant accidental sexual harassment of a girl by this imaginative boy.  While it’s understandable that young teens of any gender may start to have thoughts along these lines, and usually we aren’t privy to each other’s weird mental tangents, it’s this conceit of drawing humor from our female protagonist constantly feeling awkward and weirded out by the onslaught of someone else’s perverted thoughts that she’s able to see that’s just… skeevy.  Even after a twist later in the series attempts to rectify this, it still comes off as skeevy when thinking about the author making this the basis for the story.

To be fair, I feel like the author definitely graduates from the worst of this as the series goes on but I’ve been cherry-picking my choice of images for this post to mostly be later pages in the story.

However, that’s another reason I wanted to pick this series.  Compared to most of the manga I’ve talked about in this Picks of the Month series, they’ve all been ones I could barely say anything bad about.  However, while I like to talk about positive media, (and most likely will still primarily want to talk about the series I enjoy) I also want to point out series that may be doing some things right and other things wrong.  Problematic ones. I feel that it is possible to enjoy various media while also understanding their flaws and critiquing that. So a lotta good here but also some bad that muddies it.

I would say for Mousou Telepathy, though, if you can push through the more ecchi moments you’ll actually find a fun slow-build love story with a very clever use of the manga medium.  That said, it may be a lot to ask to look past the issues that derive from the set up of this story. So this one’s down to your own discretion. I’m having fun reading it but I’m also trying to fully keep in mind these issues while reading and not excuse them away.

As far as where Mousou Telepathy can be found, it looks like this series was originally done online (I believe as a Twitter manga).  So, unfortunately, I don’t think it’s been picked up for licensing in other languages and I’ve yet to be able to track down an officially translated source.  Please let me know if you find a licensed source and comment below for everybody!

If you can read Japanese, the artist has their own site here, a free compiled version the author put up is found here, the author can be found on Twitter, and for those who just want to read it online in English, you can find it in the usual places.

One thought on “Picks of the Month – Mousou Telepathy”