If there’s nothing else that should be taken from this article, the tl;dr of all of this is:

Just because I know the destination and can name all the stops along the way doesn’t mean I can’t enjoy the ride, especially when the train is this freaking jazzed up.

Megalo Box is a reimagining Ashita no Joe, taking its classic story of the underdog boxer and setting it in a near future version of Japan where the rich live in a beautiful utopia while the poor exist in sprawling slums outside the city and aren’t even considered citizens.  Junk Dog, our Joe of this series, makes a living convincingly losing matches to payback his coach’s debts to a crime lord. We see him battered and bruised, sick of this life but stuck without a way to make things better, especially given that as part of the poor class, he’s unable to get a citizen’s license, meaning he’s not even considered a citizen of this world.  He spends his days recklessly driving until he accidentally almost runs over the head of a large corporation who is in charge of a new league of boxing sport called Megalonia. Junk Dog, due to his love of old fashioned Megalo Boxing, hates the ideas behind Megalonia and tells off this business woman, causing her prized boxer and devotee, Yuuri, to almost fight him before he is called off.  Because Yuuri is still upset about this, he later gets a match with Junk Dog in the illegal boxing ring Dog calls home and defeats him brutally. Junk Dog wants a rematch immediately but Yuuri says he will only fight him again if he can fight him in his own Megalonia ring. This kickstarts the journey of Junk Dog to get into Megalonia and get his revenge on Yuuri.

As far as these first two episodes go, from just the first few minutes of this show, I could tell you how many scenes were going to play out.  From Junk Dog’s reckless and restless behavior finally brimming to the surface and having him win a match he was supposed to lose, to his inevitable loss to Yuuri and want to do anything to defeat him and prove himself.  We’ve seen this story so many times. Hajime no Ippo and even the very basic story of Little Mac in the Punch-Out! series of games had this same setup.  Hell, Rocky has been doing this for decades that it was the first thing I thought of when I saw this show.  However, that’s not really the point. Even if the setup and breakdown of each episode may be known, I never found myself bored or tired of the story simply because of how it’s told.

Every shot bleeds style and substance while also showing more and more of this interesting world and fun characters.  Each scene has plenty of world-building unto itself, with setup shots of the desert and outskirts showing the forgotten people outside the city easily detailing to the audience the disparity of the living situations of the poor and wealthy.  Junk Dog rubbing his hands against the walls of the corridor on the way to the ring and seeing the dried blood rub off of hundreds of fighters that had come before him and lost told me so much about what type of illegal fighting he was about to do, even before we see him enter the ring.  The sheer detail of each drawn piece of this world is beautiful in its grittiness and style.

Adding to this is one of the strongest and most varied soundtracks I’ve heard in a long while.  It seems like almost every track on this soundtrack could have been a contender for OP/ED status and even though it can switch from rap to hip hop to EDM to blues, it’s never jarring and each song fits the style and tone of the scene it’s placed in.  We have hard-hitting rock or electronica for the fights, fantastic hip hop or sometimes acoustic guitar for when we view the streets of the city and slums, and incredibly chill and emotional blues sections for when we know shit’s getting real. It’s just amazing work that helps to accentuate each moment that needs it.  This is all the more impressive to me because of how cleverly the music is used, as many scenes have no music at all, accentuating the moments that also needs this. For instance, as Junk Dog approaches the ring for the first first time, it’s only his footsteps that we hear echoing off the walls, building the anticipation until his coach says, “It’s time.” and Junk Dog puts his ear piece in, ready for the fight he is paid to lose.

This show has really grabbed me in these first two episodes but that’s not to say it’s without fault.  Yes, it’s a super dude story and yeah, so far, the constant onslaught of machismo and violent masculinity could definitely turn this series to ideas from anime’s past I’d hope we’d leave there but so far, Megalo Box seems to be balancing this macho storyline well with more interesting and fun ideas.  It very much seems to be the positive underdog story (albeit in a darker world) we’ve come to know and love from this trope that this series itself over it’s past fifty years has helped to shape.  It’s treading similar ground but adding its own unique flair and idea with each step.

This can change, but I’m hopeful it doesn’t.  I’d love to see as this series moves on more surprises than what I’d expect.  I think it’s fine if this anime wants to directly translate Ashita no Joe’s story beats.  However, if it threw a few fresh ideas in there, I think I’d enjoy it all the more.  For instance, to break up some of the machismo, given that Megalonia in this world is open to all citizens, maybe throw in some kickass women boxers to the mix?  Or even have some more interesting situations outside of the ring that can help to break up the drama within the four roped walls we already expect. I guess we’ll see!

I could complain about the realism behind exoskeleton boxing and how no one would really be able to actually take punches with that much force and speed behind them.  I could even complain about the amount of times we see our main character purposefully run his bike off the road in “cool” fashion and many other things he does solely, it seems, for the sake of appearing “cool”.  And as I’ve already said, there are no surprises so far for how this story goes. However, the bottom line, really, is that this show is just so damn fun right now. It’s so freaking cool, from the beautiful cinematography, to the decrepit and almost Mad Max-style construction outside the city, to that hot-damn-where-can-I-buy-that-right-now soundtrack we’ve gotten so far.  And I think that’s what really matters to me thus far.

I’m riding the train, knowing exactly where I’m going, but…

I’m having a blast getting there. 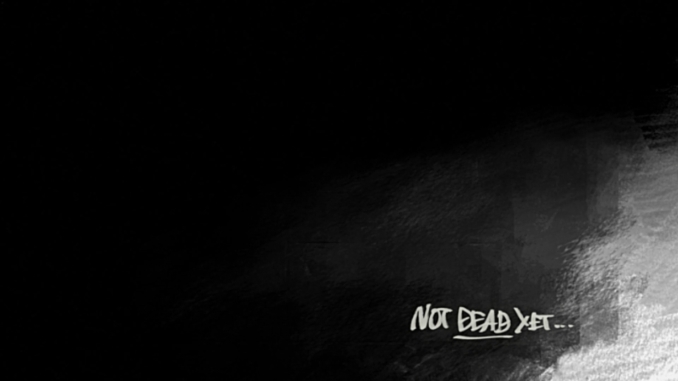