Zaregoto was a total surprise to us – when we picked it, none of us even knew the show existed. Suffice to say, we can pretty easily say now that we’re glad we do now. Join us as we talk about Zaregoto – Nisioisin’s murder mystery set on a secluded island – and get into some of the show’s finer points, like characters talking about nonsense, signature styles of shows and authors, and whether or not you should use a headless body as a stepping stool! A Year of Shaft – A Primer

2016 was the year that I leaned fully into my role in The Backloggers and started taking the blogging aspect of my position much more seriously. It wasn’t the smoothest of starts, but as the year went on and the posts rolled out, I felt progressively more comfortable with the medium, and I put out a number of pieces that I am fairly proud of. However, these posts were few and far between, and I was left feeling as though I could do more, so I decided to put this idea into action instead of my usual habit of planning something at length without actually executing it. For no particular reason other than personal interest, I came up with the idea for this project: A Year of Shaft. This is going to be a twelve post series covering the anime of Shaft, one release for each month of 2017. The anime selected will cover releases by Shaft from 2006 through 2017, with one of the twelve anime from each respective year. I realize that Shaft has produced works from well before 2006, but I was enamored with the idea of doing a yearly, chronological post project, so here we are. The project is not meant as a commemoration of any major event for the studio, but is more a project of personal interest, and an exploration of a studio I have little experience with outside of some of their more widely-known works.

Now, it’s important to note here that the anime I selected for this project is not at all meant to be indicative of the quality of Shaft as a whole, nor is it meant to be a showcase for what I consider to be the “best” works of the studio. On the contrary, when the anime released in each year allows for it, I have opted to try to pick a show that I have not seen before and which is not a sequel series, special, or OVA offshoot of an existing series, unless the year’s offering does not allow for me to abide by these rules. I’ve done this with the intention of going into each series as blind as I can and get a sampling of what Shaft was working on each year, and just getting a feel for it. With that in mind, the first anime in our romp through Shaft’s past works is the 2006 rom-com, Rec.

END_OF_DOCUMENT_TOKEN_TO_BE_REPLACED

With the Winter 2015 Anime Season now coming to a close, I wanted to make a final post about my thoughts of the 2014 Anime Season as a whole. This will be a series of two posts, with this one focusing on the more positive aspects of 2014 anime.

Before I get into the post, I want to explain my reasoning for doing a particular post like this, as some people may just write this post off as me stating my personal opinions on these shows. Although that is partially the reason why those shows made it onto the list, I would like to mention there were several shows that I enjoyed in 2014, but out of all of them, these were the ones that I will personally remember as the years continue on. These are also the ones that I hold in high regards in comparison to all of the other shows of that year, and are shows I could recommend to anyone that is a fan of anime.

END_OF_DOCUMENT_TOKEN_TO_BE_REPLACED 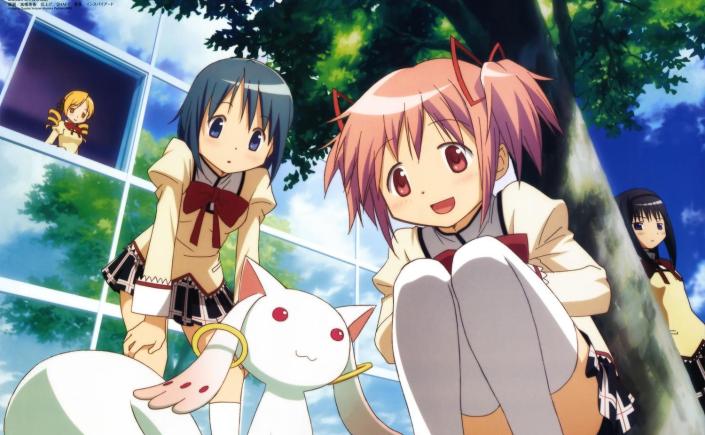 Let’s talk about genre for a second.

Now bear with me, I’ll get to the fascinating twists and the dark plot of Madoka Magica soon, but I want to get a little information across first.  For film genres, or any art form for that matter, there are a few different stages that a film can go through. Generally, it starts with an Experimental Stage, where the genre is starting out and the rules haven’t been made just yet.  As an example, think of westerns before they all typically started having one man for good facing off in a high noon duel against the bad guy.

After they finally establish what works, the Classical Stage begins, which is where all of the tropes and ideas generally come from. Eventually, people get tired of those tropes, though, and start the Parody Stage.  For westerns, this was Blazing Saddles. This stage makes fun of the over-used tropes that start to appear within a genre.

Finally, we get to one of my favorite stages: Revisionism.
END_OF_DOCUMENT_TOKEN_TO_BE_REPLACED