A little over a month ago, the vtuber Mano Aloe quit her job after only a couple of weeks since her debut on YouTube.  While the timing seems surprisingly quick, the reason behind it was unfortunately not quite a surprise.  After weeks of harassment directed towards her and her family, not only online, but at her own home as well, Aloe terminated her contract with the company Hololive and left before she ever really was able to start.

Doxing, the act of intentionally searching for and exposing a person’s personal info, and harassment aren’t new to the Internet.  Historically, whether it was AOL creepers in the 90s, swatters of the mid 2010s, or stalkers now, people online have been subject to terrible and dangerous situations.  We usually think of these as outlier incidents.  However, every community has their stories.  One of the storyboard artists on Steven Universe was harassed into attempting suicide over hate from fans of the show.  Famous YouTuber Philip Defranco had an extreme fan bypass security and walk onto set during a recording of his show.  We as fans of various media and people get excited by the things we love but this can always go too far.  Vtubers are, unfortunately, the new crew that are dealing with this, in their own unique way, and they need help in a way that we can supply.

END_OF_DOCUMENT_TOKEN_TO_BE_REPLACED

Fair warning, while I try to be unbiased to an extent in my discussions, I feel this one is a bit more opinionated than my other ones.  I’m not deeply entrenched in 4chan’s /a/ or other anime communities, so my viewpoint about the terms “waifu” and “best girl” comes from a different perspective.  Anyway, I hope you enjoy reading my discussion!

If you’ve ever watched Azumanga Daioh, there’s a hilarious scene where the creepy teacher of the school, Kimura, drops a picture of a beautiful woman from his coat pocket.  The students pick it up and comment on how she’s very beautiful and looks like a nice woman, wondering who she might be.  The creeper of a teacher suddenly appears from behind them and exclaims in deadpan, broken English that she’s “Mai waifu.”  The students freak out, not only over his sudden appearance, but that such a beautiful and charming woman would be married to a suspected pedophile and scary man.

Originally, the terms “waifu” and “hazu” were borrowed from English in the early 1980s in order to better define modern marriage in Japan as the original Japanese term for wife, “Kanai”, means “inside the house” and the term for husband, “shujin” or “danna”, means “master”.  Obviously outdated, “waifu” and “hazu” were adopted to show a modern expression of equal treatment.  While Japanese otaku definitely would have used the term before, fans of the show Azumanga Daioh thought the juxtaposition of a possible pedobear with a wonderfully nice woman, as well as the teacher’s broken English response, were so funny, the term “Mai 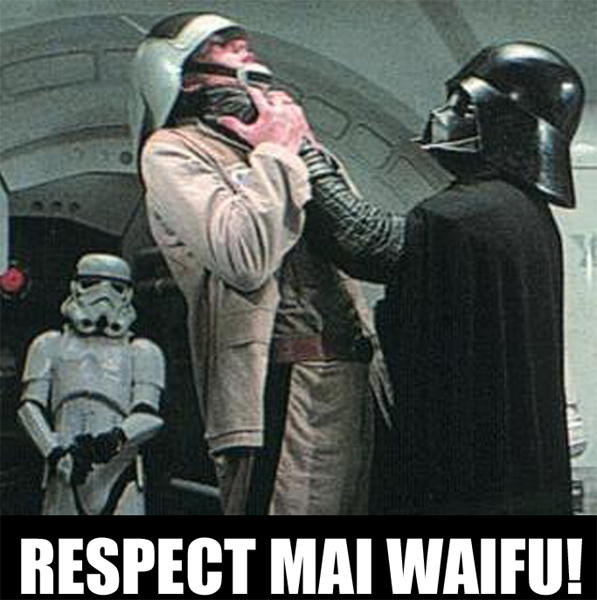 Waifu” came to become a meme for the people of the Internet.  The term means that a female character a person enjoys is so loved by that person, they claim to be “married” to them.  People have also used it to refer to their favorite character in general, disregarding gender and including male characters in a humorous, but endearing way as also their “waifus” and sometimes “husbandos”.  While for some, the level of love towards their fictional character is just a fun aside to their own lives, many on the Internet latched onto the idea of having an actual love interest in their two dimensional favorite characters.  This in itself is not bad as I feel we’ve all been there to certain extents.  I know I personally love at least half of the main characters Joss Whedon has ever written and, given the chance, I would absolutely date Malcolm Reynolds from Firefly and I’m a hetero male.  However, it’s important to note that these fantasies can be taken too far.