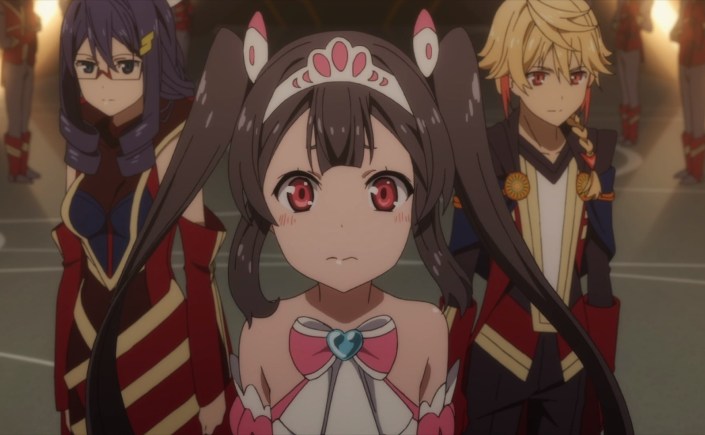 If you’re anything like me, you may have given this anime one glance and thought that it looked like a strange concoction of what people would regard as a “generic fantasy show” with very under-stellar elements regarding animation and effects. There’s nothing really that makes this anime stand on its own from just reading the synopsis and watching the PV. To older anime viewers such as myself, it almost looks like a cross between Aldnoah.Zero and Chaika: The Coffin Princess in terms of both style and elements presented to us throughout the show. Both of those shows were at varying levels of popularity and quality, but I think that while comparing Price of Smiles to those shows may be accurate in terms of plot setup and world-building elements, it’s also disingenuous to say that this show is exactly like either of those, as it does have a wide array of differences in terms of execution and tone that keeps it apart as its own entity.

While first watching, you may think that your suspicions will be confirmed as it’s a show that isn’t striking at first glance and would be very easy for someone to write it off as generic, considering that the promotional materials also do a poor job of displaying what this show has to offer to us as viewers. There may seem to be barely any outstanding appeal to it except to those that already enjoy this sort of “fantasy” world that is set somewhere in the future outside of the nation of Japan. But I also think because of this, there’s plenty of ways for this anime to have its world expanded onto, and I think that’s going to be the main appeal from those that decide to delve into this show despite what the advertisements and previews may be telling us.

One of the primary appeals that captured my attention was the political climate within the show, considering that the show revolves around Princess Yuuki, her advisers and staff, and her childhood friend Joshua, who is to be part of the military for the nation she’s in charge of.

I think that while it may seem obvious that politics will play a major role within the show from the few few minutes of watching, it always comes as a surprise to me when a show wants to focus on something like this, as it can be complicated to portray as interesting when the main way to portray this is based around heavy-dialogue exposition. Chaika: The Coffin Princess was also a notable anime to me that managed to actually make the political climate of its fantasy world interesting to me through both usage of dialogue and world-building elements, which allowed for non-verbal explanations of the politics involved, and I hope that the Price of Smiles can also allow its political universe to hold my attention in the same way if this does indeed become a primary focus of the show.

If it does decide to run with this idea of being a show about the global politics of a ruling nation, then I think this show has a very good chance in managing to hold its ground during the season as something unique and stands out within the collage of shows this season, especially seeing how the winter season itself is both lacking in sequels that overshadow everything else (MHA, Index) and also having few titles that are being anticipated by the general audience (Boogiepop, Promised Neverland).

While I do think that the political aspect is a huge part of Price of Smiles, I also think there’s plenty of appeal to the show beyond that. While the first half of the show was focused on the political climate of the universe that the Price of Smiles had built for itself, it also has a fair amount of the episode dedicated towards Princess Yuuki’s relationship with Joshua and her advisers.

Despite how this show doesn’t have a lot of potential in terms of romantic ventures from what we’ve seen thus far, I think we’ll definitely explore how these bonds between Princess Yuuki and Joshua hold up and experience how their relationship as childhood friends effects running a nation as the events of the show unfold, especially considering how we’ve already been shown in the next episode preview that there’s more to the outside world than our newly crowned princess knows about. There’s definitely a lot of “growing up” to do, something also stated by her adviser Leila as well early on in the show. I think the dramatic turns and relational bonds between the members of her kingdom staff will definitely be focused upon in future episodes, especially considering that while our princess may be optimistic about how the world works, the world itself isn’t as clear-cut and optimistic as she thinks it might be, as likely suggested by the show’s title.

As the surprises and drama begin to unravel, I think it’s also worth mentioning one aspect of the show that definitely surprised me was the focus on the “mecha” battles that were showcased within the first episode, an aspect that heavily reminded me of Aldnoah.Zero‘s way of using “mecha” battles to further the political narrative. The structure of both Aldnoah.Zero and Price of Smiles manages to have a lot of similarities in plot despite being vastly different in tone. Everything from the nature of the world itself being separated from the actual entity of “Japan”, to also having large sequences dedicated to fighting in these “mecha” devices to solve political disputes, something that the Price of Smiles will seem to continue to do as well. I was legitimately impressed by the first “mecha” battle within Price of Smiles itself, perhaps not having the same level of impact to it as Aldnoah.Zero solely because of the lack of Hiroyuki Sawano’s soundtrack, but still impressive nonetheless coming from a show that I expected not much out of in terms of visually engaging and strategical “mecha” battles.

As far as Price of Smiles goes, I’m sure that as the show continues we will start unraveling many of the mysteries behind the political climate of the show and more details about the world itself. Without a doubt, the unraveling of those mysteries will also come with dramatic reveals and heart-wrenching moments that I’m sure will let the title of the show speak for itself.

I think that if given the chance, this show will allow us to deduce for ourselves what exactly the “Price of Smiles” truly is.

2 thoughts on “[Season Sampler] The Price of Smiles 1 — Nothing Ventured, Nothing Gained”