In previous episodes, we’ve seen Tanya constantly struggling to have more influence over “Being X” than it does over her, and episode 6 was yet another beautiful example of this. Youjo Senki seems to definitely be letting the viewer decide which side is actually the “good” or the “evil” sides, as both sides have their own stories to tell. This can be seen throughout most of the show, with “Being X” forcing these continuous brutal punishments upon her for just merely not believing in a higher power, and also in the past two episodes, seeing a more light-hearted and less merciless side of Tanya than ever before. Similar things could be said about the escalating war between nations. Which side is actually the “evil” one and which side is “good”?

Episode 7 seems to go back to its roots, making the morality of war more clear-cut than it’s ever been. It’s almost reminiscent of the way Episode 1 opened up the series, re-establishing that Tanya is absolutely a ruthless person that needs to be feared, instead of having these moments of softness that Tanya expressed to her military comrades in the previous episode. We’ve also had a lot of morally ambiguous characters that we either don’t have enough information on them to make a proper judgement, or have been minor characters that never had large enough roles to play to truly know how far their ethics reached. Although in this episode, a recently promoted Entente soldier, Anson Sioux, is the first well-established character to have some clear morality to his actions. In episode 6, Sioux had watched his entire battalion being brutally slaughtered by Tanya’s company of Empire mages, which led to his promotion to colonel within the Entente army ranks. Episode 7 begins by showing us the reason he’s fighting in the first place, to protect the ones that he loves most, his wife and his daughter. While we don’t get too much detail about his character, it is unique in regards to anything the show has offered to us before in terms of character motivations. 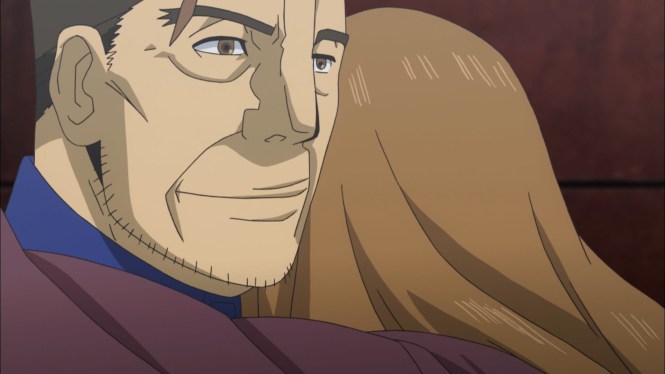 When the episode starts with a hug, you know shit’s gonna get real.

Most of the main characters, such as Tanya and some of the higher ranking soldiers of the Empire, have had their stories or actions told to us in a way that has shone them in an ultimately negative light. Colonel Sioux is different, clearly showing how he’s fighting for something more upright than personal revenge or unwarranted killing. This is a large change in the series, as the series is full of characters with mixed, evil, or just selfish motivations. Seeing the narrative focus on a soldier fighting for a noble cause may seem unusual, especially for a show called “The Saga of Tanya the Evil”. However, this sharp contrast with this highly selfless character against the selfish and maniacal actions of Tanya really just emphasizes the amount of evil she is when it comes to proving her own pride to the Empire. These two leaders of armed mages face off against each other in what is considered the decisive battle of the Entente lands, with the battle being a high-stakes mission for both sides, allowing the winning army to deal a crushing blow to the loser.

The anime frames this as a high-stakes battle, making sure that the music is heavily present during the battle itself, creating this very ominous and heavy mood surrounding this battle where an entire country’s fate is on the line. Tanya may think of this battle as no different than a standard battle for the Empire, as the Empire would only be delayed in their plans to overtake the Entente lands, but the Entente army sees this battle as a life or death situation. Because of this, the mood of this battle has been heavier than every battle since the one in Episode 1, although this battle has significantly more impact just because we have a frame of reference for the fighting being shown to us. The battle has also been framed in such a way to show this duality between the good will of the Entente soldiers, defending their homeland until their last breath, and the crushing might of the Empire, demonstrating their brutal force to demolish anything in their path to reach their goal. To emphasize this, there are many parts of the battle that are framed similarly for both armies, showing the viewer how these nations view the same battle drastically different from each other. This directing technique is simple, but effective in presenting these differences between Tanya and Sioux’s methods of fighting, tactics, and reasons they chose to fight in this war. 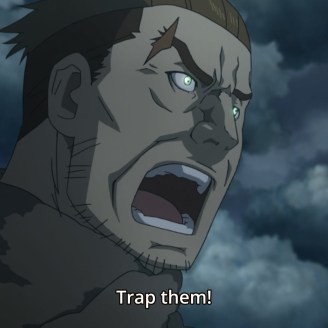 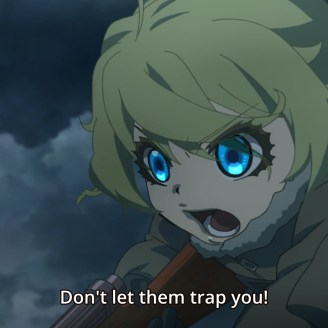 As the battle continues, Sioux becomes enraged at Tanya’s presence because of the prior battle against her in episode 6, the one that took the lives of his former battalion, and is also enraged at the fact that Tanya’s helping change the tides of this war in favor of the Empire by eliminating Entente. Upon this realization though, he utters a single phrase, “God… why?”. This could be interpreted a number of different ways, such as him begging God for mercy upon the lives of himself and his soldiers, but it’s not implausible that his faith in God has diminished because of this twice-in-a-lifetime encounter with the “Devil of the Rhine”, as Tanya’s been aptly named. Whichever interpretation you choose to believe though, the most interesting part of this is that “God”, which could easily be replaced with “Being X” in context of this show, seems to be on neither of those sides, as this deity doesn’t seem to be assisting the Alliance Nations, nor is it assisting Tanya or the Empire. However, Tanya consistently proves many times within this episode alone that she doesn’t need any assistance from a deity to win her battles, minus her usage of her god-like powers to land the final blow on Sioux.

This usage of her powers wasn’t all that flashy or destructive compared to ones we’ve seen in the past, but in terms of mere impact, surpasses any other instance we’ve seen thus far. Although judging from the scenes that followed, this seems to be intentionally done on the show’s behalf, emphasizing how little Tanya cared about Sioux and how easy he was to defeat. The scene that follows the final blow shows Sioux falling into the bay, likely not being able to receive any recognition for his heroic efforts to push back the Empire to save his countrymen and his family, and as if that wasn’t cruel enough, Tanya fails to even recognize who this guy is, which makes throwing his life away on a selfish revenge attack completely wasted. She even takes his most precious weapon, a Christmas gift from his daughter, from his falling corpse, promising that it’ll make a good Christmas present for herself.

Taking a supporting character, successfully weaving them into the narrative of the story, and having me still care about them is an accomplishment. Well done.

In comparison to episode 1 concerning Tanya’s evil qualities, these events within episode 7 strongly confirm exactly how evil Tanya can be. I would even say that this would have made a much stronger episode 1 in showing Tanya’s qualities more so than episode 1 ever did.

Even if the “valiant soldier fighting for his country dies in battle” has been used in many forms of media before, this episode successfully created a character drama that made me enjoy this episode far more than I would have without it. On top of that, the story of Anson Sioux’s life as a soldier was integrated into the narrative in a way that made it both significant and relative to the overall narrative of Tanya’s struggle with “Being X”. This dramatic episode created a tonal difference from all of the episodes before it and really showed how brutal the acts of the Empire during this war actually are. It also assisted in exhibiting this change in the narrative structure of the series, proving that there’s a lot more variety to this show than just flashy battles and religious subtext, although all of that is still present within this episode, even if there’s less emphasis on those than usual.

Episode 7 has probably been one of the most promising episodes of Youjo Senki yet, and I would love the show to continue on with these types of episodes. Even if the episodes return back to their normal topics of discussion though, I think this episode will be considered my favorite, as I greatly appreciate the tonal changes and outlooks on the narrative that this episode brought to the series.