How about we play a game?  I transport you to an alternate dimension with amazing powers and then do you promise to learn your lesson?

I’d have to say that the second episode of Youjo Senki was a very interesting twist from the first. The idea of God (or Being X as Tanya calls him) giving our salaryman protagonist a second chance through trial by almost literal fire was a nice way to take what I initially thought was a simple but interesting idea and layering more and more interesting levels onto it.  However, while we did get some much-needed explanation and characterization, as GeneralTofu pointed out, we also had more questions.  What is The Empire and how does it function?  What changed Tanya to invoke God’s name even through she adamantly has been against him, even denying the existence of a God.  Well luckily, we’re starting to get the answers.  Episode three explains to us primarily two things:  That The Empire is a meritocracy and that Tanya has been forced into her newfound religious slogans.

The meritocracy is an interesting choice, as it fits Tanya perfectly.  As the reincarnation of someone who believed merit and adherence to rules were the only true “god”, a government completely based around advancement through someone’s own hard work and skill is well beyond coincidental, especially given the name of the episode and its catchphrase throughout: “God’s Will…” It seems the omnipotent Being X is being very benevolent in giving Tanya more than a fighting chance and it shows.  After receiving her award at the end of episode two, she moves through ranks in this episode as well as positions, going from weapons testing, to commanding in the front lines (catching up to episode one), to the future work of teaching and training at the academy.  While there are moments along the way where she is tested, by her own merit and mentality, Tanya is advancing incredibly fast, especially for what should be just a small child in the military. 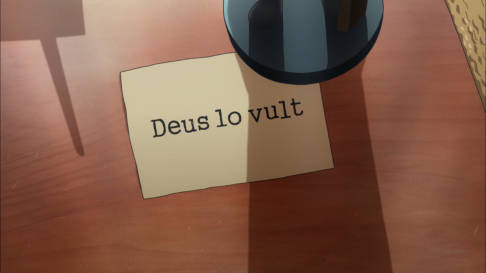 “God wills it”  Probably the sickest calling card ever.

Speaking of being tested, we also receive our answer to why Tanya has made a seemingly 180 degree turn from her religious doctrine in episode one to the “atheist in the presence of God” mindset we see in episode two.  Being X comes back in a big way (and in a small way as a wooden nutcracker soldier) by restricting Tanya’s use of her newfound magical amulet. Seemingly annoyed by Tanya’s unwillingness to learn from her “sin” and denouncing God’s name, Being X sets it that the only way for her to use her extreme powers and abilities given to her by her newfound amulet is to praise His name and pray for His support.  Tanya is not happy about this but she learns to go along with this new rule in order to adapt, ignoring the meaning behind the words as she curses Being X for altering the deal.

Just like the biblical Job, we’ve stripped our salaryman of his possessions and everyone he knows, forcing him into a depressing and struggling situation where he should be repentant. However, unlike Job who was set up to fail, Tanya has been set up for success from the get-go, so much so that I’m not sold on the premise for this show so far.  In fact, this whole scenario seems a bit misguided or broken.  The story is at least making it interesting, with God working in mysterious and smaller ways to challenge Tanya and force her to struggle.  Still, if the purpose of the test is to put this salaryman through a scenario where he is desperate to struggle and survive so that he may find faith in God, why would God give the man incredibly powerful magic?  Giving him an edge in a world where there are normal humans only rewards and assists a person that is supposed to already be in the wrong, furthering his justification of his actions.  We could assume that maybe given that the rules to the game are set to seem unfair, God was being merciful and gave Tanya a fair chance.  However, Tanya is clearly more powerful than other mages and not just by her own skill; her innate ability is far beyond others. Even if she has to humiliate herself to use her full potential, that seems more petty than detrimental or definitively a struggle for her.

There’s also the issue of the The Empire and its fundamental philosophy:  Advancement through following the rules and exhibiting exemplary merit.  Any other system or government would have challenged Tanya and allowed her to struggle but giving her exactly what she craves in a society is just par for the course as far as she’s concerned, and it’s enabled her to fast-track herself through the ranks, very quickly working herself higher and higher.  The show itself even points this out whenever Erich von Rerugen mentions to the higher ups that given her quick rise, her darkly twisted mindset, and the fact that she is the only person in the empire who can command the power of her amulet, Tanya is a future threat to their rule.  Giving Tanya this much advantage is setting her up to succeed, not the other way around, and though she is challenged every now and then, the system itself plays directly into what she needs to win, allowing her to never learn from her mistakes and continue vilifying the God who gave her the power and opportunity she never had.

That’s not to say that this isn’t still within the plan that an omnipotent being is using to test a Doubting Thomas (though, I guess that allegory doesn’t work if Thomas can literally see God and still refuses).  From what we’ve seen, and given that even Tanya herself remarks that it had been ten years since she last spoke to Being X, the Alpha-Omega is definitely playing the long con.  If that’s the case, though, the pay-off for this much helping of Tanya would have to be some Twilight Zone levels of irony in order to work for this series.  At least the irony so far has been good.  Everyone that Tanya even touches seems to be either finding God or strengthening that bond as we see the initially atheist engineer in charge of her amulet, Viktoriya, and even Lieutenant Schwarzkopf in charge on the frontlines sporting their love for the Lord above.  Plus, there have been a few scenes of Tanya, normally calm and collected in her military uniform, embarrassed and humiliated by something so simple as a dress. 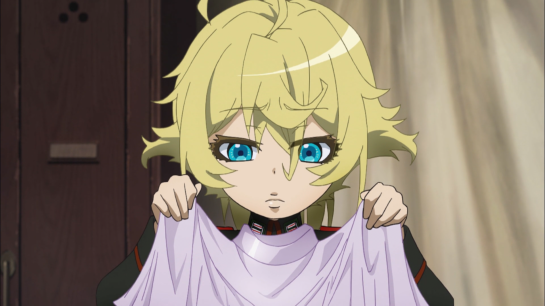 I’m very much excited to see where this series goes.  While I may seem hard on the show, I do realize it’s not even close to over and there has been some interesting growth.  I mean, Tanya even was nice to someone for once!  (Though, she brushed it off as faking it in order to appear like she cares.)  Plus, we’re only three episodes in and I’ve had this much to talk about so this show is definitely doing some things right.  Leading into the next episode, it seems Tanya will be possibly teaching and being a hardass to new officers at the academy. It also seems like Being X is setting her up to head back to the front-lines (or even farther into enemy territory) with her own spec ops team.  The story definitely seems to be building and while we’ve had a few questions answered, I’m excited to see if we learn more about the different factions in this war as well as find out what’s in store for our sinner in the hands of an angry God.

She probably has a learned hate for Tchaikovsky now.